Scientists have found a new species of choanoflagellate. This close relative of animals forms sheets of cells that “flip” inside-out in response to light, alternating between a cup-shaped feeding form and a ball-like swimming form. The organism could offer clues about animals’ early evolution.

A new species of choanoflagellate inverts from a ball of cells with tail-like flagella pointing out to a cup-shaped form with flagella inside. The species may use the ball form for swimming and the cup form for feeding. Credit: T. Brunet, B. T. Larson, T. A. Linden et al./Science 2019

When researchers in Nicole King’s lab looked through a microscope at the strange organisms they had collected in Curaçao, they saw sheets of cells clustered together in a pattern that resembled skin. That was unusual enough, since these organisms are normally loners. But then they did something really bizarre: The sheets “flipped” from a shallow cup shape into little ball-like structures and starting swimming around.

“It was fantastic,” says King, a Howard Hughes Medical Institute Investigator at the University of California, Berkeley. No one had ever seen such coordinated movements in these tiny aquatic microbes, known as choanoflagellates. The simple-looking organisms share a common ancestor with animals and may hold clues to how early animals evolved. King’s team reports their discovery of the new species, Choanoeca flexa, and a detailed description of its acrobatic maneuvers October 17, 2019, in the journal Science.

King says it’s fascinating that single-celled organisms can act together to change shape. But figuring out how they do it, she adds, ­and finding molecular building blocks that may also have been used by early multicellular life is even more exciting.

Choanoflagellates inhabit the no-man’s-land of protozoans – creatures that are clearly not bacteria, but also don’t qualify as complex multicellular life, like plants or animals. Each choanoflagellate cell has a taillike flagellum surrounded by a ring of tiny hairlike structures, like a sperm cell wearing a fluffy Elizabethan collar.

King and her team were in Curaçao in 2018 as part of a program that brought laboratory scientists into the field to spur new ways to study microscopic life. The team decided to survey Curaçao’s choanoflagellates, to try and describe the organisms’ diversity on the Caribbean island. “You can find choanoflagellates in any kind of water around the world, pole to pole,” King says. 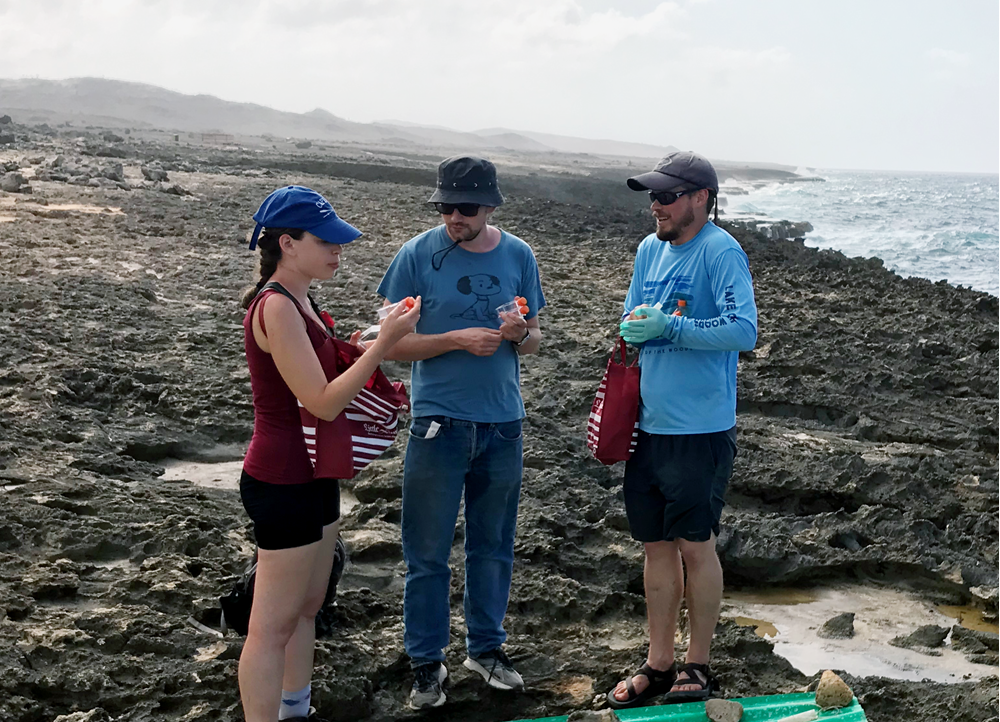 Indeed, the team found choanoflagellates of the usual kinds in the island’s waters – but the new species appeared only in the harsh environment of splash pools, which are filled by the spray of crashing waves and pummeled by near-constant wind.

Back in the laboratory, the team found that C. flexa cells form sheets in which all the cells’ flagella point in the same direction – just like epithelial cells, which make up skin and many tissues in animals. King notes that these were probably the first tissues to evolve in animals.

When C. flexa’s sheets curl up into a ball with the flagella pointing outward, the ball swims quickly by waving the tail-like structures. Or the sheet can flip into a cup shape by unfolding and then curling in the opposite direction, in such a way that all the flagella face inside. “In this form, it’s really good at catching bacteria,” King says. Sponges, one of the earliest lineages of animals to evolve, use a similar structure to feed.

In this video, life abounds in freshly collected water from a pool fed by ocean spray in Curaçao. Smaller, oval-shaped dinoflagellates zip about as colonies of C. flexa choanoflagellates curl into balls, then revert into cups. Credit: T. Brunet, B. T. Larson, T. A. Linden et al./Science 2019

The scientists were curious how C. flexa performed its “flips” ­– and why. The first clue came when King’s team tried switching the microscope light on and off. In the dark, the organisms inverted from cups into balls and started swimming around – yet choanoflagellates were not known to be responsive to light.

A series of experiments revealed that the organism reacts to light using a light-sensing protein and other molecules, some of which C. flexa must obtain from the bacteria they eat. What’s more, King’s team figured out the precise mechanism for the flip: the cells simultaneously flare their collars into a cone shape, bending the sheet of cells and causing a contraction similar to that of an animal’s muscle. This inspired the team to look at other choanoflagellates, some of which turned out to have the same ability. The finding suggests this particular contracting mechanism likely pre-dates the first animals, King’s team reports.

Such detailed mechanistic work is a great achievement, says Patrick Keeling, an evolutionary microbiologist at the University of British Columbia. One of the biggest blind spots for scientists studying protozoans is how to understand their behavior, he says. “So every system where you can start to pick apart the molecular mechanisms of behavior is extremely valuable.”