A Giardia parasite engineered to express its extensive wardrobe of surface proteins worked as a vaccine that could help prevent or mitigate future intestinal infections. 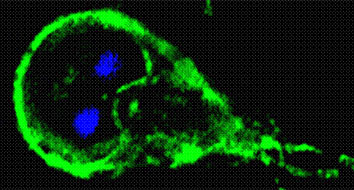 The intestinal parasite Giardia lamblia changes outfits nearly as often as a fashion model on a Parisian runway. With more than 200 protein coats in its molecular wardrobe, this troublesome creature—the cause of innumerable cases of diarrheal infections each year—can change its appearance from one instant to the next, throwing the body’s immune cells off track.

Now Hugo Luján, a Howard Hughes Medical Institute international research scholar, reports that Giardia’s extensive wardrobe of surface proteins might actually be its own downfall. In an advance online publication in the journal Nature Medicine on April 25, 2010, Luján shows that Giardia parasites engineered to express all their surface proteins worked as vaccines that could help prevent or mitigate future infections. The same “overdressed” parasites offer protection when given orally to gerbils infected with Giardia, he says, though the idea still needs to be tested in humans.

These proteins help the parasite survive but we’re planning to use that armor to make new, oral vaccines.

Luján believes Giardia’s hardy surface proteins—which help the parasite thrive in the harsh, acidic environments of the stomach and upper intestine—might eventually be used to deliver vaccines not just against Giardia but other parasites too, including malaria. “They could allow us to save money and lives,” he says. “These proteins help the parasite survive but we’re planning to use that armor to make new, oral vaccines.”

A professor at the Catholic University of Córdoba, in Argentina, Luján’s fascination with Giardia dates back to his days as a postdoctoral fellow in parasitology, working with Theodore Nash at the National Institutes of Health. Luján remembers being intrigued by Giardia’s simplicity. Confining the parasite to a culture tube had no effect on its lifecycle, which made it easy to study and manipulate the organism. Upon returning to Argentina, Luján continued his research on Giardia, and in 2008, he reported that the shifty organism changes its appearance between 200 different protein coats using a molecular process called RNA interference (RNAi). As proof that RNAi was critical to the bug’s “invisibility,” he disabled its RNAi mechanism, and found that all the surface proteins appeared at once.

Luján reasoned that this genetically-altered parasite might make an optimal vaccine. Ordinarily, children in developing countries suffer the most from routine Giardia infections, which they usually get from drinking contaminated water. Adults rarely get as sick because they have built up immunity from earlier contact with the parasite. Luján’s hypothesis was that a child exposed to all Giardia’s surface proteins at once would be primed to resist any future infection.

Luján’s team tested out the hypothesis on gerbils, which are a good model for scientists because they can be infected with the same Giardia parasites that attack humans. Those exposed to parasites expressing just one surface protein were re-infected easily by parasites expressing a different surface protein. But gerbils that had been exposed to a strain of Giardia that expressed all 200 surface proteins were less likely to be reinfected. Another welcome surprise was that the isolated proteins were non-toxic and elicited an immune response. According to Luján, this is the first time researchers have generated a vaccine purely from proteins, which can be stored at room temperature and delivered orally, both necessities for a vaccine that can be easily delivered in the developing world.

Luján plans to leverage the proteins’ resistance to gastrointestinal enzymes by testing whether they can ferry other oral vaccinations into the body. In many cases, the surface proteins expressed by infectious pathogens are destroyed in the gastrointestinal tract before the immune system has a chance to respond. That’s in part why oral vaccines for illnesses like malaria haven’t been practical. But if attached to surface proteins from Giardia, Luján says, these antigens might survive in the gastrointestinal tract long enough to be recognized by the immune system.

“This could be a huge development,” says Luján, who recently filed a patent application on his research with the U.S. Patent and Trademark Office. “Hopefully, we’ll be able to use this system to make vaccinations that we can give in a very convenient way. Giardia’s surface proteins are fascinating, and now we’re finding that we can exploit what the parasite uses to defend itself to our own favor.”