Researchers may be on the verge of exploiting the vulnerabilities of a virus that causes cervical cancer, thanks to a newly developed technique that enables scientists to mass-produce human papillomavirus in the laboratory.

Researchers may be on the verge of exploiting the vulnerabilities of a virus that causes cervical cancer, thanks to a newly developed technique that enables scientists to mass-produce human papillomavirus (HPV) in the laboratory.

HPV, which exists in more than 100 forms, is the most prevalent sexually transmitted infection. Transmission of HPV can also occur non-sexually. According to the Centers for Disease Control and Prevention, approximately 20 million people in the United States are currently infected with HPV. At least 50 percent of sexually active men and women will acquire genital HPV infection at some point in their lives. By age 50, at least 80 percent of women will have acquired genital HPV infection.

We couldnt pursue a number of experimental approaches because of the small amounts of virus available.

Although the infection is usually harmless, certain types of HPV are responsible for nearly all cases of cervical cancer, and other types contribute to about a quarter of head and neck cancers and some skin cancers. A more common, less virulent form of the virus causes genital warts.

Using the new technique scientists can quickly produce a thousand times more infectious virus per culture dish than they could using conventional methods. Researchers are hopeful that this advance could lead to new antiviral drugs and to vaccines that would trigger the immune system to attack at an earlier stage in the virus's life cycle to stop HPV before it can replicate. 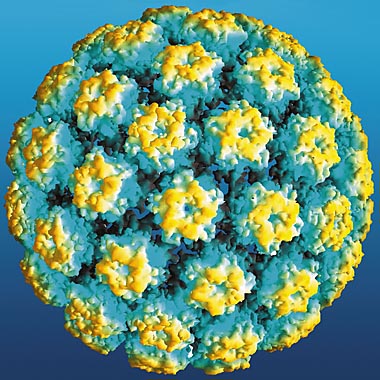 The researchers, led by Paul Ahlquist, a Howard Hughes Medical Institute investigator, published an article describing their new technique on June 13, 2005, in the early online edition of the Proceedings of the National Academy of Sciences . Ahlquist and co-authors Dohun Pyeon and Paul Lambert are at the University of Wisconsin-Madison.

The primary obstacle to producing HPV in the laboratory has been that in the early stage of its infective cycle, the virus lurks in undifferentiated basal epithelial (skin) cells, said Ahlquist. Once there, it remains in a diffuse form at low levels, limiting its visibility to the immune system.

Only after the epithelial cells begin differentiating does the virus emerge as distinct, infective viral particles, called virions. Thus, said Ahlquist, infectious HPV virus particles could only be obtained by laboriously differentiating cultured cells into artificial skin. This process takes weeks, and produces small amounts of virions, which permitted only limited study of the virus, said Ahlquist.

“The available culture techniques limited the ability to study critical early stages of infection,” said Ahlquist. “We couldn't pursue a number of experimental approaches because of the small amounts of virus available,” he said. “Also, we were restricted in genetically manipulating the virus because the available approaches required a fully functional viral genome to make infectious virus.”

Two discoveries made it possible to develop a mass-production technique for the virus, said Ahlquist. Researchers had long known that the HPV capsid proteins, which were necessary for virion formation, could self-assemble. Also, said Ahlquist, John Schiller and his colleagues at the National Institutes of Health recently found that by introducing the genes for these self-assembling capsid proteins into cells along with smaller pieces of target DNA, the target genes could be packaged into viral like particles.

Based on these findings, Ahlquist and his colleagues developed a technique by which they could introduce the full HPV genome along with the genes for HPV capsid proteins into human cells and manipulate them to produce active, infectious viral particles. The resulting technique enables the scientists to produce over a thousand times more infectious virus per culture dish and takes only two days, he said.

“With this new system of mass-producing packaged, replicating virions, we also can create mutations at will in the virus genome and recover these mutant genomes in infectious virus particles, to study their effects on the virus's ability to infect its target cell,” said Ahlquist.

Importantly, said Ahlquist, the system successfully produces multiple types of HPV. “We found no specificity of this technique, and there appears to be no reason this method cannot be extended to other subtypes,” he said.

The researchers plan to use their production technique to study the early process of infection and to search for vulnerabilities in that process, said Ahlquist. “The early stages of infection—before the virus becomes established—could be a very important phase for intervention,” he said.

Ahlquist also said that the production technique could offer a way to screen for HPV antiviral drugs and could lead to enhanced vaccines that consist of live attenuated virus. “Current vaccines in clinical trials consist of capsid proteins and trigger an immune response to those proteins,” he said. “However, in its earliest stage, papillomavirus does not express those proteins, making the virus invisible to that immune response.

“A sufficiently non-virulent, attenuated virus that would express early gene products could raise additional immune responses against the virus in other stages of its life cycle.” Such a vaccine, he suggested, could offer further important advantages against HPV and its associated cancers.