Researchers learn more details about how CRISPR works in cells. 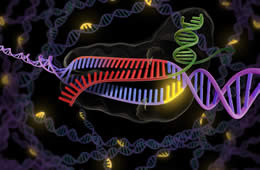 CRISPR/Cas9, a defense system that bacteria use to protect against invading genetic elements, was adapted by scientists in 2012 as tool to edit genomes in the lab. The new technology has been adopted enthusiastically by the research community because of its ability to cleave target sequences of DNA with remarkable precision and efficiency. Now, after directly watching individual Cas9 enzymes explore DNA inside living cells, Howard Hughes Medical Institute (HHMI) scientists report that they have a better understanding of how Cas9 speeds through this task, testing out potential targets but quickly moving on from those that are not an exact match.

The research, published November 13, 2015, in the journal Science, was co-led by Robert Tjian, president of HHMI; Zhe Liu, a group leader at the Janelia Research Campus; and Jennifer Doudna, an HHMI investigator at the University of California, Berkeley, who is one of the inventors of the CRISPR-Cas9 genome-editing tool.

“CRISPR-based genome engineering offers exciting prospects for curing human disease as well as for advancing agriculture and synthetic biology,” said Doudna. “These studies provide a detailed mechanistic picture of the CRISPR machinery as it operates in living cells, helping to advance both fundamental understanding as well as application of the technology in mammalian cells.”

In both the naturally occurring bacterial defense system and in the CRISPR genome-editing tool, the DNA-cutting Cas9 enzyme is guided to its target by a 20-letter piece of RNA that matches a sequence of DNA embedded within the genome. When Cas9 and its guide find the complementary sequence, they bind to the target and cut. In the laboratory, Knight says, target sites are cut within a few hours of introducing the Cas9 complex to cells.

Previous experiments had demonstrated that Cas9 doesn't bind exclusively to its true targets, however. A match of just 5-8 letters of genetic code is enough to cause what the scientists call off-target Cas9 binding. Off-target cutting, however, is much rarer. If a sequence that Cas9 binds to does not fully match its 20-letter guide, the enzyme almost always releases the DNA and renews its search.

“A longstanding question was how can Cas9 scan vast eukaryotic genomes, which have billions of DNA bases, and find a target in a timely manner if it's binding at every off target?” says Spencer Knight, a graduate student in the Doudna and Tjian labs who is the first author of the Science paper.

To see if they could answer that question, Knight and other members of the team used single-molecule imaging to track individual Cas9 molecules as they drifted through the nuclei of living cells and interacted with DNA. The researchers wanted to examine how Cas9 behaves when it interacts with off-target DNA, so they prepared a “nonsense” guide—one that had no perfect match in the genome. They engineered mouse cells to produce the nonsense guide, along with Cas9 proteins tagged with a fluorescent label. Then they followed the fluorescence under a microscope to track the precise movements of the Cas9-nonsense guide complexes.

“By starting off with this nonsense guide, we got a better idea of what a lot of these off-target bindings look like,” says Knight. They found that each Cas9 complex drifted freely through the cell nucleus, pausing occasionally when it collided with a segment of DNA that looked like a potential match. But these pauses were fleeting, typically lasting milliseconds to seconds. This quick interaction explains how Cas9 manages to find its target quickly, despite the off-target binding that frequently interrupts its search.

“This protein is doing a lot of three-dimensional diffusive exploration, very briefly engaging at off targets, and then moving on,” Knight says. “This gives us a clue as to how Cas9 can function efficiently.”

What's more, he says, when considered with complementary findings from Doudna's lab published in Nature on October 28, 2015, the new findings help explain why Cas9 rarely cuts in the wrong place, despite its frequent off-target binding. In that work, graduate student Samuel Sternberg and colleagues showed that after Cas9 binds to DNA, the enzyme has to rearrange itself into a new conformation before it can cut. Cas9 bounces off off-target sites so quickly that it has no time to adopt that active configuration, Knight says.

Knight and his colleagues were also curious how Cas9 searches for a target within tightly bundled regions of DNA. This less accessible form of DNA, known as heterochromatin, helps keep genes switched off when they are not needed. Bacterial DNA is not packaged in this way, but in higher organisms – such as the plants and animals that researchers may wish to modify with the CRISPR system – large portions of the genome lie in heterochromatic regions.

“As a protein that evolved in bacteria, Cas9 never had to encounter these kinds of environments,” Knight says. The team's experiments showed that heterochromatin did slow down Cas9's exploration, but the enzyme persisted. “Cas9 moves much more slowly as it navigates heterochromatic regions, and it tends to under-sample these regions,” Knight says. In genome editing applications, CRISPR/Cas9 can successfully edit targets in heterochromatic regions of genomes, but the enzyme is likely to be less efficient in these areas than it is in more open regions, he says.

The new Science and Nature papers come on the heels of an earlier Nature paper in which Doudna’s group described the precise molecular structure of another component of the CRISPR system, a protein complex that integrates small bits of foreign DNA into a cell's own genome. The structure, published October 22, 2015, in the journal Nature, reveals how the complex interacts with those bits of DNA and provides important clues that could guide the development of new genome-editing tools.

In that study, Doudna and her colleagues focused on the molecular guards of the CRISPR immune system—proteins called Cas1 and Cas2. Cas1 and Cas2 work together to police the cell for new invaders, capturing bits of foreign DNA and integrating them into CRISPR sites, where they become the cell's record of previous infections. The length of these inserted bits varies according to species, but is remarkably uniform within any organism's own CRISPR system.

Last year, Doudna's team determined the structure of a Cas1-Cas2 complex, showing that it is made up of two Cas2 molecules flanked by two pairs of Cas1 molecules. To understand how the complex selects its targets, however, they really needed to see Cas1-Cas2 interacting with DNA.

They knew that in the E. coli bacteria they were working with, each piece of invader DNA inserted into CRISPR loci spanned 33 letters of genetic code, so they let the two guard proteins mingle with strips of double-stranded DNA of exactly that length. But Cas1 and Cas2 never took up the DNA. Graduate student James Nuñez began to experiment with different types of DNA molecules, and hit upon a size and shape that was favored by Cas1-Cas2. “Instead of having perfect double-stranded DNA, we chewed it up a little bit so there were single-stranded overhangs on the ends,” he explains.

In test tube experiments, Cas1-Cas2 readily grabbed onto 33-nucleotide-long DNA molecules with these overhanging ends and efficiently integrated them into CRISPR loci. The scientists crystallized Cas1-Cas2 together with the DNA, and determined the structure of the whole complex with x-ray crystallography.

The structure revealed that the Cas2 molecules at the center of the complex form a curved binding surface just long enough for a 33-nucleotide DNA molecule to stretch across its surface. This positions the DNA so that each of its overhanging ends inserts into Cas1through a channel, readying the entire complex for integration of the foreign DNA into a CRISPR locus.

“This tells us that Cas1 and Cas2 really function as molecular rulers in the cell,” selecting DNA molecules of just the right length for integration into CRISPR sites, Nuñez explains. The structure also makes it clear that single-stranded DNA ends are needed for Cas 1 and Cas 2 to integrate a sequence into the target site in the genome.

Together, these observations suggest an opportunity to program the Cas1/Cas2 system for genome editing. “Can we give these proteins a 33 base pair DNA of our choice and have it integrate into a site in a mammalian genome?” Nuñez asks. “The bottleneck was that in order to do those experiments, we need to be able to give these proteins a DNA that they like to bind.” With their new understanding of the proteins' structural criteria, he says, “we feel like we have that now.”