The protein behind fragile X syndrome, a leading cause of autism and intellectual disability, controls a suite of genetic regulators. 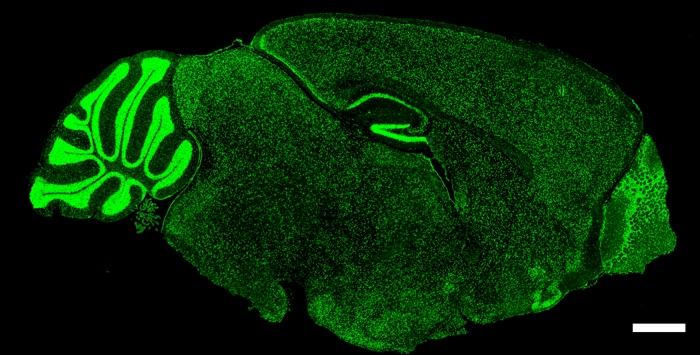 The protein behind fragile X syndrome acts as a genetic conductor, orchestrating a symphony of genes that help shape DNA’s 3-D structure.

Fragile X mental retardation protein, or FMRP, oversees a set of genes that alter how DNA is packaged, researchers report September 7, 2017 in the journal Cell. This is an important new role for FMRP, and may ultimately reveal novel ways to counter fragile X. In the syndrome – an inherited disorder marked by developmental delays, intellectual disability, and sometimes autism – FMRP isn’t around to do the overseer’s job.

Study leader Robert Darnell, a Howard Hughes Medical Institute (HHMI) investigator at the Rockefeller University, calls the findings “an exciting step toward a different kind of treatment approach,” but cautions that the results, from studies of mice, are preclinical.

Scientists have studied FMRP for decades, but how its absence leads to fragile X syndrome hasn’t been completely clear. Earlier studies by Darnell and others showed that FMRP manages the production of a slew of proteins found at nerve cell connections called synapses. For years, scientists thought that manipulating these synaptic proteins might ease some of the abnormalities caused by FMRP’s absence. It’s a promising approach, Darnell says, but it “hasn’t borne fruit yet.”

Instead, he and colleagues focused on a different role for FMRP – regulating the synthesis of proteins that alter DNA packaging. His team’s previous work had hinted that FMRP controls a group of proteins called epigenetic regulators. These proteins help wind strands of DNA into complex structures called chromatin. Looser packaging allows genes to become more active, while tighter packaging keeps genes quiet. In this way, chromatin-shaping proteins can control gene behavior.

But no one knew just how big of a role FMRP played in this process. Now, Darnell’s team reports that FMRP sits at the top of a protein manufacturing plant ­– actually supervising the production of proteins that control genes. FMRP is like a CEO overseeing a vast team of VPs, Darnell says. And when the CEO goes missing, the VPs go wild. 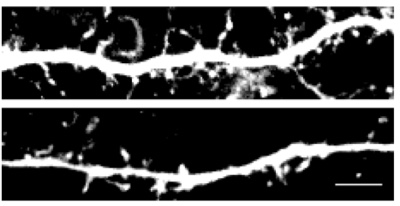 One such VP is a protein called Brd4, which adjusts the activity of other genes. When researchers engineered mice to lack FMRP, Brd4 was free to monkey with genes’ activity levels. Scientists already have a drug that can curb Brd4’s actions – a small molecule called JQ1 that prevents Brd4 from binding to chromatin. When the researchers treated mice with JQ1, many of the abnormal activity levels of Brd4 target genes returned to normal.

Some aspects of mouse behavior improved, too. In an assay to measure repetitive behavior, researchers counted how many marbles mice buried in their bedding during a 15-minute window. Mice without FMRP buried marbles obsessively – roughly twice as many marbles as normal mice. But a week of JQ1 treatment reversed this unusual behavior.

Mice without FMRP exhibit abnormal social behaviors, too. Normal mice spend roughly equal time exploring another mouse and a plastic toy placed in their cage; mice lacking FMRP spend more time sniffing around the other mouse. After JQ1 treatment, the FMRP mice shifted their curiosity back toward the toy.

The results suggest that some aspects of fragile X syndrome might be improved by tweaking FMRP’s chromatin-shaping targets. This approach isn’t limited to fragile X syndrome, either, Darnell says. He points out that half of the children with the syndrome also show some features of autism. Many of the genes that were behaving differently in those with fragile X also seem to be abnormal in cases of autism too, the researchers found.

The link to autism suggests that a therapy that resets gene behavior in fragile X syndrome may also ease other developmental disorders. “There is a remarkable connection between fragile X syndrome and autism,” Darnell says. He and his colleagues intend to clarify how these various targets interact, and how they might be corrected when they veer off course.