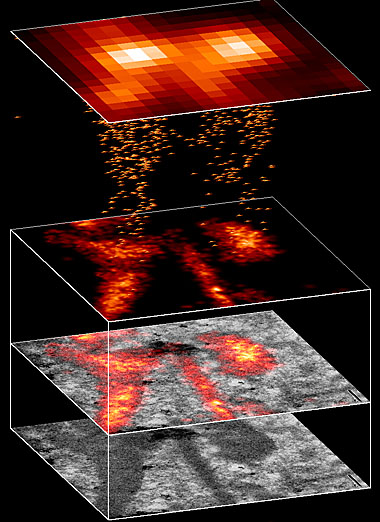 A new light microscope so powerful that it allows scientists peering inside cells to discern the precise location of nearly each individual protein they are studying has been developed and successfully demonstrated by scientists at the Howard Hughes Medical Institute's Janelia Research Campus in collaboration with researchers at the National Institutes of Health and Florida State University.

The new technique far surpasses the resolution of conventional optical microscopes, which are inherently limited by the wavelength of light. With these microscopes, objects separated by less than 200 nanometers cannot be distinguished from one another. While researchers can learn a lot by studying the arrangement of proteins inside cells at this resolution, it is insufficient to pinpoint the location of individual proteins – which are typically only one to two nanometers in diameter. The new approach, called photoactivated localization microscopy (PALM), brings scientists far closer to this goal – discriminating molecules that are only two to 25 nanometers apart.

The scientists published the details of the new technique in the August 10, 2006, edition of Science Express, an advance online publication of the journal Science.

The prototype for the new microscope was assembled in September 2005 in the living room of one of the inventors, Harald Hess, who will soon become director of the applied physics and instrumentation group at Janelia. Hess collaborated on the project with colleague Eric Betzig, who is now a group leader at Janelia. The assembly and underlying conceptual work on the microscope were personally funded with $25,000 each from Hess and Betzig.

When Betzig and Hess began to develop the concept, the two scientists were unemployed. Both were in the midst of contemplating their careers and how they could best impact the science world. They knew that there was a need for new technology to image cells with resolution greatly superior to what was currently available, and they hoped they had the skills to solve that problem.

Performance-wise, it’s just astounding. And simplicity-wise it’s astounding. It knocks the socks off of standard fluorescence microscopy from a resolution perspective.

Hess and Betzig had both thought a lot already about how to build a better microscope. In 1993, Betzig published a paper in Science showing that the position of fluorescent molecules under a near-field optical microscope can be identified with precision far greater than the wavelength of light was once thought to allow. And in 1994, in work that was also published in Science, Hess and Betzig showed together that the closely packed points light in a semiconductor could be individually isolated and studied. Combining these earlier studies, Betzig later proposed that molecular-level resolution might be achieved in cells by imaging just a few molecules at a time and identifying each one's center – but no one yet knew how to separate out a cell's densely packed proteins to make that possible under physiological conditions.

It was a tool developed in a biology lab that ultimately inspired the two physicists plan to build a better microscope. “In the world of biology there is a new generation of fluorescent proteins that you can switch on at will with a little bit of violet light,” Hess explained. He and Betzig learned of these molecules, which biologists can genetically link to cellular proteins that they wish to study, during conversations with Florida State University (FSU) scientist Michael Davidson in April 2005.

The two knew immediately that what they had heard about photoactivatable molecules fit perfectly with their previous work. In that earlier work, Hess said, “we developed something called spectroscopic near-field microscopy, where we spread out a spectrum of light across wavelengths into lots of little glowing things. And that technique allowed us to see the individual constituents of a generalized glow.” In fact, that “generalized glow” was much like what scientists see when they use a light microscope to look at fluorescently labeled proteins inside cells.

Molecular biology techniques allow researchers to attach a label to each copy of a protein they wish to study. Ordinary optical microscopes can detect these molecules, although Hess describes their appearance under the microscope as “little fuzzy round balls.” As Betzig's work in the early nineties had shown, pinpointing the center of these fuzzy balls can identify the location of the labeled protein to the nanometer scale. But if the molecules are too close together—and usually they are - the fuzzy edges appear to overlap and the microscope cannot discriminate between them. So a cluster of labeled molecules appears as a merged glow that cannot be decomposed into individual sources.

But when Hess and Betzig learned of the new fluorescent labels, developed by George Patterson in the lab of Jennifer Lippincott-Schwartz at the NIH's National Institute of Child Health and Human Development (NICHD), they realized that they could be the key. Their technology would enable the scientists to separate the glow of labeled proteins inside a cell into individual components, similar to what they had done in their previous work. Visualizing individual molecules would be as simple as limiting the amount of violet light they used to turn on the fluorescent probes, so that they turned on just a tiny percentage of the labeled molecules.

The concept struck them as so obvious, in fact, that they suspected other researchers might already be working to make it a reality. “At the time we thought, `This is so simple and the time is so ripe,'” recalled Betzig. “There are so many labs that could do this in a week, and we're starting with nothing.” But the two immediately got to work with what they did have – which turned out to be old optics equipment Hess had saved from their days at Bell Labs, supplemented by the money in their wallets. They dusted off the equipment and set up shop in the living room of Hess's condominium in La Jolla, California.

There, in just two months, they built a prototype of the instrument. They also understood, however, that the biology and sample preparation issues would loom just as large as the instrumentation ones. So they contacted Davidson at FSU and Lippincott-Schwartz and Patterson at NICHD. Soon, all three groups were in close cooperation to bring the concept to reality.

By October 2005, the prototype was ready for testing, thanks in part to equipment resources marshaled by the NICHD. Additional financial resources supplied by HHMI ensured that the work would be well funded in the future since Betzig, at almost the same time, accepted a position as a group leader at Janelia.

Betzig exemplified the type of venturesome, creative scientist sought by Janelia, but since the campus was still under construction, it could not yet provide the lab space and collaborative environment he and Hess needed. They therefore moved their prototype to a small space in Lippincott-Schwartz's lab at the NIH. While the cramped quarters and frequent hotel stays were challenging, Hess and Betzig said that being near their collaborators – who provided the biological expertise that they lacked – was invaluable as they developed the microscope.

The basic concepts behind their new technique are simple: The researchers label the molecules they want to study with a photoactivatable probe, and then expose those molecules to a small amount of violet light. The light activates fluorescence in a small percentage of molecules, and the microscope captures an image of those that are turned on until they bleach. The process is repeated approximately 10,000 times, with each repetition capturing the position of a different subset of molecules.

Because the number of molecules captured in each image is small, they are far enough apart to see each molecule individually and thereby localize its center, Hess said. When a final image is created that includes the center of each individual molecule, it has a resolution previously only achievable with an electron microscope. Unlike electron microscopy, however, the new technique allows for more flexibility in labeling molecules of interest.

By early 2006, the collaborators were taking strikingly clear images of a number of cellular structures, including actin filaments, focal adhesion proteins, mitochondria, and the Golgi apparatus. “Performance-wise, it's just astounding. And simplicity-wise it's astounding,” Betzig said. “It knocks the socks off of standard fluorescence microscopy from a resolution perspective.”

Lippincott-Schwartz pointed out that although there are advantages to both imaging techniques, the use of PALM in conjunction electron microscopy is particularly powerful. “A great feature of PALM is that is can readily be used with electron microscopy, which produces a detailed image of very small structures - but not proteins - in cells,” she said. “By correlating a PALM image showing protein distribution with an electron microscope image showing cell structure of the same sample, it becomes possible to understand how molecules are individually distributed in a cellular structure at the molecular scale. Correlative PALM unites the advantages of light and electron microscopy, producing a revolutionary new approach for looking at the cell in molecular detail.”

For now, Hess and Betzig have focused on creating PALM images with a single fluorescent protein, which limits them to mapping a single target protein per sample. “Right now the resolution is wonderful, but it's all single-label stuff. Knowing where one protein is located is nice,” Betzig said, “but what you really want to know is where multiple proteins are in relation to one another.” The researchers are now exploring the use of additional labeling molecules, to ultimately enable scientists to get a molecular level view of how proteins interact with one another inside cells.

These are the interactions that drive cellular activity, and watching them in action will be important to understanding the interface between molecular and cellular biology. “As the PALM technology advances, it may prove to be a key factor in unlocking at the molecular level secrets of intracellular dynamics that are unattainable by other methods,” observed Davidson, who directs the optical microscopy division at FSU.

The researchers also acknowledge that the time needed to collect the thousands of single molecule images that go into each PALM picture is cumbersome. With the camera snapping one to two pictures each second, it can take two to 12 hours to image a single sample. Activating more molecules per frame would reduce the number images that must be collected, and making the molecules brighter would reduce the time needed to take each image. Either would help to speed the PALM process - a high priority for the Hess and Betzig as they continue to refine the technique.

The two inventors are eager to continue developing their technique into something that is practical for use by biologists – a process that they anticipate will be easier when they move to the Janelia Research Campus in the coming months. “I think we've come a long way in the last year, from two unemployed guys with just an idea to having good jobs and a good set of data,” Betzig noted. “Now if we can begin to refine this technique, we should really be able to take it to a lot of new applications.”