Janelia researchers create a new microscope that uses a thin sheet of light to reveal the dynamic inner life of cells.

A new microscope invented by scientists at Howard Hughes Medical Institute’s Janelia Farm Research Campus will let researchers use an exquisitely thin sheet of light—similar to that used in supermarket bar-code scanners—to peer inside single living cells, revealing the three-dimensional shapes of cellular landmarks in unprecedented detail. The microscopy technique images at high speed, so researchers can create dazzling movies that make biological processes, such as cell division, come alive. 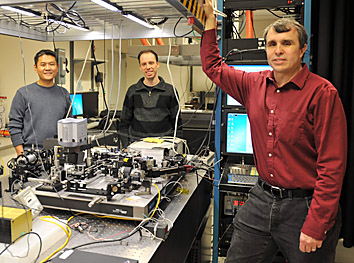 The technique, called Bessel beam plane illumination microscopy, is described in a research article published online on March 4, 2011, in the journal Nature Methods.

A major goal of biologists is to understand the rules that control molecular processes inside a cell. If one is trying to learn the rules of a game, it is better to have a movie of people playing the game than it is to have still photos—and the same is true for cells, says Janelia Farm group leader Eric Betzig. He has been inventing and improving microscopes for more than 30 years. Despite having seen huge advances in microscopy during that time, Betzig says the field is still hindered by the fact that many microscopy techniques require that cells be killed and fixed in position for imaging. There is only so much one can learn from studying dead cells—the equivalent of still photos, he says.

There's no other technique that comes close to imaging as long with such high spatial and temporal detail.

Betzig wanted to create a microscope that would let researchers see the dynamic inner lives of living cells. The notion of studying live cells, stippled with fluorescently labeled proteins and other molecules, is not new. But live-cell techniques can be problematic because light produced by microscopes can damage the cell over time. Besides cell damage, light causes the fluorescent molecules—of which there are only so many—to wink out over time. In other words, the longer you study the cell to uncover its properties, the more damage you do to the cell and the more likely you are to spend your "photon budget," Betzig says.

What's more, the light of a microscope exposes more of the sample than just the small portion that is in focus. Illuminating the out-of-focus regions produces blur, making small intracellular features appear as lengthened blobs rather than sharp dots. "The question was, is there a way of minimizing the amount of damage you're doing so that you can then study cells in a physiological manner while also studying them at high spatial and temporal resolution for a long time?" Betzig says.

Long before arriving at Janelia Farm in 2006, Betzig began thinking about ways to improve live-cell microscopy. He put those thoughts on hold while he focused on designing new microscopy techniques that would ultimately shatter the limits of spatial resolution (imposed by the laws of diffraction). Until recently, microscopes could see objects no smaller than 200 nanometers in size. Several years ago, Betzig and his Janelia Farm colleague Harald Hess invented photoactivated localization microscopy, PALM, which can produce images of objects only 10-20 nanometers in size.

PALM and most other microscopes—even the ones college students use in their biology classes—work by exposing the sample through one objective lens and then collecting the light that comes back through that same lens. That approach causes light to damage the sample and induces blur, making it difficult to observe live cells.

In 2008, Betzig began working on ways to overcome these challenges. One idea he had was to use plane illumination microscopy. First proposed about 100 years ago, plane illumination involves shining a sheet of light through the side of the sample rather than the top. To do that, microscopists use two different objective lenses that are perpendicular to one another. "Because you come from the side, plane illumination confines the excitation much closer to the part that's in focus," Betzig says.

Although other researchers, including Janelia Farm Fellow Philipp Keller, have used plane illumination to great effect to study multicellular organisms hundreds of microns in size, the light sheets were still too thick to work effectively for imaging within single cells only tens of microns in size. The main problem is that the wide swath of light used in plane illumination exposed more of the cell than Betzig's group wanted. This caused excessive blur and light toxicity. To circumvent this problem, his group used a Bessel beam, a special type of non-diffracting light beam studied by physicists in the late 1980s, and used today in applications including bar-code scanners in supermarkets. Sweeping the beam across the sample creates a thinner light sheet, his group found.

Bessel beams behave a bit strangely, though, and this is what has kept Betzig's postdoctoral researchers—Thomas Planchon and Liang Gao—busy over the past few years. Although they produce a very narrow light beam, Bessel beams also create somewhat weaker light that flanks the focal point, making the pattern of illumination look like a bull's eye. The extra light lobes are a hindrance because they excite too much of the sample. To compensate for this problem, Betzig's group used two tricks. The first is a concept called structured illumination, where instead of sweeping the beam continuously, they turned it on and off rapidly, like firing a machine gun. This creates a periodic grating of excitation that can be used to eliminate any out-of-focus blur. (Structured illumination, used by Janelia Farm Group Leader Mats Gustafsson, is also one way of achieving super-resolution.)

Another strategy Betzig's group used is two-photon microscopy, a method commonly used in neuroscience to visualize thick pieces of brain tissue. One of the advantages of two-photon microscopes is that very little fluorescence signal is generated from weakly exposed regions. Thus, when they applied two-photon methods, the background from the Bessel side lobes was eliminated, and all that remained was the light from the narrow central part of the Bessel beam.

They then set out to image as fast as possible. The Bessel beam sweeps quickly through the sample, allowing the group to take nearly 200 images/second and build three-dimensional stacks from hundreds of two-dimensional images in one to 10 seconds. As they had hoped, they found that they could take hundreds of such three-dimensional image sets without harming the cell, generating amazing movies of cellular processes such as mitosis, where chromosomes divide as one cell becomes two. "There's no other technique that comes close to imaging as long with such high spatial and temporal detail," Betzig says.

Last summer, as soon as they got their first live cell images, Betzig, Planchon and Gao packed up the new instrument in a rented sport utility vehicle and took it to the Woods Hole Marine Biological Laboratory in Massachusetts for the neurobiology course, where they worked with co-authors Jim and Cathy Galbraith from the National Institutes of Health. "We learned a lot about what works and what doesn't and ways to treat the cells in a way that maintains their physiological state while we're doing the imaging," he says. "Like every microscope, the instrumentation is only part of the puzzle. A lot of it is finding the right samples, and right preparation methods to make it work."