With the development of an adaptive, multi-view light sheet microscope and a suite of computational tools, researchers have captured the first view of early organ development inside the mouse embryo.

A smart new microscope has given scientists a front-row seat to the drama of mammalian development.

For the first time, researchers can now peek inside a living mouse embryo and watch the gut begin to form and heart cells take their first tentative beats. Over a critical 48-hour window – when rudimentary organs begin to take shape – scientists can follow every embryonic cell and pinpoint where it went, what genes it turned on, and what cells it met along the way.

The new work is “literally a cellular-resolution building plan of the entire mouse,” says Philipp Keller, a physicist and biologist at the Howard Hughes Medical Institute’s Janelia Research Campus in Ashburn, Virginia. He and his colleagues report the results October 11, 2018, in the journal Cell. And they’re making the microscope and computational tools, built at Janelia, and all the imaging data free and publicly available.

Such resources are critical for scientists trying to grow or regenerate organs, or to one day fix developmental problems that arise in the womb, says Kate McDole, a Janelia developmental biologist and study coauthor. “To do any of that, you first need to understand how organs form,” she says. “You need to actually see what happens in a real embryo.”

Until now, the best views of living embryos came from fish and flies. A decade ago, Keller and colleagues developed the first “digital embryo” of the zebrafish, a kind of see-through, striped minnow often studied by scientists.

The researchers scanned fish embryos with a light sheet microscope, which shines ultrathin sheets of laser light through samples, section by incremental section. Keller designed computer programs to make sense of all the imaging data, and the result offered a high-resolution glimpse into the first 24 hours of fish development.

Keller and Janelia colleagues followed the work with a digital fruit fly embryo reported in the journal Nature Methods in 2014. Those animals are relatively simple to image, Keller says – especially zebrafish. They’re transparent and not very sensitive to light, making them an “easy target for microscopy.”

Mice are a different story. Keeping mouse embryos alive in the lab – for even short periods of time – requires a laundry list of conditions. Embryos must be kept sterile, for one; they need to be submerged in a kind of nutrient soup; and gas and temperature levels must be precisely controlled. What’s more, the cells are incredibly sensitive to light, tissues can be dense and opaque, and the embryo can’t be held still under the microscope. Rather, it’s anchored at just one point, so it “drifts around like a little balloon,” McDole says.

Finally, during the time period the researchers wanted to observe, from six and a half to eight and a half days after fertilization, the embryo grows by more than an order of magnitude – to almost three millimeters in diameter, about the length of a sesame seed. For the microscope, the embryo is a moving target, continually changing size and position. Even a human camped out in the lab, adjusting the scope’s focus every five minutes for two days, couldn’t capture crisp images of the entire embryo, Keller says.

So his team took a different tack – they designed a microscope that could do all the work itself.

At the center of the Janelia researchers’ microscope, a clear, acrylic cube houses the embryo imaging chamber. Two light sheets illuminate the embryo, and two cameras record images. Those components let researchers spy the once-unseen world of early organ development, revealing dynamic events in high-resolution detail no one has seen before.

When the foregut forms, the team could see that “it’s not this slow gentle process,” McDole says. “The whole thing just caves in and makes a huge hole.” And the neural tube, the structure that later forms the brain and spinal cord, knits together like a zipper, stretching across the embryo.

During a critical 48-hour window of mouse development, the neural tube starts to fold and pinch together. The part of the tube at left will go on to form the brain, and at right, the spinal cord. Credit: K. McDole et al./Cell 2018

The microscope’s brain is equipped with a suite of algorithms that track the embryo’s position and size. These algorithms map how the light sheet moves through the sample and then figure out how to get the best-looking images – keeping the embryo focused and centered in the field of view.

Because the embryo is constantly changing, the microscope must constantly adapt, making decisions in milliseconds, over hundreds of images, at hundreds of different time points. “I wouldn’t say our microscope is smarter than a human,” Keller says, “but it’s capable of doing things that a human operator would not be able to do.”

For each embryo examined, the researchers collected nearly a million images. Then, they built a computational toolkit to piece together a picture of each embryonic cell’s developmental arc. A first step was to follow every cell over 48 hours of imaging data. That relied on an improved cell-tracking program the team had initially developed for fly and zebrafish embryos. Combined with a program the team created called statistical vector flow, the researchers could work backward to figure out where each cell in the eight-and-a-half-day-old embryo came from, says study coauthor Léo Guignard, a computer scientist at Janelia. It’s like drawing a map of each cell’s fate and history, he says.

Without those programs, it would have taken a human two to three years to keep track of every cell, Keller says.

An array of other tools let the team flesh out the intricacies of gastrulation, when an embryo transforms into a multi-layered structure, and early organogenesis. Janelia collaborators Andrew Berger, Srinivas Turaga, and Kristin Branson built a cell division detector that automatically logs which cell divided (and where and when). And Guignard developed a program to create a virtual “average” mouse embryo, by aligning four embryos together in space and time. (Doctor Who fans will recognize the program’s name, TARDIS, a nod to the time and space machine used by the fictional doctor.)

The new microscope is the sixth one Keller’s team has developed in his eight years at Janelia; each comes with new and improved software tools. In many cases, Keller says, the scopes “enable fundamentally new types of imaging experiments” – such as watching whole mouse embryos develop.

Their latest work touches on a fundamental question in biology, Keller says: “How do you go from a single cell to an embryo?” 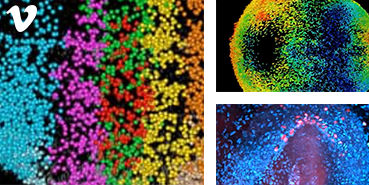