A new imaging method will allow researchers to study speedy cell processes over hours and days rather than seconds, and to examine how morphological defects arise in developing animals. 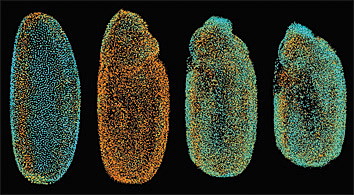 The transformation of a single cell into a complete animal is amazing and complicated. Cells must divide and migrate through the ever-changing embryo, shaping themselves into specialized organs. And it happens at a blistering pace: a zebrafish embryo, for example, goes from a single cell to 20,000 within the first 24 hours of life, as its basic body axis forms. And scientists are now able to marvel at this process in developing fish and flies with unprecedented spatial and temporal resolution.

A new imaging method, which combines two established microscopy techniques, will allow researchers to study speedy cell processes over hours and days rather than seconds, and to examine how morphological defects arise in developing animals. The technology is described in a July 4, 2010, online publication of the journal Nature Methods. Philipp Keller, now a fellow at the Howard Hughes Medical Institute’s Janelia Farm Research Campus, collaborated on the work with scientists at the European Molecular Biology Laboratory (EMBL), the University of Heidelberg, and the Sloan Kettering Cancer Institute. Ernst Stelzer of EMBL is the senior author on the publication.

Until two years ago, biologists who wanted to see the development of an entire embryo were simply out of luck. Available instruments such as confocal microscopes, which scan a biological sample using a single spot of laser light, were too slow to illuminate early development. The piercing light from these machines also burns out the fluorescent markers used to label a sample, and damages the specimen before one has the chance to observe it over time.

It is really amazing to have a tool that captures the development of an entire animal with single-cell resolution.

Developmental biologists have had to design experiments to overcome these limitations. For example, they zoom in on a specific organ at a defined point in time. Or, to capture the progression of development in simple species like worms, they’ll take photos of multiple embryos that are each in different stages and stitch together those images. But for flies or even vertebrates such as zebrafish, aspects of development are unpredictable in each individual. “You can't really do the stitching experiment because you are putting together data that aren't really compatible. Essentially, the only solution is to record cell behavior simultaneously in the entire animal,” says Keller, who joined the Janelia Farm Research Campus in 2010.

A new imaging method will allow researchers to study speedy cell processes over hours and days rather than seconds, and to examine how morphological defects arise in developing animals.

In 2008, Keller and his colleagues at the European Molecular Biology Laboratory in Heidelberg, Germany, designed and built a new type of microscope that they used to track a zebrafish embryo as it grows from a single cell to 20,000. Called ‘digital scanned laser light sheet fluorescence microscopy’ (DSLM), the three-dimensional imaging method, reported in the November 14, 2008 issue of Science, works by illuminating a thin sheet of the sample while a detector records the part of the sample being lit up. “This works really well if you have a relatively transparent specimen,” Keller says. “The light goes to the part of the specimen that you want it to go to, and it doesn’t change its properties while it’s doing that.”

Using more than 300,000 images from a single day of development, Keller and his colleagues created a model of development that they called the Digital Zebrafish Embryo. Movies of the development and model are available at www.digital-embryo.org.

Compared to confocal microscopy, DSLM is faster and gentler on the sample. But researchers who used the technique to look at zebrafish embryos beyond the first day of development or at fruit fly embryos, which are much less transparent than zebrafish, found the images blurry. Keller says that’s partly because as more cells appear in the growing embryo, fluorescent light emitted by the sample gets scattered on its way to the microscope’s detector. The light deflects in unpredictable ways.

To correct the blurry images, Keller and his colleagues added an imaging strategy called structured illumination to the DSLM. They used a structured illumination microscopy technique invented by Tony Wilson's lab at the University of Oxford, which works by illuminating a sample with stripes of light rather than a homogenous sheet. By modulating the intensity of the laser in the microscope, Keller could shine the striped pattern on a single plane. The striped illumination pattern shows up as blurry stripes on the detector. But using simple math and three different phases of the striped pattern in a single plane, the scientists could subtract out the blurriness of the image.

Using the new set-up, Keller’s team captured zebrafish development for 58 hours, generating a microscopy data set that comprises one million high-resolution images, as well as early development of a fly embryo. Reconstructing cell positions in the live fly recording by automated computer algorithms allowed the scientist to create a Digital Fly Embryo. It will be easy to implement the technique in other developing animals, he says, because the striped patterns can be adjusted during the experiments to get the maximum amount of information from the changing embryo.

Keller says that the technology will be commercially available soon, making it possible to get a systems-level understanding of how cells are behaving and interacting with each other and forming the various different tissues and organs in an organism. Multiple levels of molecular biology, such as genes and proteins, can be examined in real time in the context of the entire developing embryo.

The time-lapse images of development are already giving scientists and educators a sense of development that cannot be put into words or static images. For Keller, watching the mini-movies for the first time has been the most exciting part. “It is really amazing to have a tool that captures the development of an entire animal with single-cell resolution,” he says. “This finally allows us to study, and hopefully eventually understand, this complex biological system on a truly quantitative level.”