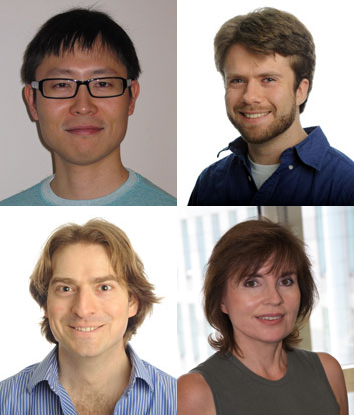 The four neuroscientists are intent on addressing major questions in neuroscience. They want to understand how neural circuits are organized, how circuits change as an animal learns, and how they modify behavior in response to a changing environment. The collaborative and interdisciplinary community of researchers at Janelia will accelerate their pursuit of those goals, they say.

“To do neuroscience, you need to do genetics, biochemistry, physiology, high-resolution imaging, and single-molecule work,” says Keleman, who is currently a staff scientist at the Research Institute of Molecular Pathology in Vienna, Austria, where she studies learning in fruit flies, focusing on courtship behavior. “At Janelia, experts in those fields are all in one place, and it’s so easy to talk to them.”

The new lab heads will arrive at Janelia with research tools ranging from computer models to tiny, translucent zebrafish. Like all Janelia scientists, they will actively engage in research. The absence of teaching, fundraising, and administrative responsibilities allows Janelia lab heads to devote their energy and creativity to their research.

“Staying close to the bench and looking at data are sources of inspiration for me,” says Koyama, who will come to Janelia in September following a postdoctoral fellowship at Cornell University. Koyama uses zebrafish to study how a neuron’s function is influenced by the time and place in which it develops. At Janelia, he will focus on neurons that contribute to adaptive behaviors, such as adjusting swim speed or direction in response to a changing current. Adaptive behaviors begin to occur when a zebrafish is five days old and improve as the nervous system develops further.

The four scientists have all spent time at the research campus as visitors, lab members, or participants in Janelia’s scientific conferences, and say its intellectually stimulating atmosphere compelled them to return as resident scientists. “Collaborations are very easy here. It’s quite intense, and things move quickly,” says Ahrens, who returned to Janelia as a lab head in November, more than three years after spending time on the campus as a visiting scientist, developing tools to monitor neuronal activity in fruit flies. Like Koyama, Ahrens has now turned to the zebrafish for his studies of the brain. Its small size and transparent body allow Ahrens to monitor activity in the complete brain as the fish swims through a virtual reality system that Ahrens designed as a postdoctoral researcher at Harvard University.

Druckmann, a theoretical neuroscientist, did postdoctoral research in the lab of Janelia scientist Dmitri Chklovskii, and says he has found the campus full of colleagues with curiosity and the time to discuss their ideas. Druckmann says interaction with experimental neuroscientists is essential for developing and testing his models of the brain’s structure and dynamics. “The experimental scientists here are very conscious that theory is useful, and they’re open and want to talk,” he says.

Ahrens and Druckmann already have labs up and running at Janelia, and are recruiting for additional lab members. Koyama and Keleman will arrive in the fall.

Janelia lab heads are selected through open competitions that put strong emphasis on vision and excellence in research. Scientists from a wide variety of disciplines who are passionate in their pursuit of important problems in basic scientific and technical research are invited to apply. The next lab head competition will open in the fall.

Misha Ahrens wants to understand how neural circuits enable animals to change their behavior in response to changing conditions. To find out, he is analyzing activity in the brains of zebrafish as they navigate through a virtual environment created by a “swim simulator” that he developed. A changing display provides the fish with visual feedback that simulates movement, and Ahrens monitors activity in the brain as a fish adjusts its behavior based on the sensory information it receives. Because of the small size (just 100,000 neurons compared to the human brain’s 100 billion) and transparent nature of the zebrafish brain, neurons are more accessible for imaging, manipulating, and monitoring than they are in more complex organisms. During the first 10 days of development, Ahrens can image the entire brain at once while monitoring the activity of individual cells. He has found that zebrafish are able to perform short-term learning in their virtual environment, and is now investigating how continuous learning and adaptation is implemented through neural circuits in the brain.

Ahrens has a Ph.D. in computational neuroscience from University College London. He did postdoctoral research in Florian Engert’s lab at Harvard University, as well as during four months as a visiting scientist in Vivek Jayaraman’s lab at Janelia. He became a lab head in November, 2012.

Shaul Druckmann is using theoretical neuroscience to model how the large, complex, and frequently overlapping neural circuits in the brain are organized. The interconnected pathways in the brain superficially resemble other complex networks, such as food chains or the internet, and it is still unclear why the brain can accomplish many things that we don’t normally think of other networks as doing, he says. One unusual aspect of neural circuit organization is that often rather than a single neuron being assigned to process a particular input in the brain, a large number of neurons can receive a single input, and those neurons are strongly connected to one another. “There are many more neurons than you’d naively think there should be,” Druckmann says. “It’s very different from how we would build a machine. Our intuition is terrible at figuring out how networks organized in this way function.” Druckmann wants to understand what advantages the logic behind the brain’s complexity. He uses theoretical tools to address this question, drawing on insights from fields including physics, engineering, computer science, genomics, and mathematics.

Druckmann has a Ph.D. in neural computation from the Hebrew University in Jerusalem. He did postdoctoral research investigating the relationships between structure, function, and dynamics in neural circuits in Dmitri Chklovskii’s lab at Janelia, and became a lab head in January, 2013

Krystyna Keleman is studying fruit fly courtship behavior to learn how sensory information is processed in the brain to generate behavior, and how information processing and ultimately the behavior are changed by learning. After mating, female fruit flies reject subsequent mating attempts by male flies – a lesson that most male flies remember for a long time. After rejection by a mated female fly, males learn to avoid this type of female and preferentially court virgins. Keleman is identifying the neural circuits and molecular mechanisms male flies use to discriminate between virgin and mated females and, following the first encounter with a mated female, adjust their behavior during future encounters. “Our goal is to identify specific molecular mechanisms in the specific neurons required for this type of learning, but we’ll see what we stumble on at Janelia. We’re hoping we can take it further than we can even imagine at this point.”

Keleman is currently a staff scientist at the Research Institute of Molecular Pathology (IMP) in Vienna, Austria, where she has been since 1998. She has a Ph.D. in developmental neurobiology from the University of Zurich in Switzerland, and did postdoctoral research in Barry Dickson’s lab at the IMP before setting up her own lab there in 2007. She will arrive at Janelia in October, 2013.

Minoru Koyama is investigating how the development of the nervous system affects its functional organization. By tracking the development of neurons in the brain and spinal cord that are involved in escape and other simple, reflexive behaviors, he discovered that a neuron’s function is influenced by when and where it is born. Now he is examining this relationship in neural circuits involved in the increasingly complex behaviors that emerge as the zebrafish brain develops after hatching. These circuits span several regions of the brain, and the behaviors they control improve as the brain continues to develop. He hopes to understand not only how complex circuits work, but also whether there are simple rules that govern the construction and functional organization of the brain.

Koyama has a Ph.D. in neurophysiology from the University of Tokyo. He did postdoctoral research in the lab of Joseph Fetcho at Cornell University, and will arrive at Janelia in September, 2013.