With a new picture of a bacterial enzyme in hand, Howard Hughes Medical Institute scientists are now on their way to making “chemical factories” that will help laboratory animals produce their own resveratrol -- the compound behind red wine's frequently touted health benefits.

In designing the chemical factories, which are known as synthetic metabolic pathways, the scientists are taking their cues from plants that produce resveratrol and from bacteria that produce the chemical building blocks of resveratrol. This approach will allow them to pursue a fresh strategy for teasing out how resveratrol acts in living organisms to improve health and prevent disease. The research article describing their approach was published in the journal Chemistry and Biology on December 22, 2006.

Although there are clear health benefits in laboratory animals whose diets are supplemented with resveratrol, there are many unanswered questions about how those benefits accrue at the molecular, cellular and tissue levels.

More than a decade ago, scientists proposed that red wine and resveratrol might help explain the low rates of heart disease in the French population despite their consumption of a diet high in fat. “There's something unusual about the French diet,” said Joseph P. Noel, a Howard Hughes Medical Institute investigator who led the study published in Chemistry and Biology. “The French generally smoke more than Americans do and eat very fatty foods, but if you assess their cardiovascular health and incidence of cancer -- they have healthy hearts and lower overall rates of cancer than Americans. What is it about the French diet that may contribute to these observations?”

Accumulating evidence suggests that resveratrol -- which grapes (as well as some other plants) produce to ward off fungal infections -- is part of the answer. Studies of several organisms, including yeast, fruit flies, nematodes and a short-lived species of fish called nothobranchius, have demonstrated that resveratrol positively affects the well being of these simple creatures.

“Supplementation with resveratrol reproducibly extends the mean lifespan of these model organisms,” Noel noted. In one recent high profile study, mice that were fed a high-fat diet that also included resveratrol did not suffer from the negative effects of obesity, and instead exhibited characteristics of mice maintained on a low-calorie diet. Another recent study showed that mice fed high doses of resveratrol showed significant improvement in metabolism and muscle development.

“Although there are clear health benefits in laboratory animals whose diets are supplemented with resveratrol, there are many unanswered questions about how those benefits accrue at the molecular, cellular and tissue levels,” said Noel, whose lab is at the Salk Institute for Biological Studies. “While you see these really fascinating and beneficial results - prolonged life span, protection against cancer, and lower rates of cardiovascular disease - what we would really like to know is why that happens, in a very specific way.”

Achieving this level of understanding in whole animals can be difficult to discern when compounds such as resveratrol are provided as part of an animal's diet. First, animals in such studies are usually given very high doses of resveratrol. Then the animals' own metabolism alters the compound considerably, as it moves through the digestive tract and is then dispersed to various parts of the body. Sometimes this results in the breakdown and elimination of resveratrol, said Noel. Furthermore, when an animal is fed resveratrol, there is no way to control which parts of the body the compound reaches. 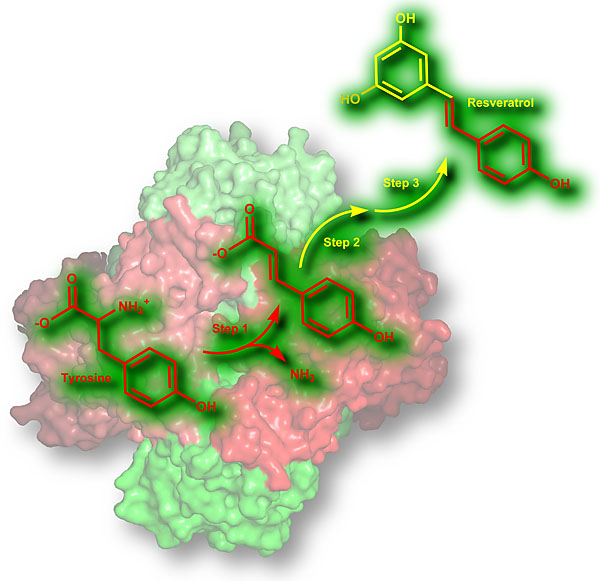 “There have been extensive reports in the scientific literature over the past decade or more that suggest that resveratrol hits multiple targets in an organism's tissues and organs,” Noel said. “So when you're feeding it to an animal, it's really hard to understand at a molecular level what is actually happening. What we really would like is a new way of delivering resveratrol to a specific tissue at a specific time in the organism's development. That is where our work over the years on understanding how organisms produce these natural chemicals comes in. We can control things genetically to ensure the chemical factory for making resveratrol is only built at a specific time in the part of the animal we want to investigate.”

For more than a decade, Noel's lab has been probing the metabolic pathways that organisms like plants and microbes use to produce resveratrol and evolutionarily similar natural chemicals. In 2004, they published the structure of the final enzyme in the biosynthetic process that plants employ to make this antifungal agent. In grapes and other plants, four separate enzymes are needed to convert the common amino acid phenylalanine into resveratrol. Each enzyme performs a distinct role in the transformation, adding, removing, or swapping specific chemical groups. However, one of these steps is terribly hard to control, Noel said, making it nearly impossible to build a factory from only plant enzymes.

The Noel team's detailed understanding of the enzymes that manufacture resveratrol, supplemented by their knowledge of the three-dimensional architecture of resveratrol's enzymatic factories, are providing clues to an alternative strategy for studying the compound's effects on health. He and his colleagues are working to create what he calls a synthetic metabolic pathway - a chemical factory that contains all the components necessary for resveratrol production, which can be genetically introduced into an organism so that it produces the compound in its own cells. To enable the design and deployment of the most useful metabolic factory, Noel said, resveratrol production should begin with a molecule present naturally in the animal's diet.

One way to do this would be to create animals that carry separate genes encoding enzymes capable of making resveratrol. “That's doable,” Noel says, “but it's not easy.” Introducing the genes in such a way would mean researchers would have to find a means of ensuring that each gene was activated at the same time and place and produced the appropriate amount of each enzyme.

“One simple way of getting around this,” he said, “is to fuse all the genes together in the order that best accommodates their individual three-dimensional structures.” When the cell turns that fused gene on, the enzymes will be assembled into a single chemical factory with all the tools necessary to produce resveratrol. “If you're going to do that, you really need to know what the atomic-level structures of those components are,” Noel explained. “If you put them together in the wrong order, you can interfere with their architecture or ability to efficiently produce resveratrol.”

Noel and his colleagues have understood the architecture and function of the final enzyme in the pathway for several years, and they recently deciphered the structure for a second enzyme. But building a synthetic protein that incorporated the enzyme plants use to catalyze the first step in the resveratrol pathway - which acts on the amino acid phenylalanine - was a tricky problem. Even after phenylalanine is converted to a product, that chemical commodity still has to be transformed by another enzyme that places a chemical group, called a hydroxyl moiety, on it. According to Noel, the fact that this second enzyme usually is embedded in the membrane of a cell was a significant obstacle limiting the utility of an engineered system in animals.

Fortunately, a few species of bacteria evolved a more streamlined method of creating the necessary resveratrol starting material from natural amino acids. Rather than making it from phenylalanine in four steps, some bacteria have an enzyme that begins with tyrosine, another common amino acid. This bypasses the problematic membrane-imbedded plant enzyme and instead uses just three steps to convert tyrosine into resveratrol, Noel said. This first enzyme is related to the enzyme plants have that uses phenylalanine and to another enzyme all organisms have that uses histidine.

The enzymes that act on phenylalanine, tyrosine and histidine in the three pathways are related - all belonging to a family of proteins known as ammonia lyases. Until Noel's study, however, no one had solved the structure of an ammonia lyase that acted on tyrosine specifically. “What we wanted to know,” Noel said, “was what does the architecture of that protein look like and how did evolution create specificities for each of the three distinct amino acids? These questions are important for engineering.”

Working with colleagues at the Salk Institute, including Gordon V. Louie, lead author of the Chemistry and Biology article, as well as collaborators at the Scripps Institution of Oceanography (University of California, San Diego), the researchers grew crystals of the bacterial tyrosine ammonia lyase. Louie used x-ray crystallography to visualize the shape of the molecule, both alone and when it was interacting with its product. When they analyzed the resulting structures, they saw that the enzyme was composed of four repeating units. They were also able to see exactly how the bacterial enzyme recognizes and binds to tyrosine. They pinpointed the enzyme's preference for tyrosine to a single amino acid, and found that by changing just that amino acid, they could shift the enzyme's specificity so that it acted on phenylalanine as the plant system does.

“With the structures of all three enzymes in hand, we can now put this enzymatic jigsaw puzzle together in an appropriate way,” Noel said. The tyrosine ammonia lyase, with its bulky, four-component structure, fits in the center of the chemical factory that he and his colleagues have designed. The two other enzymes, both simpler in structure, are linked to the outside of this core.

The scientists have encoded the instructions for building this protein on a single gene, and are beginning work to engineer laboratory animals that have the gene turned on in specific tissues. Noel's team is working closely with several colleagues at the Salk Institute to develop animal models for investigating a number of resveratrol's suspected effects.

These projects, already underway, are only the beginning of what Noel has planned. Also on the list are animals that produce resveratrol in the liver and special cells in the pancreas that produce insulin. Noel said that by tweaking the ammonia lyase enzyme and other enzymes in the chemical factory in small, targeted ways, his team should be able to genetically engineer animals to produce modified versions of resveratrol. This would give the scientists the opportunity to investigate how a slightly different chemical structure might alter resveratrol's effects in different tissues.

His group also understands how so-called tailoring enzymes decorate the resveratrol molecule with additional chemical groups in much the same way that a medicinal chemist in a pharmaceutical company decorates lead compounds for drug development. This knowledge could allow the scientists to continue to evolve resveratrol and similar molecules wholly in the organisms destined to be treated with natural chemicals.