Luke Lavis to Deliver Next Public Talk at Janelia

On February 18, Janelia group leader Luke Lavis will speak about “The Chemistry of Color” at 7:00 p.m. at Janelia Research Campus. 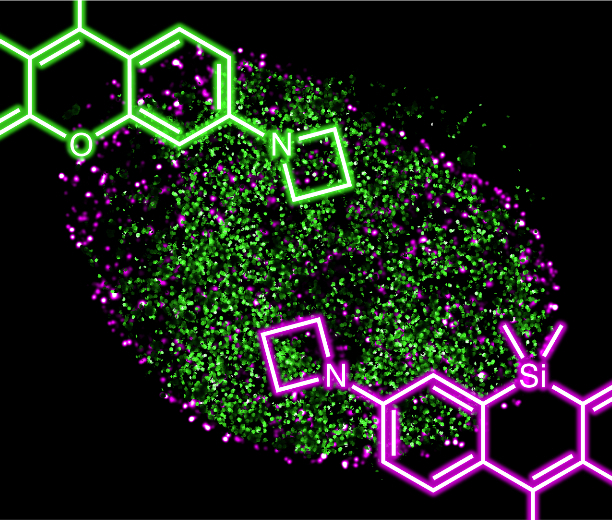 Janelia group leader Luke Lavis will deliver the next lecture in the Dialogues of Discovery series at Janelia Research Campus in Ashburn, Virginia. Lavis’ talk, “The Chemistry of Color,” is on Wednesday, February 18 at 7:00 p.m. Tickets are available at https://chemistryofcolor.eventbrite.com.

All Dialogues of Discovery lectures are free and open to the public, but tickets are required for admission, and seating is limited to 250 people. See www.janelia.org/events for more information, to sign up to receive email notifications about upcoming lectures, and to watch past lectures.

Synthetic colors are everywhere: in our homes, clothing, and food. Synthetic dyes were first discovered in the 19th century and laid the foundation for the modern chemical industry. In this lecture, Lavis will discuss how scientists are revisiting the chemistry of color to transform old dyes into new imaging agents to illuminate complex biological systems.

Lavis has been designing and fabricating dyes since he graduated with a degree in chemistry from Oregon State University in 2000. As an undergraduate, he worked in a natural products chemistry lab, recreating complex organic molecules from tree sap and red wine.

Uncertain about whether to pursue a research career or go to medical school, he took a break after graduation by going to work for Molecular Probes, a chemical maker based in Eugene, Oregon. Now a part of Fisher Scientific, Molecular Probes was, at that time, focused on making fluorescent dyes. While he was there, Lavis got a chance to make molecules with real-world uses.

He moved to work at Molecular Devices in Sunnyvale, California and again worked on fluorescent dyes, creating drug discovery kits that scientists could use to measure such things as ion concentration in cells and voltage differences across cell membranes. There, he decided that research, not medicine, was the path for him. He joined a chemistry/biochemistry group at the University of Wisconsin in Madison as a PhD student.

In graduate school, Lavis worked in the lab of Ronald Raines, doing basic research on an enzyme called ribonuclease A. Variants of RNase A can selectively kill cancer cells, and Raines's group was trying to figure out how this process worked.  He developed a fluorescent dye that could be attached to ribonuclease A variants, but which remained dark outside the cell. When the protein-dye pair entered the cell, natural cellular enzymes called esterases automatically snipped a bit of the dye off and made the molecule fluoresce.

At Janelia, Lavis’s efforts to modernize dye chemistry has resulted in the discovery of bright fluorophores that can label proteins inside living cells. The synthesis of these dyes uses a modern chemical reaction that is employed heavily in the pharmaceutical industry. Working with Eric Betzig, Robert Tjian, and James Liu at Janelia, these dyes have enabled the tracking of individual protein molecules inside living cells, which provides new insights into how the transcription of DNA is regulated. These “Janelia Fluor” dyes are also being used in labs around the world for sophisticated imaging applications.

Lavis has also developed new chemistry to synthesize new fluorescent tags for the Nobel Prize-winning photoactivated localization microscopy (PALM) developed at Janelia by Betzig and Harald Hess. PALM obtains superresolution images by shining low levels of a specific frequency of light to activate special dyes. Chemistry developed in Lavis’s lab has enabled the synthesis of a palette of photoactivated fluorophores with absorption maxima that span from the blue to the red. These dyes can complement other photoactivated dyes such as fluorescent proteins, enabling multicolor imaging experiments with high resolution.

Lavis's third project focuses on improving the ability of small molecules to operate in living tissue. Small molecules are important tools to measure and modulate cellular function. However, there is no good way to target these molecules to specific cells in complex tissues. Lavis is developing better ways to deliver compounds to cells, and also—extending his PhD work—seeing if he can devise ways to use designer enzymes within specific cells to unmask dyes and then drugs. Lavis collaborates extensively with many groups at Janelia to explore further refinements of this strategy, with the hope of developing a collection of easy-to-use molecules to monitor or manipulate individual cells in the mouse, fish, fly, or worm.