Some bacteria take over cells by interfering with an important process called SUMOylation, which helps cells respond to stress. 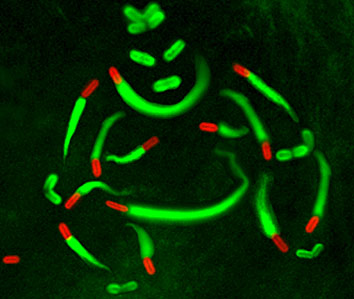 Some bacteria take over cells by interfering with an important process called SUMOylation, which helps cells respond to stress. The bacteria release toxins that reprogram proteins inside cells, which prevents the cells from fighting their invaders, HHMI international research scholar Pascale Cossart reports in a new paper. This finding adds to growing evidence that bacteria deploy many strategies to commandeer the cells they infect.

Listeria monocytogenes, the bacterium Cossart studies, can cause severe food-borne illness, but it also provides a useful model for scientists who want to understand how bacteria interact with host cells. Cossart, a microbiologist at the Pasteur Institute in Paris, has previously studied Liseria to show that pathogens exploit several other important cellular functions when they take over cells. These include ubiquitylation and phosphorylation, processes cells use to assign proteins to perform specific tasks.

“During infection, L. monocytogenes exploits an amazingly high number of mammalian cell functions to its own benefit,” Cossart writes in a report published in the April 22, 2010, issue of the journal Nature.

During infection, Listeria monocytogenes exploits an amazingly high number of mammalian cell functions to its own benefit.

As Cossart catalogued this microbial trickery, she decided to examine SUMOylation, another process that is vital to cells’ survival. In SUMOylation, existing proteins are tagged with a peptide called SUMO. Once tagged, the protein performs a different task inside the cells than it does in its non-modified form. Hundreds of proteins undergo SUMOylation, which assigns them to perform important tasks like transporting other proteins around the cell or responding to stress. As a cell experiences environmental stress, such as extreme temperatures or high salinity, the number of SUMOylated proteins inside a cell spikes, hinting that the modification somehow helps cells prepare for dangerous conditions.

Cossart and her team expected that infection by Listeria would increase intracellular SUMOylation, as they would expect if the cell faced other stressful events. Instead, within three hours of infection, they saw a dramatic drop in the number of SUMOylated proteins found in human cell lines. “We consider infection to be a stress for the cell, but as far as SUMOylation is concerned, the cell is not dealing with the infection like it deals with ordinary stress,” Cossart says.

Next, Cossart added mutant forms of Listeria to Petri dishes of cultured human cells. These genetically-modified bacteria were unable to invade the cells. Yet even these crippled bacteria prompted a dramatic decrease in SUMOylation inside the human cells. This hinted that the bacteria were secreting something that entered the cells and changed their stress response.

Cossart suspect that a known Listeria toxin called LLO, or listeriolysin O, might be responsible. Her lab had already engineered bacteria that could not produce LLO, and, when she added these defective bacteria to human cells, the number of SUMOylated proteins remained normal. This cemented her suspicion that LLO was the culprit. Cossart confirmed the finding by adding the LLO toxin directly to her cell cultures. “We saw a massive decrease in SUMOylation just with the toxin, even when bacteria were not present,” she says. “It was a very clean result.”

Because LLO decreased the SUMOylation of many different proteins, Cossart hypothesized that the toxin interfered with the cellular machinery responsible for SUMOylation. Three enzymes comprise this machinery, working in concert to attach the SUMO peptide to proteins. Cossart’s team added LLO to some cells, and then measured the concentrations of all three enzymes. She recorded a sharp drop in one of the enzymes, called Ubc9. Instead of having a half-life of eight hours (the amount of time it normally takes for half of Ubc9 to disappear inside a cell), half of the Ubc9 inside the LLO-damaged cells disappeared within just 10 minutes. By destroying Ubc9, LLO threw a monkey wrench into the entire SUMOylation assembly line.

Cossart confirmed the importance of SUMOylation in warding off infection by revving up SUMO production in some cell cultures. These super-SUMOylated cells resisted infection much better than their SUMO-defective counterparts. “We saw that the bacteria were less likely to multiply inside cells that have a lot of SUMO in them,” Cossart says. “Apparently, the SUMOylation of key proteins—we don’t know which ones yet—counteracts infection.”

Finally, Cossart infected mice with Listeria and examined their livers 48 hours and 72 hours later. The liver cells of infected mice contained much less Ubc9 than the livers of non-infected mice. This confirmed that deSUMOylation occurs during infections of live animals.

The next step was to find out if other bacteria used the same cell-weakening strategy. Cossart isolated two toxins similar to LLO produced by two different bacterial species, Clostridium perfringens and Streptococcus pneumonia. Like LLO, these toxins also degraded Ubc9. This implies that suppressing SUMOylation may be a strategy deployed by many infectious agents, she says. In fact, other laboratories found that certain viruses also interfere with SUMOylation.

Attacking SUMOylation is a very efficient strategy, Cossart says. By secreting a single toxin, Listeria interferes with the function of hundreds of cellular proteins. However, it’s still unclear exactly how this interference aids the bacteria as they invade mammalian cells. “We know that SUMOylation of key proteins somehow counteracts infection,” says Cossart. “I’m now trying to find out exactly what proteins those are, to see what they do.”