Hanna H. Gray, Ph.D., former chair of the HHMI Trustees, retires after serving the Institute since 1984. 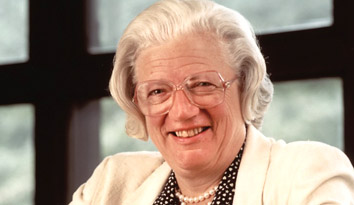 Hanna Holborn Gray, Ph.D., former president of the University of Chicago and former chair of the Trustees of the Howard Hughes Medical Institute, has retired from the Institute’s board. She was the last of the eight original trustees appointed in 1984 by the Delaware Court of Chancery to govern the Institute after the founder’s death. The Charter Trustees, as they came to be known, were appointed for life. Gray chaired the Trustees from 1997 to 2010.

“The role of trustees has to do with being clear about mission, and indeed, being, as it were, the fiduciaries of that mission,” Gray has said. “Caring about long-term planning; caring about the effects of what is done now on the future. Caring about whether the right questions are being asked, and thought about, and thought about hard.”

Gray, who has done just that, saw the Institute through four presidents, leading the selection of two—Thomas R. Cech (2000-2009) and Robert T. Tjian (2009-present)—in her role as Trustee chair.

Gray chaired an early Institute committee tasked with developing guiding principles for a grants program to complement HHMI’s core research activities. These grant-making programs ultimately became the largest privately funded education initiative of its kind in the U.S. The programs also included support for research outside of the U.S., which the Institute began in 1991.

While HHMI has remained steadfast in its model of high risk/high reward investment in scientists, during Gray’s tenure the Institute made significant changes to its process for selecting the scientists in which it invests—opening its doors to an ever-increasing pool of candidates. The fourteen Nobel laureates among HHMI’s approximately 320 scientific investigators testify to the success of the Institute’s model.

Under Gray’s leadership of the Trustees, HHMI made two seminal investments in start-up scientific institutions—the Janelia Farm Research Campus, which opened in 2006 in Ashburn, Va., and the KwaZulu-Natal Research Institute for TB and HIV (K-RITH), which opened earlier this year in Durban, South Africa.

Janelia is the Institute’s pioneering research center, where biologists work in a uniquely collaborative environment—with chemists, physicists, engineers, and computational scientists—on some of biology’s most challenging problems. Janelia scientists have the freedom and resources to pursue long-term projects of high significance.

K-RITH, a partnership of HHMI and the University of KwaZulu-Natal in Durban, is an advanced research facility where some of the brightest scientific minds from Africa and around the globe collaborate to carry out research to help control the co-infection of tuberculosis and HIV. K-RITH also is expanding scientific training in South Africa, helping to prepare a new generation of leaders in TB/HIV research.

In her last official act as a Trustee, Gray helped open K-RITH, the site of HHMI’s first investment on foreign soil and an innovation to study diseases in the context where they are most prevalent.

“In each of these activities—and many others—Hanna Gray played an essential role as a sounding board, thoughtful critic, consensus builder, and sage advisor,” said HHMI President Robert Tjian.