HHMI researchers have developed a new method for growing human liver cells outside the body, which may boost efforts to develop a vaccine or treatment for hepatitis C infection. 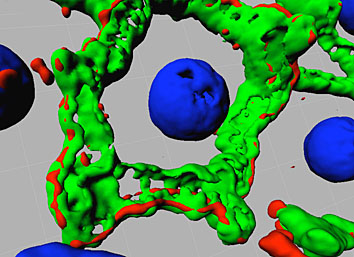 Howard Hughes Medical Institute researchers and their colleagues at the Rockefeller University have developed a new method for growing human liver cells outside the body. Using the new cell culture system, scientists can now study hepatitis C virus in the lab over a period of weeks—which may boost efforts to develop a vaccine or broadly effective treatment for the infection. Until now, scientists working on hepatitis C vaccine design have been hampered by the lack of an animal model or a culture system that could support long-term study of viral infection.

In new research reported in the Proceedings of the National Academy of Sciences (PNAS), the scientists report they have reproduced the supportive network of cells and other factors that allow liver cells to thrive in the body. The researchers say that their system is one of the first to allow for sustainable infection with hepatitis C virus (HCV), a major public health threat in many parts of the world. The culture system will help researchers learn more about how the virus infects liver cells and improve the efficiency of pre-clinical screening of drugs to treat HCV infection. Tissue engineer Sangeeta Bhatia, a Howard Hughes Medical Institute investigator at the Massachusetts Institute of Technology, and virologist Charles Rice, director of the Center for the Study of Hepatitis C at Rockefeller University, worked together to develop the new culture system. Their work is published in PNAS the week of January 25, 2010.

For the past several years, Bhatia has been developing and refining systems for growing human liver cells, which are very difficult to keep alive and functioning normally outside the body. Isolated liver cells must maintain a particular architecture, and Bhatia said there is an optimum number that can be grown in a single colony. The cells also require a complex mix of nutrients and signals from the microenvironment in which they normally reside.

In Bhatia’s laboratory at MIT, Salman Khetani has created what he terms micropatterned co-cultures (MPCCs) that provide a supportive environment that helps liver cells thrive. Tools adapted from the fabrication of computers chips are used to dot microscopic, circular clumps of human liver cells onto plastic or glass plates. Then the scientists add supporting cells—known as stroma - and various factors that mimic their natural environment, positioning them where they can most effectively support the liver cells. In previous reports, Bhatia said, “we showed this could boost their longevity and function.”

Next the team wanted to demonstrate that HCV infects the cultured cells the same way it would infect liver cells in the human body. Khetani and Alexander Ploss, a member of Rice’s lab, designed experiments to examine whether the cultured cells possessed the normal entry points used by HCV virus particles and whether the viruses used them.

The team of investigators also had to devise an assay that could demonstrate rapidly and conclusively that the viruses were replicating—going through their complete life cycle—within the cells. At Rockefeller, Rice’s group had developed strategies to measure infection more rapidly and accurately than standard techniques allowed. Those techniques were developed for an HCV “pseudoparticle” virus—an inert virus engineered to carry HCV glycoproteins on its surface, along with a gene for green fluorescent protein. This allows researchers to visualize the virus’s cell-entry process separately from later steps of the HCV life cycle. When viewing liver cells under a microscope, the glow of the green fluorescent protein indicates successful entry of HCV pseudoparticles into the target cell. A second tracking method involved an HCV variant engineered to express another gene that produces a tell-tale glow. That gene, luciferase, produces a protein that would be secreted by the HCV particles when they replicated, meaning infected liver cells would light up as long as the virus continued to reproduce inside.

Applying these techniques to HCV, Ploss, Khetani, Rice and Bhatia showed that a small percentage of the liver cells grown in their culture system—both those that had been frozen and others freshly obtained—could be persistently infected for as long as two weeks.

The MPCC culture system, they conclude, will allow researchers to study the life cycle of HCV over days or weeks, and will provide, for the first time, an opportunity to test the effects of potential intervention strategies.

Many future projects can be envisioned now that the system has proven workable, Bhatia said. For instance, virologists will be in a better position to understand the virus’ behavior because the lab-grown colonies are more life-like than in previous infection systems. Screening of candidate vaccines and antiviral drugs can be carried out simultaneously with testing for liver toxicity.

The culture system may also be a valuable tool in efforts to solve a critical problem in treating HCV-infected patients whose livers fail: If they receive a liver transplant, the donor organ is almost certain to become infected with HCV virus remaining in the patient’s body. “Researchers are looking at administering, along with the transplant, antibodies that would block re-infection. The culture system could be very helpful in testing such antibodies,” said Bhatia.