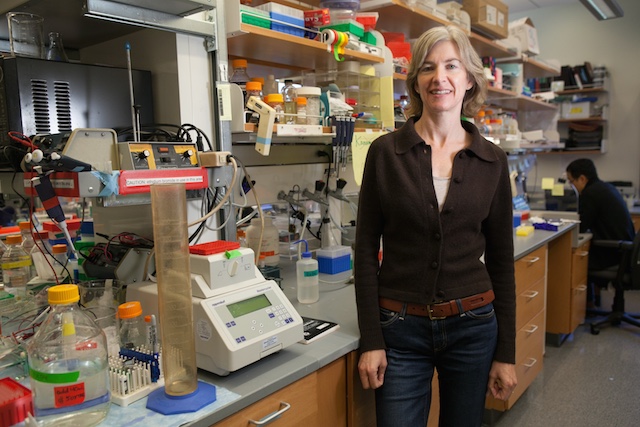 The Breakthrough Prizes recognize pioneering work in physics and genetics, cosmology, and neurology and mathematics. Each prize carries an award of $3 million. Live streaming of the Breakthrough Prize in Life Sciences Symposium at Stanford University will begin at 9 a.m., PST, today.

"The world faces many fundamental challenges today, and there are many amazing scientists, researchers and engineers helping us solve them,” said Mark Zuckerberg, a founder of the Breakthrough Prize Foundation and Facebook. “This year's Breakthrough Prize winners have made discoveries that will help cure disease and move the world forward. They deserve to be recognized as heroes."

Doudna was honored with Emmanuelle Charpentier of the Helmholtz Center for Infection Research and Umeå University for harnessing an ancient mechanism of bacterial immunity into a powerful and general technology for editing genomes, with wide-ranging implications across biology and medicine.

In the genetic world, DNA often takes the spotlight while RNA works behind the scenes to carry out the complicated operations within a cell, like retrieving information from DNA and using it to build proteins. Increasingly, however, RNA is attracting more attention from scientists because it has proven far more versatile than DNA, despite their chemical similarities.

Many bacteria have a CRISPR-based immune system that is used to recognize and destroy the genomes of invading viruses and plasmids. In 2012, the labs of Doudna and Charpentier showed that the protein Cas9 is a DNA-cutting enzyme guided by RNA. Cas9 relies on two short RNA guide sequences to find foreign DNA, and then cleaves the target sequences, thereby silencing the invaders' genes. The process is specific and efficient enough to fend off viral infections in bacteria, and those same qualities have made the CRISPR system a powerful research tool. Doudna's team adapted the system so that it can be guided by a single short RNA molecule. Researchers who use the system for genome editing can customize that RNA so that it directs Cas9 to cleave at a desired location in the genome.

In addition to Doudna and Charpentier, the winners of the 2015 Breakthrough Prize in Life Sciences are:

Founded in 2013, the Breakthrough Prize Foundation is a not-for-profit corporation dedicated to advancing breakthrough research, celebrating scientists and generating excitement about the pursuit of science as a career. The Foundation was founded by Sergey Brin and Anne Wojcicki, Mark Zuckerberg and Priscilla Chan, Jack Ma and Cathy Zhang, and Yuri and Julia Milner.