Janelia neurobiologist Igor Siwanowicz wins first prize in the 2013 Olympus BioScape Digital Imaging Competition with a photo that shows the gaping trap of an aquatic carnivorous plant, humped bladderwort about to consume microinvertebrates. 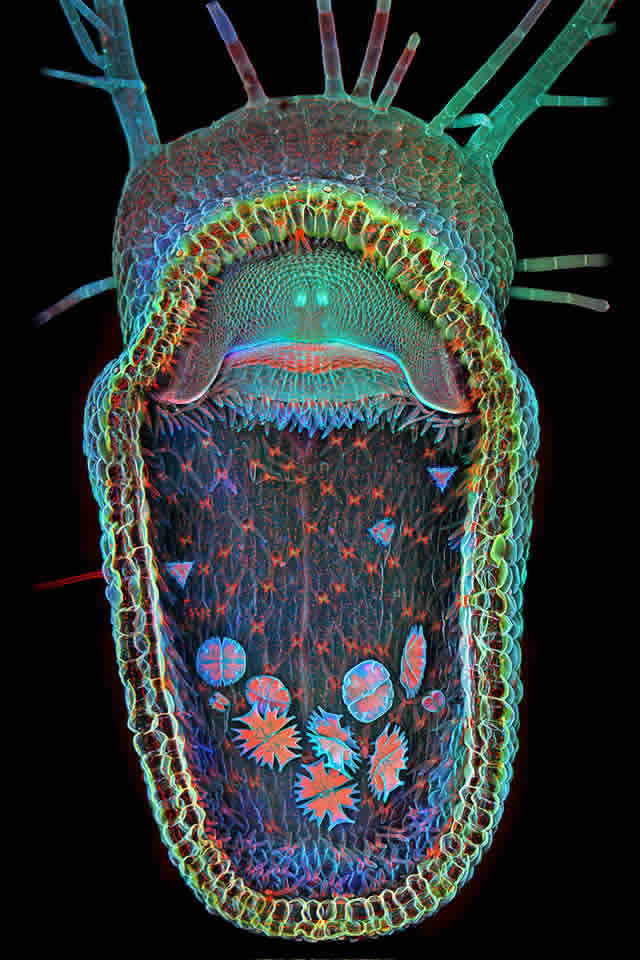 Igor Siwanowicz, a neurobiologist at the Howard Hughes Medical Institute’s Janelia Farm Research Campus, has won first prize in the 2013 Olympus BioScapes Digital Imaging Competition, one of the world’s most prestigious events for showcasing microscope images and movies of life science subjects. The competition received more than 2,000 entries from people in 71 countries.

Siwanowicz’s winning entry shows the gaping trap of an aquatic carnivorous plant, humped bladderwort (Utricularia gibba). The plant feeds on microinvertebrates, and sucks them in within a millisecond after they touch the trigger hairs growing from the center of the plant’s dome-shaped trap. All entries were judged by a panel of outstanding authorities in microscope imaging. For the winning image, Siwanowicz magnified the plant 100 times using a laser scanning confocal microscope and used cellulose-binding fluorescent dye Calcofluor White to visualize the cell walls of the plant.

Siwanowicz was also awarded third prize in the competition for his image of single-cell fresh water algae, desmids. Another Siwanowicz image earned an honorable mention for an image of planctonic rotifers surrounding a desmid.

Another HHMI scientist also placed in the top ten this year—Yaron Fuchs, a member of Hermann Steller’s HHMI lab at The Rockerfeller University in New York, received eighth prize for a confocal image of a mouse tail showing stem cells.

Siwanowicz has been working with Janelia lab head Anthony Leonardo’s group since 2011, where he studies dragonfly prey-capture behavior. He applies his award-winning imaging techniques to his lab work to analyze the structure of the dragonfly’s neck and wing joints.

A selection of the 2013 winning images will tour the U.S., Italy, Chile, Mexico, Brazil, Canada, Asia, and the Middle East throughout 2014.

This year the competition is celebrating its tenth year. It has received more than 10,000 life science images from around the world over that time, on a wide range of subjects, ranging from nanotechnology to medicine, from AIDS to Alzheimer’s, cancer research, botany, drug discovery and genomics.