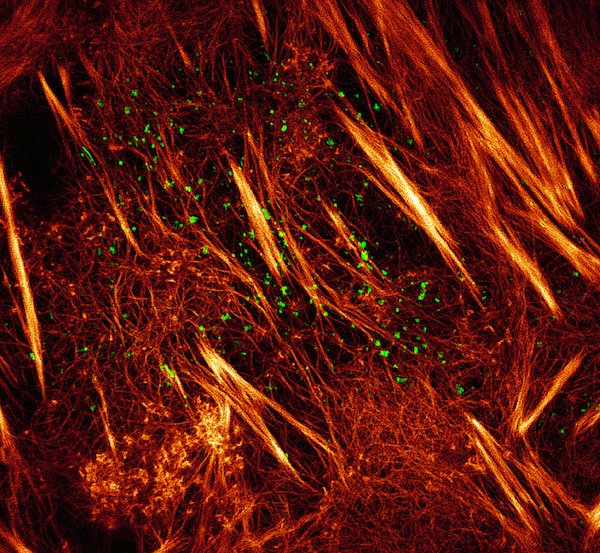 The vibrant videos produced with the new technology show the movement and interactions of proteins as cells remodel their structural supports or reorganize their membranes to take up molecules from outside the cell. Janelia group leader Eric Betzig, postdoctoral fellow Dong Li and their colleagues have added the two new technologies -- both variations on SIM -- to the set of tools available for super-resolution imaging. Super-resolution optical microscopy produces images whose spatial resolution surpasses a theoretical limit imposed by the wavelength of light, offering extraordinary visual detail of structures inside cells. But until now, super-resolution methods have been impractical for use in imaging living cells.

High-NA TIRF-SIM for 91 frames at 4-second intervals in a COS-7 cell expressing mEmerald-clathrin (green) and mCherry-Lifeact (orange-red).

“These methods set a new standard for how far you can push the speed and non-invasiveness of super-resolution imaging,” Betzig says of the techniques his team described in the August 28, 2015, issue of the journal Science. “This will bring super-resolution to live-cell imaging for real.”

In traditional SIM, the sample under the lens is observed while it is illuminated by a pattern of light (more like a bar code than the light from a lamp). Several different light patterns are applied, and the resulting moiré patterns are captured from several angles each time by a digital camera. Computer software then extracts the information in the moiré images and translates it into a three-dimensional, high-resolution reconstruction. The final reconstruction has twice the spatial resolution that can be obtained with traditional light microscopy.

Betzig was one of three scientists awarded the 2014 Nobel Prize in Chemistry for the development of super-resolved fluorescence microscopy. He says SIM has not received as much attention as other super-resolution methods largely because those other methods offer more dramatic gains in spatial resolution. But he notes that SIM has always offered two advantages over alternative super-resolution methods, including photoactivated localization microscopy (PALM), which he developed in 2006 with Janelia colleague Harald Hess.

Both PALM and stimulated emission depletion (STED) microscopy, the other super-resolution technique recognized with the 2014 Nobel Prize, illuminate samples with so much light that fluorescently labeled proteins fade and the sample is quickly damaged, making prolonged imaging impossible. SIM, however, is different. “I fell in love with SIM because of its speed and the fact that it took so much less light than the other methods,” Betzig says.

Betzig began working with SIM shortly after the death in 2011 of one of its pioneers, Mats Gustafsson, who was a group leader at Janelia. Betzig was already convinced that SIM had the potential to generate significant insights into the inner workings of cells, and he suspected that improving the technique's spatial resolution would go a long way toward increasing its use by biologists.

Gustafsson and graduate student Hesper Rego had achieved higher-resolution SIM with a variation called saturated depletion non-linear SIM, but that method trades improvements in spatial resolution for harsher conditions and a loss of speed. Betzig saw a way around that trade-off.

Saturated depletion enhances the resolution of SIM images by taking advantage of fluorescent protein labels that can be switched on and off with light. To generate an image, all of the fluorescent labels in a protein are switched on, then a wave of light is used to deactivate most of them. After exposure to the deactivating light, only molecules at the darkest regions of the light wave continue to fluoresce. These provide higher frequency information and sharpen the resulting image. An image is captured and the cycle is repeated 25 times or more to generate data for the final image. The principle is very similar to the way super-resolution in achieved in STED or a related method called RESOLFT, Betzig says.

The method is not suited to live imaging, he says, because it takes too long to switch the photoactivatable molecules on and off. What's more, the repeated light exposure damages cells and their fluorescent labels. “The problem with this approach is that you first turn on all the molecules, then you immediately turn off almost all the molecules. The molecules you've turned off don't contribute anything to the image, but you've just fried them twice. You're stressing the molecules, and it takes a lot of time, which you don't have, because the cell is moving.”

The solution was simple, Betzig says: “Don't turn on all of the molecules. There's no need to do that.” Instead, the new method, called patterned photoactivation non-linear SIM, begins by switching on just a subset of fluorescent labels in a sample with a pattern of light. “The patterning of that gives you some high resolution information already,” he explains. A new pattern of light is used to deactivate molecules, and additional information is read out of their deactivation. The combined effect of those patterns leads to final images with 62-nanometer resolution—better than standard SIM and a three-fold improvement over the limits imposed by the wavelength of light.

“We can do it and we can do it fast,” he says. That's important, he says, because for imaging dynamic processes, an increase in spatial resolution is meaningless without a corresponding increase in speed. “If something in the cell is moving at a micron a second and I have one micron resolution, I can take that image in a second. But if I have 1/10-micron resolution, I have to take the data in a tenth of a second, or else it will smear out,” he explains.

Patterned photoactivation non-linear SIM captures the 25 images that go into a final reconstruction in about one-third of a second. Because it does so efficiently, using low intensity light and gleaning information from every photon emitted from a sample's fluorescent labels, labels are preserved so that the microscope can image longer, letting scientists watch more action unfold.

The team used patterned photoactivation non-linear SIM to produce videos showing structural proteins break down and reassemble themselves as cells move and change shape, as well as the dynamics of tiny pits on cell surfaces called caveolae.

Betzig's team also reports in the Science paper that they can boost the spatial resolution of SIM to 84 nanometers by imaging with a commercially available microscope objective with an ultra-high numerical aperture. The aperture restricts light exposure to a very small fraction of a sample, limiting damage to cells and fluorescent molecules, and the method can be used to image multiple colors at the same time, so scientists can simultaneously track several different proteins.

Using the high numerical aperture approach, Betzig's team was able to watch the movements and interactions of several structural proteins during the formation of focal adhesions, physical links between the interior and exterior of a cell. They also followed the growth and internalization of clathrin-coated pits, structures that facilitate the intake of molecules from outside of the cell. Their quantitative analysis answered several questions about the pits' distribution and the relationship between pits' size and lifespan that could not be addressed with previous imaging methods.

Betzig's team is continuing to develop their SIM technologies, and say further improvements are likely. They are also eager to work with biologists to continue to explore potential applications and refine their techniques' usability.

For now, scientists who want to experiment with the new SIM methods can arrange to do so through Janelia's Advanced Imaging Center, which provides access to cutting-edge microscopy technology at no cost. Eventually, Betzig says, it should be fairly straightforward to make the SIM technologies accessible and affordable to other labs. “Most of the magic is in the software, not the hardware,” he says.