The program will be carried out through the Gorongosa Restoration Project (GRP), a U.S. philanthropy that has led extraordinary efforts to restore Gorongosa National Park over the last ten years. The GRP has been on the frontlines in combatting the loss of biodiversity – one of most important biological and environmental issues in the world today.

USAID is a donor and adviser to the GRP and U.S Ambassador Douglas Griffiths said: “Gorongosa is a magical place, not only as a cauldron of biodiversity, but also for the confluence of scientists, conservationists, and development experts working to understand it and improve the livelihoods of people living around the Park. We are delighted that the Howard Hughes Medical Institute is joining one of the world’s most productive private-public partnerships for conservation. This grant will inspire a new generation of Mozambican and international scientists to explore the mysteries of life on our planet.”

Gorongosa National Park and its buffer zone cover about 10,000 square kilometers in the Great African Rift Valley in central Mozambique. Although Mozambique achieved independence from Portugal in 1975, the ensuing civil war took a toll on the country and Gorongosa. In 2008, the government of Mozambique signed a 20-year public-private partnership with the GRP, a nonprofit organization formed by the Carr Foundation.

“Young Mozambicans are eager to study conservation sciences and this support from HHMI will make it possible to train a generation of Mozambicans in a variety of disciplines, who will then lead Gorongosa and other national parks and reserves throughout the country,” said Greg Carr, president of the GRP. 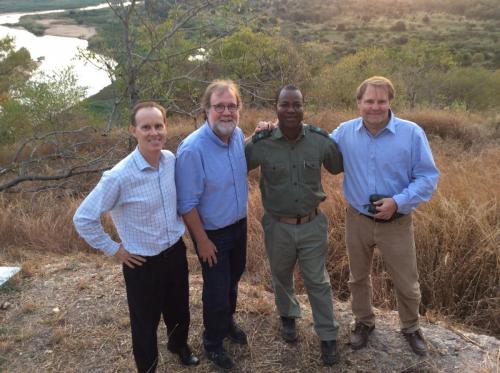 During the last ten years, the GRP has assisted local farmers, built health clinics and schools, rebuilt Park infrastructure, hired and trained rangers, reintroduced species to the ecosystem, and reestablished a tourism industry in Gorongosa. In 2014, the GRP celebrated another milestone with the inauguration of the E.O. Wilson Biodiversity Laboratory, which is poised to greatly increase both research in the Park and science education for Mozambican students.

HHMI funding will be used to support personnel, new educational programs, and classroom infrastructure at the E.O. Wilson Biodiversity Laboratory in the Park. Funding will begin in July 2015.

“HHMI will be helping to build vital science capacity for managing the Park’s and Mozambique’s extensive biodiversity resources,” said Sean B. Carroll, vice president of science education at HHMI. “Gorongosa National Park is one of the crown jewels of Africa, and it is also equally important as a destination for science education. This training will build science capacity in Mozambique, which will pay long-term dividends by preserving biodiversity and in helping sustain stewardship of this country’s vast national park and reserve system.”

The Howard Hughes Medical Institute plays an influential role in advancing scientific research and education in the United States. Its scientists, located across the country and around the world, have made important discoveries that advance both human health and our fundamental understanding of biology. The Institute also aims to transform science education into a creative, interdisciplinary endeavor that reflects the excitement of real research. www.hhmi.org

The Gorongosa Restoration Project integrates conservation and human development with the understanding that a healthy ecosystem will benefit human beings, who in turn will be motivated to support Gorongosa Park objectives. For more general information, visit www.gorongosa.org