How the African Striped Mouse Got Its Stripes

HHMI researchers find that a gene that blocks the differentiation of pigment-producing cells in the skin of the African striped mouse helps in generating the mouse’s characteristic light-colored stripes. 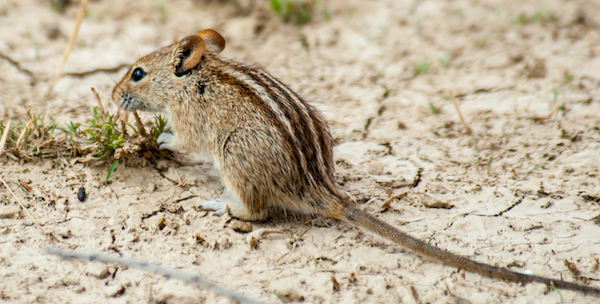 A gene called Alx3 blocks the differentiation of pigment-producing cells in the skin of the African striped mouse, thus generating the mouse’s characteristic light-colored stripes, a new study shows. The same gene also determines the stripe pattern of North American chipmunks, and the similar stripe patterns evolved independently in these two groups of animals, researchers report in this week’s issue of Nature.

How animal color patterns develop and evolve is a longstanding question in developmental biology. HHMI Investigator Hopi Hoekstra of Harvard University studies the development and evolution of stripe patterns in wild mice because these stripes may play an important role in helping the mice escape predators. In addition, the wild mice are closely related to lab mice, for which a variety of genetic and genomic tools are available. “We are working on a non-model organism that is closely related to a model, so we can get the best of both worlds,” Hoekstra explained.

To investigate how the African striped mouse got its stripes, Ricardo Mallarino, a postdoctoral fellow in Hoekstra’s lab, first looked at how the stripes form during mouse embryogenesis. He found that the pigment producing cells in the skin, called melanocytes, failed to differentiate in regions that corresponded to the location of the light-colored stripe. The melanocytes that fail to differentiate cannot produce pigment, thus leading to light colored hair.

To figure out which genes were involved, Mallarino and colleagues used RNA sequencing to measure all the genes that were activated in the skin in the light colored stripe compared to those in the skin that grew darker hair. The team identified a gene called Alx3 that was highly expressed in the light colored stripe but not in the dark-haired areas. When they compared the expression of Alx3 in the African striped mouse and in the regular lab mouse, they found that all mice express Alx3 on their bellies, but the African striped mouse also expresses Alx3 in a striped pattern on its back. “It looks like what happened is that Alx3 has been co-opted from its role in making light-colored bellies, and now it’s expressed where the stripe is going to form,” explained Hoekstra.

The gene had not been implicated in pigmentation before, so the researchers weren’t sure how the gene was affecting mouse hair color. To figure that out, the researchers conducted protein-DNA binding assays to identify the sections of DNA to which the ALX3 protein could bind. They discovered that ALX3, a transcription factor, binds to the promoter and represses MITF, a known regulator of melanocyte differentiation.

To further probe the function of the gene, the researchers over- and under-expressed it in lab mice and in cell culture, respectively. Using ultrasound-guided injections, the researchers introduced a lentivirus carrying the Alx3 gene into pregnant mice. The virus entered the developing embryos where it over-expressed Alx3 in the melanocytes. In these embryos, the melanocytes failed to differentiate, leading to a decrease in pigment synthesis. By contrast, in the cells where Alx3 was knocked down using small hairpin RNAs, the researchers found that melanin synthesis increased, leading to an increase in pigment production.

To see if this newly discovered mechanism controlling mouse hair color was a general phenomenon, the researchers turned to the North American chipmunk, which has similar stripes and which is evolutionarily separated from the African striped mouse by 70 million years. Analysis of skin biopsies from chipmunks showed a similar pattern of Alx3 expression. “The same mechanism has repeatedly evolved in two lineages for the same purpose,” explained Mallarino.

Looking forward, the researchers would like to understand what controls where Alx3 is expressed, and whether variation in the timing and location of Alx3 expression can explain the evolution of novel color patterns in nature. “The next step is to figure out what controls Alx3 expression,” said Mallarino. “Can you just tinker with where and when Alx3 is expressed to generate a diversity of striping patterns? We don’t know the answer, but that is something we are excited about,” added Hoekstra.