An accomplished group, the 26 new HHMI investigators are at the forefront of discovery research. 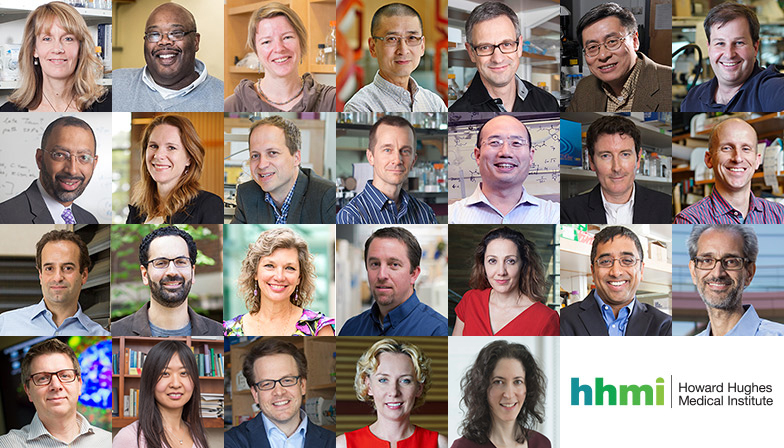 The Howard Hughes Medical Institute (HHMI) announced today that 26 of the nation’s top biomedical researchers will become HHMI investigators and will receive the flexible support necessary to move their research in creative new directions. The initiative represents an investment in basic biomedical research of $153 million over the next five years.

The scientists represent 19 institutions from across the United States. The new HHMI investigators – which include three current HHMI early career scientists -- were selected for their individual scientific excellence from a group of 894 eligible applicants.

“Scientific discovery requires original thinking and creativity,” says HHMI President Robert Tjian. “Every scientist selected has demonstrated these qualities. One of the most important things we can do at HHMI is to continue to support and encourage the best discovery research. We don’t know this for certain, but the ideas that emerge from these labs might one day change the world, and it’s our privilege to help make that happen.”

HHMI will provide each investigator with his or her full salary, benefits, and a research budget over their initial five-year appointment. The Institute will also cover other expenses, including research space and the purchase of critical equipment. Their appointment may be renewed for additional five-year terms, each contingent on a successful scientific review.

The new investigators represent a variety of disciplines, including biochemistry, biophysics, cell biology, computational biology, genetics, immunology, neuroscience, and virology. Some of the questions they are asking include:

HHMI encourages its investigators to push their research fields into new areas of inquiry. By employing scientists as HHMI investigators — rather than awarding them research grants — the Institute is guided by the principle of “people, not projects.” HHMI investigators have the freedom to explore and, if necessary, to change direction in their research. Moreover, they have support to follow their ideas through to fruition — even if that process takes many years.

“Our essential job is to identify and support the best people we can find,” said Erin O’Shea, vice president and chief scientific officer. “If you study the accomplishments of the scientists we have selected, you will find they are an amazing group of talented individuals. Many are already considered leaders in their fields and some have established entirely new fields of research.”

Mid-career researchers with 5 to 15 years of experience as faculty members at more than 200 institutions were eligible to apply. Applications from the 894 eligible applicants were evaluated by distinguished biomedical researchers, who narrowed the field to 59 semifinalists. The semifinalists attended a scientific symposium at HHMI’s Janelia Research Campus in April 2015 and presented a brief research talk to members of the review panel. The 26 new HHMI investigators were selected shortly after the scientific symposium.

The new HHMI investigators are expected to begin their appointments in September 2015.

The Howard Hughes Medical Institute plays a powerful role in advancing scientific research and education in the United States. Its scientists, located across the country and around the world, have made important discoveries that advance both human health and our fundamental understanding of biology. In a complementary program at HHMI's Janelia Research Campus in Ashburn, Virginia, leading scientists are pursuing long-term, high-risk, high-reward research in a campus designed to bring together researchers from disparate disciplines. The Institute also aims to transform science education into a creative, interdisciplinary endeavor that reflects the excitement of real research.

During fiscal year 2014, the Institute made disbursements of $919 million, including $706 million for biomedical research and $77 million in support of science education. The Institute’s endowment at the close of fiscal year 2014 stood at about $18.6 billion. HHMI’s headquarters are located in Chevy Chase, Maryland, just outside Washington, D.C.