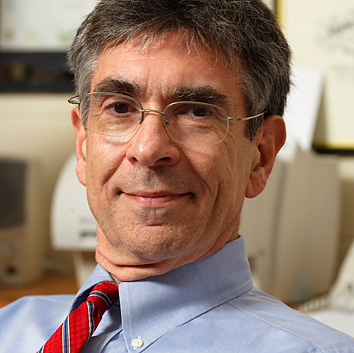 The Royal Swedish Academy of Sciences announced today that Robert J. Lefkowitz, a Howard Hughes Medical Institute (HHMI) investigator at Duke University, and Brian K. Kobilka of Stanford University School of Medicine are the recipients of the 2012 Nobel Prize in Chemistry for studies of G-protein coupled receptors.

According to the Royal Swedish Academy, this year's Nobel Prize in Chemistry was awarded for groundbreaking discoveries that reveal the inner workings of an important family of such receptors: G-protein–coupled receptors.

For a long time, it remained a mystery how cells could sense their environment. Scientists knew that hormones such as adrenalin had powerful effects: increasing blood pressure and making the heart beat faster. They suspected that cell surfaces contained some kind of recipient for hormones. But what these receptors actually consisted of and how they worked remained obscured for most of the 20th Century.

Cells in our body are constantly exposed to a variety of chemical signals—hormones, neurotransmitters, growth factors, and sometimes even drugs—that they need to interpret and translate into a response. This task is handled by receptors that dot cell membranes. Lefkowitz essentially defined the field of receptor biology through his work with G protein–coupled receptors, the largest and most pervasive family of cell receptors. A thousand or more of these receptors are known to exist throughout the body, playing critical roles in sight, smell, and taste, and in regulating heart rate, blood pressure, pain tolerance, glucose metabolism, and virtually all known physiological processes.

Surprisingly, Lefkowitz never fully intended to make research the focus of his career. As a child growing up in the Bronx, he read medical fiction and detective stories, and decided in third grade that he wanted to become a physician. He went to medical school at Columbia University, finishing first in his class. But during a two-year fellowship at the National Institutes of Health from 1968–70, he got hooked on receptor biology, a field that was then in its infancy.

At that time, experiments in other laboratories had only suggested the presence of cell receptors, but no one had ever proved their existence. Lefkowitz, however, was convinced they were real, and he set out to isolate them. Beginning with the β2-adrenergic receptor in 1982, Lefkowitz isolated eight of the nine subtypes of adrenergic receptors and determined their complete amino acid sequences. The βadrenergic receptors are among the most common G protein–coupled receptors, regulating the body's fight-or-flight response by responding to epinephrine.

Lefkowitz also discovered two new families of proteins that desensitize G protein–coupled receptors—a finding that has helped scientists understand, in molecular terms, how receptors become tolerant to certain drugs. The first is a novel family of enzymes called the G protein–coupled receptor kinases (GRKs) including the βadrenergic receptor kinase (βRK), and the second is a group of proteins called arrestins. Both protein families, he has shown, are widely distributed, and their actions are not limited to the βadrenergic receptors.

Understanding the actions of arrestins and GRKs eventually may lead to new treatments for human diseases, including heart failure, Lefkowitz predicts. Recently his laboratory has discovered that the βarrestin/GRK system is actually bifunctional. It serves as a signal transduction system by scaffolding various signaling systems such as MAP kinases or AKT to the receptors, even as it desensitizes G protein signaling. Lefkowitz has found that it is possible to design drugs that, while serving as antagonists for G protein signaling, serve as agonists or stimulants of beneficial βarrestin-mediated signaling. Such "biased" ligands may represent an entirely novel class of therapeutic agents.

In addition to more than three decades of discoveries in the laboratory, Lefkowitz is widely recognized for his dedication to mentoring and his tireless devotion to his students. Over the years, he has trained several hundred graduate students and postdocs in his laboratory. While acknowledging that there is no recipe for turning out successful researchers, Lefkowitz admits he is very much a "hands-on" mentor, one who enjoys daily interactions with those working in his laboratory. In small group meetings held three or four times a week in his office, he discusses results and plots strategy with students working on related projects.

When it comes to his own research, Lefkowitz says he remains fascinated by the way it "continuously renews itself and always feels fresh. I come to work every day with a sense of great anticipation and curiosity about what new discoveries and insights will come our way. Every question that we can answer poses several new ones that seem even more interesting than the one we've just answered."