Thomas A. Steitz, Venkatraman Ramakrishnan, and Ada E. Yonath awarded the 2009 Nobel Prize in Chemistry for studies of the structure and function of the ribosome. 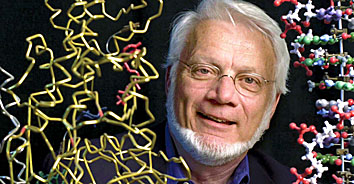 The Royal Swedish Academy of Sciences announced today that Thomas A. Steitz, a Howard Hughes Medical Institute investigator at Yale University, Venkatraman Ramakrishnan of the Medical Research Council Laboratory of Molecular Biology, and Ada E. Yonath of the Weizmann Institute of Science, are the recipients of the 2009 Nobel Prize in Chemistry for studies of the structure and function of the ribosome.

According to the Royal Swedish Academy, this year's Nobel Prize in Chemistry was awarded to the three scientists for research that shows what the ribosome looks like and how it functions at the atomic level. All three have used a method called x-ray crystallography to map the position for each and every one of the hundreds of thousands of atoms that make up the ribosome.

In addition to the three awardees, Harry Noller of the University of California Santa Cruz and Peter Moore at Yale made enormous contributions to solving the structure of the ribosome.

An understanding of the ribosome's innermost workings is important for a scientific understanding of life. This knowledge can be put to a practical and immediate use; many of today's antibiotics cure various diseases by blocking the function of bacterial ribosomes. Without functional ribosomes, bacteria cannot survive. This is why ribosomes are such an important target for new antibiotics.

The Ribosome at Work: The ribosome is a molecular factory that translates the genetic information in RNA into a string of amino acids that becomes a protein. The following animation, which is part of HHMI's Biointeractive web site, shows how the ribosome works.

The ribosome is a large molecular complex of RNA and protein. When ribosomes are isolated from cell extracts, two different fractions are obtained, representing two subunits. The smaller 30S subunit binds the messenger RNA that constitutes the protein's genetic blueprint, as well as the transfer RNA that carries each specific amino acid to be added to the growing chainlike protein molecule. The larger 50S subunit catalyzes the formation of the bond between each amino acid and the growing protein chain.

Steitz uses the methods of x-ray crystallography and molecular biology to establish the structures and mechanisms of the proteins and nucleic acids involved in gene expression, replication, and recombination. In x-ray crystallography, protein crystals are bombarded with intense x-ray beams. As the x-rays pass through and bounce off of atoms in the crystal, they leave a diffraction pattern, which can then be analyzed to determine the three-dimensional shape of the protein.

In 2000, Steitz and his colleagues used the 2.5 billion electron volt x-ray beam at Brookhaven National Laboratory's National Synchrotron Light Source to perform x-ray crystallography on crystals of 50S subunits that were produced with osmium and iridium atoms attached to act as landmarks. Additional data were gathered using the Advanced Photon Source at Argonne National Laboratory.

As with most scientific achievements, the work built on a foundation established by the thousands of scientists who have pored over every aspect of ribosome function during the past 50 years. Through the years, research groups large and small have amassed an impressive amount of information about the ribosome, but no group has succeeded in creating an accurate three-dimensional map.

"Our previous maps of the 50S subunit at nine- and five-Ångström resolution gave us some hints at the structure, but not until we achieved the 2.5-Ångström resolution could we resolve the atomic structure of all 100,000 atoms that are well ordered in the crystal," said Steitz. "This structure is about four times larger than any other such structure that has ever been determined, and the 3,000 nucleotides of RNA increased the amount of known RNA structure by about 4 to 5 fold."

According to Steitz, the process of achieving such high resolution meant painstakingly improving the process of growing larger, more complete ribosome crystals, and solving structures of those crystals at progressively higher resolution. Each lower-resolution map provided information that could help the scientists understand the ultimate high-resolution map, he said.

"I think we were amazed at each stage at the overwhelming complexity of the RNA folding in the ribosome," said Steitz. "But I think the most surprising observation was that the proteins were embedded among the RNA helices, penetrating into the interior of the ribosome like tentacles."

Such penetration of proteins explains why previous researchers had not been able to show that the ribosome depended solely on RNA as its catalytic molecule," said Steitz.

"Since Thomas Cech had shown that RNA could have catalytic activity, we had suspected that the 50S subunit was basically a ribozyme," said Steitz. "However, there was no proof. Nobody had been able to show that the RNA by itself showed catalytic properties in the absence of the protein. Now we can see that part of the reason is probably the nature of these proteins that are holding the ribosome together.

"Our structure shows that these proteins are deeply embedded in the RNA and are essential for its folding. And it shows unambiguously that the ribosome is a ribozyme because we can see where the substrate binds and there's no protein atom near enough to that site to produce any catalytic activity."

The structure also provides intriguing insights into how the ribosome might originally have evolved, perhaps as a machine to make short proteins, or peptides, said Steitz.

"Earlier experiments by Cech and others had shown that it was possible to create RNA molecules that have some of the catalytic properties of the ribosome in peptide synthesis," he said. "Now we can see in this structure that some aspects of the native ribosome reflect some aspects of those RNA molecules produced through in vitro evolution. So, the expectation that a small RNA molecule could have evolved to catalyze peptide bond synthesis is not a far stretch.

"However, that peptide-making RNA molecule would not have been directed by messages from some early genome," he added. "How evolution managed to progress from making a random peptide to messenger-directed synthesis, we haven't a clue."

According to Steitz, the high-resolution structure offered a pathway to far deeper understanding of the protein-assembling machinery. "We're certainly not done with the scientific challenges presented by the ribosome," said Steitz. "Although I must say I do feel as if we're standing on Mount Everest at the moment and I'm now looking to find K2."

In more recent experiments, Steitz and his research group have been chiseling away at the problem of antibiotic resistance. Their research has produced a detailed explanation of how the main target of antibiotics in bacterial cells evolves to become resistant to some of these medications. The findings are already leading to new experimental antibiotics that are being engineered to circumvent resistance, which is a major worldwide health problem.

After a postdoctoral year at Harvard, he moved to the Medical Research Council Laboratory of Molecular Biology in Cambridge, England, to work as a Jane Coffin Childs fellow with David Blow. He next joined the Yale faculty, where he has remained, except for sabbatical work with Klaus Weber in Göttingen, Germany; Aaron Klug at Cambridge; John Abelson at the California Institute of Technology; and Thomas Cech and Olke Uhlenbeck at the University of Colorado.

He has received the Pfizer Prize from the American Chemical Society, the Lewis S. Rosenstiel Award for distinguished work in basic medical sciences, the 2001 Newcomb Cleveland Prize from the American Association for the Advancement of Science, the Lawrence University Lucia R. Briggs Distinguished Achievement Award, the 2006 Keio Medical Science Prize, and the 2007 Gairdner International Award. Dr. Steitz is a member of the National Academy of Sciences and the American Academy of Arts and Sciences. He was recently elected a fellow of the American Association for the Advancement of Science.