Ninety-one schools have been invited to submit full proposals to apply for grants through HHMI’s $60 million Inclusive Excellence initiative that is encouraging colleges and universities to broaden access to science excellence for all students.

The Howard Hughes Medical Institute has invited 91 schools to submit full proposals to apply for grants through HHMI’s $60 million Inclusive Excellence initiative that is encouraging colleges and universities to broaden access to science excellence for all students. 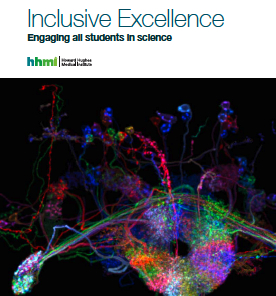 The proposals will be considered for first-round awards that will begin in September 2017. HHMI plans to award approximately 60 grants in two rounds of open competitions, each of which will follow the same format.

In this round of the competition, HHMI will award up to 30 grants to institutions that are committed to inclusive science education and are well positioned to work over the next five years to improve their ability to become more inclusive of all students. HHMI’s long-term aim is for successful strategies pioneered by the grantee institutions to serve as models to be adapted and adopted by other institutions.

The 91 schools were selected from 511 that submitted pre-proposals in response to HHMI’s launch of the initiative in May 2015. Roughly one-third of the 91 schools have never been invited to apply to previous HHMI grants competitions. In addition, the 91 schools represent the broad spectrum of the schools in the 2015 Carnegie Classification: doctoral universities (40), master’s colleges and universities (29), baccalaureate colleges (21), and tribal colleges (1).

HHMI opened this competition to more than 1,500 U.S. colleges and universities. In the past, HHMI science education grants competitions were by invitation only and restricted to approximately 200 schools.

In addition to opening up the competition to a much larger and more diverse group of schools, this initiative represents another significant departure. “Most science education grants provide support for activities that are intended to immediately and directly benefit the students, such as undergraduate research experiences, or outreach activities for K-12 students and teachers,” said David Asai, senior director of undergraduate and graduate programs at HHMI. “The HHMI Inclusive Excellence initiative shifts the emphasis away from ‘fixing the students’ to improving the institution’s capacity for inclusion. We hope that this approach will ultimately benefit students through lasting changes in the school’s practices, policies, and culture.”

To better understand how schools can improve their capacity for inclusion, HHMI has engaged the Association of American Colleges & Universities (AAC&U) to convene an interdisciplinary team of national experts to critically examine the program award portfolio. A commission created by the AAC&U will conduct an ongoing evaluation of the outcomes of the Inclusive Excellence initiative and regularly disseminate its findings.

“AAC&U has a mission-level commitment to Inclusive Excellence and is proud to advance equity and inclusion in all colleges and universities and for students in all fields of study,” said AAC&U President Carol Geary Schneider. “I applaud the ambitious goals of the HHMI initiative—enabling schools to implement effective STEM teaching and learning practices and comprehensively meet their aspirations for inclusive excellence. Under Kelly Mack’s leadership, the IE Commission will be a valuable resource both to the schools in the project and to the larger higher education community. Its work will help all of higher education understand how to make lasting institutional changes that result in success for all students and in a more diverse and more effective national STEM enterprise.”

HHMI is now opening the second round of the Inclusive Excellence competition that will select 30 additional schools for awards to begin in September 2018. All awards will be for five years and total $1 million. Application details are available online. The intent-to-apply deadline for the 2018 competition is July 12, 2016.

The 2018 Inclusive Excellence competition is open to all four-year institutions that offer a baccalaureate degree in the natural sciences, are not-for-profit, and are accredited by their regional accrediting organization. Institutions that did not submit a pre-proposal or were not invited to submit a full proposal for the 2017 competition have the opportunity to submit a pre-proposal for the 2018 competition.

An eligible institution is limited to one pre-proposal in one of two categories:

The Howard Hughes Medical Institute plays a powerful role in advancing scientific research and education in the United States. Its scientists, located across the country and around the world, have made important discoveries that advance both human health and our fundamental understanding of biology. The Institute also aims to transform science education into a creative, interdisciplinary endeavor that reflects the excitement of real research.