The Howard Hughes Medical Institute has selected 39 new Gilliam fellows, exceptional doctoral students who have the potential to be leaders in their fields and the desire to advance diversity and inclusion in the sciences. 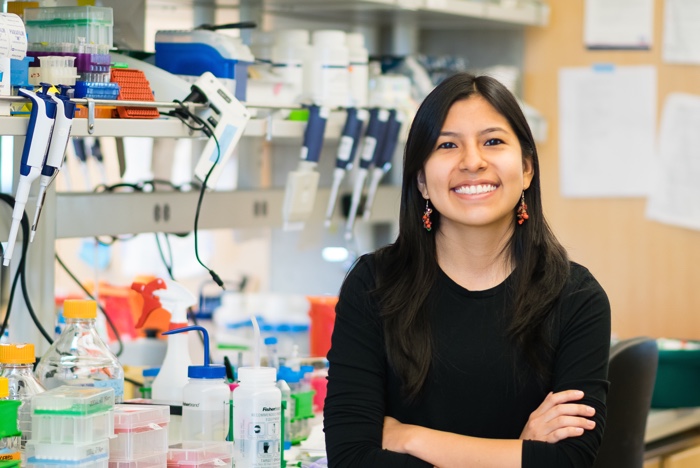 Born and raised in New York City, the daughter of Ecuadorian immigrants, Bermeo liked science in school, but she says, “I had no idea what a scientist was like.”

Now, she’s designing self-assembling proteins at the University of Washington and is one of 39 students awarded this year’s Gilliam Fellowships for Advanced Study. The awards, established by the Howard Hughes Medical Institute (HHMI), support exceptionally promising doctoral students motivated to pursue careers in academic science. The program’s ultimate goal is to prepare a diverse and highly-trained scientific workforce that can help develop the next generation of scientists.

“The Gilliam fellows are outstanding students who have the potential to be real leaders in science,” says David Asai, senior director for science education at HHMI. Each fellow will receive an annual award totaling $46,000, which includes a stipend, a training allowance, and an institutional allowance, for up to three years. But the Gilliam Fellowship is more than an award for graduate students, Asai says. It’s also an award for their thesis advisors.

As part of the fellowship, each student’s advisor will participate in a year of mentoring development activities, including online training and an in-person workshop at HHMI headquarters in Chevy Chase, Maryland. “The mentor’s job is to figure out how to help their student develop into an even better scientist,” Asai says. That can be especially challenging if students and mentors come from different racial or cultural backgrounds, he adds. Gilliam Fellowship mentor training is led by a trio of researchers who travel around the country teaching faculty how to mentor diverse students in science: Sherilynn Black of Duke University and Angela Byars-Winston and Christine Pfund of the University of Wisconsin.

"The Gilliam fellows are outstanding students who have the potential to be real leaders in science."

HHMI Investigator Leslie Vosshall, a geneticist at the Rockefeller University in New York City, attended HHMI’s training workshop in April, as a mentor to 2016 Gilliam Fellow Veronica Jove. In the beginning, Vosshall says, she doubted how useful mentor training would be. But now, she calls herself a convert. “I found it a really transformative and incredibly helpful experience.”

For Vosshall, the main take-away of the training was that mentors need to constantly put themselves in their students’ shoes. “Mentoring isn’t a one-size-fits-all interaction,” she says. “You have to be sensitive to how each student got to where they are today.” Vosshall has seen how the workshop’s exercises have had a lasting impact. “It’s changed the way that I mentor.”

That’s one of the goals of the Gilliam Fellowship, Asai says. Working with advisors can help hone their mentoring skills. Advisors can then help fellows navigate a scientific career path, and offer guidance to other students, too. It’s one way the award’s impact can reach beyond a given year’s fellows, explains Asai.

Effective mentoring is critical for building a diverse community of young scientists, he says. That may be especially true in computational biologist David Baker’s field, which has relatively few underrepresented minorities. Baker, an HHMI investigator and Bermeo’s mentor at the University of Washington, has been advising students for 24 years – but he’s looking forward to this year’s training, and to working with Bermeo.

“I think Sherry has everything it takes to become a top-notch investigator,” he says. “She’s learning by leaps and bounds every month.”

Bermeo, now entering her third year in graduate school, first came to Baker’s lab in 2014 as part of HHMI’s Exceptional Research Opportunities Program (EXROP), a 10-week research-based program that selects undergraduates from racial, ethnic, and other underrepresented groups in the sciences and places them in the labs of HHMI scientists. In Baker’s lab, she worked with a postdoctoral researcher on a project to design enzymes, proteins that speed up chemical reactions.

“I loved it so much,” she says. “What’s really exciting is that you can create proteins that don’t exist in nature — you just make them from scratch.”

Now, Bermeo is looking forward to sharing her scientific interests with others, including people from groups not often exposed to science. “Growing up, I didn't know anyone who was a scientist,” she says. “It wasn't until I went to college that I realized professors could get funded for tackling research projects that interested them.”

Bermeo says she’s grateful to be where she is today. As a Gilliam fellow, she’ll be able to go to talks and meetings, and promote diversity in science on her own campus. For instance, in 2018 she will attend a symposium, organized by the University of Washington’s Institute for Protein Design, aimed at providing strategies for making STEM environments more diverse and inclusive.

The Gilliam Fellowship was established in 2004 in honor of the late James H. Gilliam Jr., a charter Trustee of HHMI who spent his life fostering excellence and diversity in education and science. Since then, HHMI has provided more than $21 million to fund the program.

This year, HHMI received applications from 135 students, including 26 from EXROP alumni.

The applicant pool consists of EXROP alumni, and graduate students nominated by the program directors of non-MSTP T32 training grants and the INBRE grants awarded through the National Institute of General Medical Sciences (NIGMS). To be eligible, applicants must be enrolled in their second or third year of a PhD program in the life sciences, and not in an MD/PhD program. Applicants must be from racial, ethnic and other underrepresented groups in the sciences, including those from disadvantaged backgrounds, must aspire to careers in academic science, and must demonstrate a commitment to the advancement of diversity and inclusion in the sciences.

The new 2017 Gilliam fellows, their institutions, and advisors are: