HHMI selects 37 research universities to receive $60 million in grants to improve how science is taught.

The Howard Hughes Medical Institute (HHMI) announced today that it has selected 37 research universities to receive $60 million in grants to improve how science is taught. The initiative enables the schools to focus on significant and sustained improvement in retaining students in the science, technology, engineering and mathematics (STEM) disciplines. 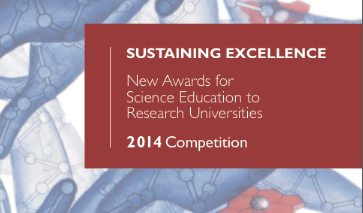 “Our nation’s research universities are absolutely critical to sustaining our scientific excellence,” said HHMI President Robert Tjian. “Simply put, we are challenging these universities to focus their attention on improving science education so that a greater number of talented students remain in science.”

Each school will receive a five-year grant that ranges between $1.2-$2.4 million. The finalists were selected after three rounds of peer review from among 170 applications submitted.

Every year, about three million students enter college. According to the Higher Education Research Institute of UCLA, nearly 40 percent of entering students intend to study science and engineering. Unfortunately, about 60 percent of students who enter college with the intention of majoring in a STEM field fail to earn a STEM degree. Even more concerning because of the rapidly changing racial demographics of the nation’s talent pool, only about 20 percent of students from underrepresented ethnic groups persist in STEM studies.

Despite these impressive statistics, most universities have not done enough to adapt their operating models when it comes to teaching science. “We know that most of the attrition occurs in the first two years of college, when students are taking introductory “gateway” courses in chemistry, math and biology,” said Sean B. Carroll, vice president for science education at HHMI “For some students, the introductory courses are their only exposure to science. The widespread failure of institutions to deliver engaging and effective introductory science is a problem not only for future scientists, but also for all students, regardless of their eventual career path.”

Set against this backdrop, HHMI challenged research universities in 2013 to develop effective strategies that will lead to significant and sustained improvement in the persistence in science by all students, including those students who belong to groups underrepresented in science.

The new HHMI initiative focuses on improvement in three broad categories, all of which are addressed in the 2012 “Engage to Excel” report issued by the President’s Council of Advisors on Science and Technology:

The new grants to the 37 research universities will support activities in four thematic areas:

The development of learning communities will improve interactions between and among students and faculty, which will impact the institutional climate and culture. Activities include those designed to support (i) students in the areas of engagement, enthusiasm, math competency, foundational science, self-efficacy, and science identity, (ii) faculty in mentoring, advising, teaching, instruction, and collaborations, and (iii) student-faculty interactions, relationships, and perceptions. These activities support all student populations, especially introductory-level, non-traditional, transfer, at-risk and underrepresented students.

HHMI grants will support the adaptation and implementation of the FRI program originally developed at the University of Texas at Austin. Students work in research streams under the guidance of their faculty and graduate student mentors in teams, and individual students can have their own independent projects with the potential to publish their work. UT Austin will be expanding its program to accommodate transfer students.

Since 1988, the Howard Hughes Medical Institute (HHMI) has awarded more than $935 million in grants to 274 public and private colleges and universities to support science education in the United States. Those grants have generally been awarded through two separate but complementary efforts, one aimed at undergraduate-focused institutions and the other at research universities. HHMI support has enabled more than 92,000 students nationwide to work in research labs and developed programs that have helped 109,000 K-12 teachers learn how to teach science more effectively.

HHMI’s approach to these science education grants differs from that of many other organizations, including the federal government, because its awards are made at an institutional level and not to individuals. As a result, a single HHMI grant can support a diverse spectrum of educational activities. HHMI requires science faculty and administrators at research universities to work together to develop a common educational goal for programs or initiatives in their grant proposal—something they might not do otherwise.

The Howard Hughes Medical Institute plays an influential role in advancing scientific research and education in the United States. Its scientists, located across the United States, have made important discoveries that advance our fundamental understanding of biology and its relation to human disease. In a complementary program at HHMI's Janelia Research Campus in Loudoun County, Virginia, leading scientists are pursuing long-term, high-risk, high-reward research in a campus designed to bring together researchers from disparate disciplines. The Institute also aims to transform science education into a creative, interdisciplinary endeavor that reflects the excitement of real research. For more information, visit www.hhmi.org.

The Institute’s endowment at the close of fiscal 2013 was about $16.9 billion. HHMI’s headquarters are located in Chevy Chase, Maryland, just outside Washington, D.C.