HHMI's third competition for the Inclusive Excellence initiative will award grants to up to 30 schools to help increase their capacity to include students of diverse backgrounds in science.

The Howard Hughes Medical Institute (HHMI) is now announcing a third round of its Inclusive Excellence initiative (IE3) to promote diversity and inclusion in science education.

The grant program challenges colleges and universities to work with faculty to examine and change campus cultures so that a diverse group of students feel included in science. More than 1,400 institutions are eligible to compete, and HHMI expects to award grants to up to 30 more schools, with $1 million provided to each over five years.

“These grants are helping schools build their capacity for inclusion,” says David Asai, HHMI’s senior director for science education. That’s key for fostering an environment that supports students from all backgrounds, he says, including transfer students, people who are the first in their family to attend college, and those from underrepresented racial, ethnic, and socioeconomic groups.

People from these groups are just as interested in studying science as are their peers, Asai says, but many of them don’t stick with it. That’s a problem, he says, because, “creativity and innovation emerge from divergent perspectives.” A diverse group of thinkers and problem solvers could offer incredible benefits to science – and to our nation, Asai adds. HHMI asks Inclusive Excellence schools to identify institutional barriers that prevent students from staying in science.

HHMI’s Inclusive Excellence initiative awarded its first grants in 2017 to 24 schools. A year later, HHMI selected 33 additional schools for the program. The 57 grantee schools have now each embarked on their own experiments, Asai says, and they’re taking different approaches to dismantling barriers to inclusion on campus. “Institutional change is more than theoretical,” Asai says. “It means changing behaviors and policies.” For example, he says, changing the rules at the registrar’s office could help students navigate the transition between community college and the four-year university.

Some schools are educating faculty about racism and biases, or redesigning curricula so that a broader swath of students can participate in research experiences. Others are revising the policies governing faculty promotion and tenure to include evidence of effective contributions to inclusion. All have committed to becoming part of a learning community that engages in the process of inclusive excellence, Asai says. That process includes self-reflection, experimentation, sharing what they’re learning, and listening to and supporting one another. 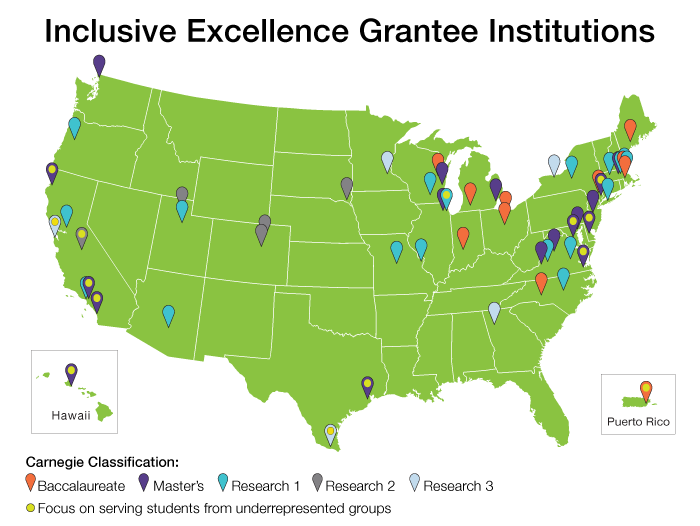 Asai’s team has built upon what they’ve learned from the Inclusive Excellence community to shape the third competition. Faculty are a critical part of this process, he says, and will have to learn the skills needed to create a more inclusive environment. “Everything begins with faculty buy-in,” Asai says. In addition to the emphasis on faculty development, in IE3, each school will choose to focus on one of three challenges: evaluating effective and inclusive teaching, improving the introductory science experience, and forming effective partnerships between two- and four-year institutions. Schools will develop a “theory of change,” or a roadmap, for how they’ll translate the grant-supported activities into lasting change at their institutions.

The Association of American Colleges and Universities has created an Inclusive Excellence Commission, which is evaluating the outcomes of this national experiment and helping to disseminate what is being learned.

To apply for an Inclusive Excellence grant, schools must first submit their intent to apply. Eligible schools will then submit a pre-proposal that describes their inclusivity goals, selects one of the three challenges, and gauges the readiness of the school to participate in the initiative. HHMI will select finalists, who will participate in a workshop at HHMI, where they will work in groups to discuss one another’s ideas and then submit full proposals. More information about the initiative and how to join the new competition can be found at https://www.hhmi.org/IE.

The Howard Hughes Medical Institute plays a powerful role in advancing scientific research and education in the United States. Its scientists, located across the country and around the world, have made important discoveries that advance both human health and our fundamental understanding of biology. The Institute also aims to transform science education into a creative, interdisciplinary endeavor that reflects the excitement of real research. HHMI’s headquarters are located in Chevy Chase, Maryland, just outside Washington, DC.