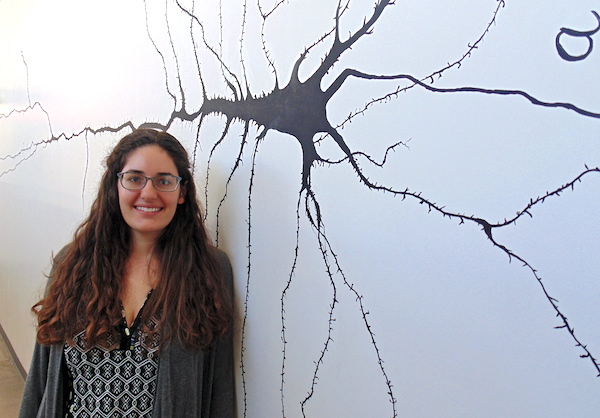 The Howard Hughes Medical Institute (HHMI) has selected 34 exceptional students who are pursuing PhDs in the life sciences to receive this year’s Gilliam Fellowships for Advanced Study, a program aimed at increasing diversity in the scientific workforce.

"The Gilliam Fellows are outstanding young scientists who have expressed a clear commitment to advancing diversity among scientists," said David Asai, senior director of science education. "Their potential for scientific leadership is enormous, and the program emphasizes the professional development of the students and their thesis advisers."

The fellowships provide full support to promising doctoral students from groups traditionally underrepresented in the sciences. Each fellow will receive an annual award totaling $46,000, which includes a stipend, a training allowance, and an institutional allowance, for up to three years.

One of the newly minted fellows, Emily Sales, just completed the second year of her PhD studies at the University of Oregon. Sales said she believes the award will help her become a more effective researcher and empower her to contribute her unique perspective to the neuroscience field.

“I decided to go into research to develop treatments for neurological diseases, which are a burden on patients, their families, and society as a whole,” said Sales. “The Gilliam award will support my investigation into the molecular mechanisms involved in the assembly of neural circuits in the fruit fly, which may provide a foundation to build treatments for human neurological diseases.”

In addition to receiving support for advanced studies, Gilliam Fellows also attend meetings with HHMI scientists and receive intensive mentoring from their advisors.

Sales’ mentor will be Chris Doe, an HHMI investigator at the University of Oregon. Doe, who has been mentoring underrepresented minority (URM) students throughout his 27-year teaching career, said he is very excited at the opportunity to mentor a Gilliam Fellow.

“My goal will be to work with Emily to help her achieve her specific goals,” he said. “One ‘Emily-specific’ goal I’ll have is to encourage her interest in mentoring younger URM students.”

Sales said she is eager to learn from Doe’s extensive mentoring experience. “This fellowship will enable me to develop and implement outreach activities to encourage the future scientists in my community.”

Doe also wants to provide Sales with individual support and real-time feedback on her scientific project. He said he wants his students to know that some experiments fail, and that failure is expected and necessary for their training.

“I want to encourage Emily when she is struggling and when she is celebrating her successes. I want to connect her with the right people in my lab and university to give her the appropriate technical training,” he said.

Effective mentoring is an important skill, and the Gilliam Fellows program engages the Fellows’ thesis advisers in a series of professional development activities aimed at enhancing their skills and strategies of effective mentoring, including working with trainees from different cultural backgrounds. As part of this work, mentors will join their students at the annual Gilliam Fellows meeting at HHMI.

The fellowships were established in 2004 in honor of the late James H. Gilliam Jr., a charter Trustee of HHMI who spent his life fostering excellence and diversity in education and science. Since then, HHMI has provided more than $16 million to fund the Gilliam program. The program’s goal is to ensure that a diverse and highly trained workforce is available to assume leadership roles in science, including college and university faculty who have the responsibility to develop the next generation of scientists.

The applicant pool consists of graduate students nominated by the principal investigators of non-MSTP T32 training grants awarded through the National Institute of General Medical Sciences (NIGMS), and alumni of HHMI’s Exceptional Research Opportunities Program (EXROP), an initiative that provides undergraduate minority students with the opportunity to conduct research under the mentorship of HHMI scientists.

Since EXROP began in 2003, HHMI has supported 867 students from 170 colleges and universities in the labs of 230 HHMI scientists. Of the 506 EXROP alumni who have completed the baccalaureate degree, 98 percent are still involved in the sciences – teaching, working in a research lab, or pursuing advanced degrees.

To be eligible, applicants must be enrolled in their second or third year of a PhD program in the life sciences, but cannot be enrolled in an MD/PhD program. In addition, applicants must be from racial, ethnic and other underrepresented groups in the sciences, including those from disadvantaged backgrounds, and they must be committed to the advancement of diversity and inclusion in the sciences.

HHMI received applications from 142 students this year, including 18 from EXROP alumni. The new 2016 Gilliam fellows, their institutions, and advisors are:

The Howard Hughes Medical Institute plays an important role in advancing scientific research and education in the United States. Its scientists, located across the country and around the world, have made important discoveries that advance both human health and our fundamental understanding of biology. The Institute also aims to transform science education into a creative, interdisciplinary endeavor that reflects the excitement of real research. HHMI's headquarters are located in Chevy Chase, Maryland, just outside Washington, D.C.