In one of the first successful attempts at genetically engineering mosquitoes, researchers have altered the way the insects respond to odors, including the smell of humans and the insect repellant DEET. 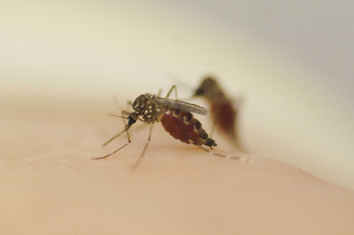 In one of the first successful attempts at genetically engineering mosquitoes, HHMI researchers have altered the way the insects respond to odors, including the smell of humans and the insect repellant DEET. The research not only demonstrates that mosquitoes can be genetically altered using the latest research techniques, but paves the way to understanding why the insect is so attracted to humans, and how to block that attraction.

“The time has come now to do genetics in these important disease-vector insects. I think our new work is a great example that you can do it,” says Leslie Vosshall, an HHMI investigator at The Rockefeller University who led the new research, published May 29, 2013 in the journal Nature.

By disrupting a single gene, we can fundamentally confuse the mosquito from its task of seeking humans.

In 2007, scientists announced the completion of the full genome sequence of Aedes aegypti, the mosquito that transmits dengue and yellow fever. A year later, when Vosshall became an HHMI investigator, she shifted the focus of her lab from Drosophila flies to mosquitoes with the specific goal of genetically engineering the insects. Studying mosquitoes appealed to her because of their importance as disease carriers, as well as their unique attraction to humans.

Vosshall’s first target: a gene called orco, which her lab had deleted in genetically engineered flies 10 years earlier. “We knew this gene was important for flies to be able to respond to the odors they respond to,” says Vosshall. “And we had some hints that mosquitoes interact with smells in their environment, so it was a good bet that something would interact with orco in mosquitoes.”

Vosshall’s team turned to a genetic engineering tool called zinc-finger nucleases to specifically mutate theorco gene in Aedes aegypti. They injected the targeted zinc-finger nucleases into mosquito embryos, waited for them to mature, identified mutant individuals, and generated mutant strains that allowed them to study the role of orco in mosquito biology. The engineered mosquitoes showed diminished activity in neurons linked to odor-sensing. Then, behavioral tests revealed more changes.

When given a choice between a human and any other animal, normal Aedes aegypti will reliably buzz toward the human. But the mosquitoes with orco mutations showed reduced preference for the smell of humans over guinea pigs, even in the presence of carbon dioxide, which is thought to help mosquitoes respond to human scent. “By disrupting a single gene, we can fundamentally confuse the mosquito from its task of seeking humans,” says Vosshall. But they don’t yet know whether the confusion stems from an inability to sense a “bad” smell coming from the guinea pig, a “good” smell from the human, or both.

Next, the team tested whether the mosquitoes with orcomutations responded differently to DEET. When exposed to two human arms—one slathered in a solution containing 10 percent DEET, the active ingredient in many bug repellants, and the other untreated—the mosquitoes flew equally toward both arms, suggesting they couldn’t smell the DEET. But once they landed on the arms, they quickly flew away from the DEET-covered one. “This tells us that there are two totally different mechanisms that mosquitoes are using to sense DEET,” explains Vosshall. “One is what’s happening in the air, and the other only comes into action when the mosquito is touching the skin.” Such dual mechanisms had been discussed but had never been shown before.

Vosshall and her collaborators next want to study in more detail how the orco protein interacts with the mosquitoes’ odorant receptors to allow the insects to sense smells. “We want to know what it is about these mosquitoes that makes them so specialized for humans,” she says. “And if we can also provide insights into how existing repellants are working, then we can start having some ideas about what a next-generation repellant would look like.”