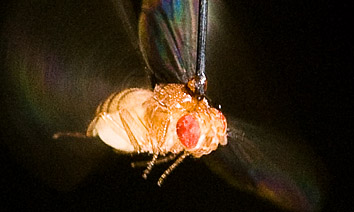 If a fruit fly gets a whiff of a rotting banana, it does everything it can to get to the location of the potential feast. That includes not only beating its wings faster, but overriding its normally random flight navigation with a more direct approach, new research has found.

In a study published October 19, 2011 in the Journal of Neuroscience, Howard Hughes Medical Institute early career scientist Mark A. Frye and colleagues have found that fruit flies integrate smell and visual information in one particular area of its brain to fine-tune flying behavior. Understanding the brain circuits that let flies integrate two senses to control behavior can help scientists understand how humans process different pieces of sensory information at once as well.

As the fly is happily controlling its world, all of a sudden we can jitter the image around and the fly reacts quickly and tries to stabilize it.

Frye explains that for humans, “information from all our senses is constantly changing how we perceive the world.” When you walk into a dark room, for example, your tactile senses are suddenly aroused and your hearing is heightened, he says. While the kinds of cues that matter to a fruit fly may be distinct from what humans pay attention to, they too must integrate information from various senses so that they can interact appropriately with their environment.

“Flies have extremely strong visual reflexes,” explains Frye, “This helps them maintain stability and avoid crashing into things when they’re flying.” But sticking to one flight path all the time doesn’t help a fly find new food sources. That requires some degree of randomness, so the fly ends up in new places, Frye points out. He and his colleagues at the University of California, Los Angeles thought that a fly’s acute sense of smell might be involved in switching between what he calls random-searching flight and directed-tracking flight.

“We wanted to know how fly can maintain stable flight, but also have variability in order to explore new environments and search out new sources of odor,” says Frye.

To answer the question, Frye uses a high-tech flight arena in which scientists could track a fly’s every motion, as well as control the surrounding environment—a sort of circular high definition television arena. Then they tethered a fly inside the arena on the end of a steel pin and tracked its wing beats. As the insect flew inside the arena, it remained in place. But the image on the arena’s walls changed—if the fly turned to the left, for example, the image on the screen would rotate correspondingly. Then, to test the fly’s flight reflexes, the scientists would shift the image slightly in an unexpected direction.

“As the fly is happily controlling its world, all of a sudden we can jitter the image around and the fly reacts quickly and tries to stabilize it,” explains Frye.

In the absence of any scent, the fly’s reaction to its shifted worldview was relatively minor. However, when the researchers added the smell of food to the arena, the fly’s reaction to the jitters in the image became much more pronounced. The fly more strongly corrected its path to remain in the direction it had been traveling. This suggests that a fly normally has some variability in its searching flight path, ignoring the visual world to some extent, says Frye. But when it smells food, it starts sticking to the visual path that will take it to its next meal.

To find out what part of the fly’s brain integrates odors with visual information, Frye and his colleagues used chemicals that could selectively stop cells from developing in certain parts of the brain, or genetic tricks to silence the circuits. When they blocked a region called the mushroom body, the flies no longer changed their visual flight patterns when food odors were piped into the arena. Tests confirmed that the flies still had a sense of smell, Frye says. But that sense of smell no longer influenced flies’ visual responses.

The mushroom body has been implicated in processing smells in other organisms. But it’s been most commonly association with learning and remembering smells. Flies, which never return to where they are born or to a home base, have less of a need for this learning. So it’s not surprising, Frye says, that the mushroom body has more diverse functions in flies.

“This new data should provoke some reinterpretation of the mushroom body,” says Frye. “It is certainly a center of complex odor perception, but not only for learning.”