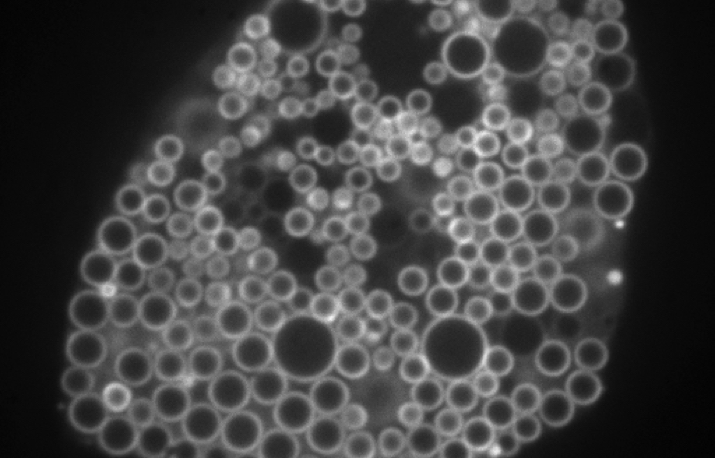 In suspense novels, the most unassuming character sometimes turns out to be a mastermind, influencing events without attracting attention. That same storyline may be afoot in cells as well: an unglamorous fat-storing droplet appears to have a surprise role in controlling gene activity.

“For many years, people thought that fat stored in cells was some sort of enormous glob that just sits there and doesn’t do much,” says Walther, a cell biologist at Harvard University.

His team’s new study topples that idea, establishing seemingly simple fat droplets as key regulators in the complex process of metabolism. Understanding all the links in that chain of command could help researchers understand the origins of diseases like atherosclerosis, fatty liver disease, or insulin resistance.

Cells use lipids, a kind of fatty molecule, to store energy. Excess fat resides in cellular packets called lipid droplets. In recent years, scientists have noticed that these droplets interact with molecules involved in metabolism, but the picture remains incomplete. “Here’s this universal process, and we just don’t understand anything about the genes and the proteins that govern it,” says study coauthor Robert Farese Jr. Walther and Farese, who operate a joint laboratory, set out to identify all the genes coordinating fat storage.

They screened for relevant human genes in white blood cells called macrophages, which store different types of fat. One macrophage gene the team identified surprised them. The gene, called MLX, encodes a type of protein that generally acts in the nucleus – far away from lipid droplets in the cell.

If MLX influenced lipid metabolism, Walther reasoned, it would probably do so indirectly, by cranking up activity of other genes. But Niklas Mejhert, a postdoc in Walther and Farese’s lab, discovered that MLX could bind to the droplets directly. That was a startling observation, Walther says. “These proteins work on DNA, so what on earth do they have to do on lipid droplets?”

If MLX is physically stuck to the droplets, the team found, the protein stays trapped outside the nucleus. There, MLX can’t do its usual job – which includes telling cells to make proteins that burn sugar for energy. Instead, perhaps, cells might burn fat stored in the droplets.

Like a molecular safety valve, the system may prevent cells from becoming overfilled with fat. Too much stored cellular fat can lead to the metabolic diseases that afflict millions of Americans, Farese says. “Do abnormalities of this system somehow underlie that disease process?”

In addition to MLX and its relatives, the team’s genetic screen surfaced over 500 genes that may participate in fat storage. “We see that as a virtual treasure trove,” Farese says. The researchers are now working on a website to catalog these genes, so other labs can dive in and explore.