Evolution Is Not a Two-Way Street

In evolution, proteins can’t go home again—at least not by their original route. 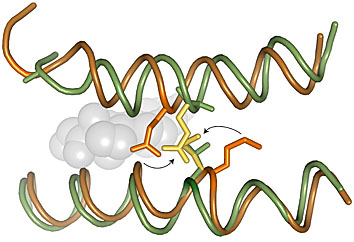 New research demonstrates that in evolution, proteins can’t go home again—at least not by their original route. Scientists have long debated whether natural selection could loop back on itself, allowing an organism to revert to its ancestral form. Now, by analyzing the molecular evolution of a hormone receptor found in virtually all vertebrates—the glucocorticoid receptor (GR)—Howard Hughes Medical Institute researchers have concluded that protein evolution is irreversible.

Joseph W. Thornton, a Howard Hughes Medical Institute (HHMI) early career scientist at the University of Oregon who led the study, says the results suggest that evolution acts as an “epistatic ratchet”—meaning the molecular tinkering that leads to new features in an organism turns, like all ratchets, in only one direction.

Thornton and his colleagues, Jamie Bridgham of the University of Oregon and Eric Ortlund of Emory University, published their study in the September 24, 2009, issue of the journal Nature.

The human GR makes us exquisitely sensitive to the steroid hormone cortisol, which regulates our response to long-term stress, including changes in metabolism, immune defenses, and even aspects of memory formation in the brain.

GR is the sister gene of a very similar hormone receptor, the mineralocorticoid receptor (MR), which responds to different hormones to regulate salt levels in the body, controlling blood pressure and cardiovascular health. GR and MR genes are duplicates of a single ancestral gene that last existed more than 450 million years ago in an ancient vertebrate. The ancient protein encoded by that gene (AncCR, for ancestral corticoid receptor) was a less discriminating molecule than the modern GR, says Thornton, and could be activated by both cortisol and mineralocorticoids.

Our work. . . implies that the biology we have today is just one of many possible rolls of the evolutionary dice.

Thornton can speak so authoritatively about this ancient protein because he has it in his lab’s freezer. His research group “resurrected” the AncCR by combining computational analysis of gene sequences with biochemical methods for synthesizing DNA and expressing proteins. First, Thornton determined the sequence of the ancestral gene by analyzing the receptor sequences of hundreds of modern vertebrates using a bioinformatics method called maximum likelihood phylogenetic analysis. Working his way back down the gene’s family tree, he identified the signature genetic changes where intermediary forms of the receptor branched off and followed the most likely conserved genetic sequence all the way back to the earliest common ancestor.

With the probable AncCR sequence in hand, Thornton’s research group synthesized the gene from scratch and expressed the ancient protein in cells grown in the laboratory. They then used cutting-edge techniques to characterize the structure and function of the receptor—tearing it apart and rearranging it to see how it folds into a functional protein and what hormones regulate its activity.

Once he knew that the GR’s ancestor responded to a wide range of hormones, Thornton wanted to determine precisely how and when the modern protein’s unique sensitivity to cortisol evolved. Moving up the phylogenic tree from the duplication that produced the GR lineage, his group resurrected additional ancestral receptors. They identified the very last one that functioned like AncCR and the first one to work like a modern GR. Thornton calls those ancient receptors AncGR1 and AncGR2. AncGR1 existed about 450 million years ago in the ancestor of all jawed vertebrates. “That’s the last common ancestor of you and a shark,” Thornton says. AncGR2 represents the GR about 40 million years later in the ancestor of all vertebrates with bones—“the last common ancestor of you and a salmon,” he says.

Thornton found his “epistatic ratchet’ in that 40-million-year gap. His first step was to identify the mutations that caused AncGR2 to evolve its new function during that interval. He found that seven historical amino acid changes, when introduced into AncGR1 by DNA engineering, were sufficient to recapitulate the evolution of cortisol specificity. His group also determined the order in which the seven mutations had to have occurred to make the receptor more sensitive to cortisol, while preserving the function of intermediate forms of the receptor.

But when the team’s experiments began to go backward in evolutionary time, they hit an unexpected evolutionary brick wall. When Bridgham, a research scientist in Thornton’s laboratory, manipulated AncGR2 to reverse the seven key mutations, she could not recreate a receptor with the more general function of AncGR1. Surprisingly, the ancestral states at these mutation sites had become lethal, yielding a non-functional protein that would not respond to any hormones. Changing the order of reversed mutations led nowhere, which led Thornton to the concept of the epistatic ratchet. “During evolution, the conditions that facilitated the evolution of past states are destroyed as new states are realized,” he explained.

To determine why evolution had become irreversible, Thornton looked to the other mutations that had occurred between AncGR1 and AncGR2. Ortlund, his collaborator, determined the atomic structures of the resurrected proteins using X-ray crystallography. By comparing the two structures, Thornton’s group identified five additional mutations in AncGR2 which would cause clashes between atoms, destabilizing the protein and making it unable to function properly, if the rest of the structure were returned to its ancestral state. And indeed, once these five mutations were set back to their ancestral states, the protein could then tolerate reversal of the seven key mutations, yielding a protein with the ancestor’s broad sensitivity. When introduced into AncGR1 in the forward direction, however, the five “restrictive” mutations had virtually no impact on the protein’s function.

Based on these experiments, protein evolution seems irreversible, says Thornton. Although the five restrictive mutations must be reversed before the seven key mutations, reversing those five alone either destroys the receptor’s function or has no effect, depending on the order in which they are introduced. Backward evolution would therefore require at least five initial steps that natural selection would be powerless to drive. Instead, Thornton says, selection would have to drive the protein to some adaptive state different from its past.

As an organism moves forward in evolutionary time and adapts to new opportunities or threats, a host of random genetic mutations cause subtle changes to the structures of its proteins. Some of these rearrangements, like those Thornton studied, are “restrictive” in blocking the path back to older states, while others are “permissive,” opening up paths to new functions that were previously inaccessible. The process is incremental, mutation after mutation, but cumulative in that once a new organism “works,” the restrictive mutations can’t be undone without crashing the chain. The evolutionary bridge back to earlier states gets burned.

Thornton points out that his epistatic ratchet touches on the hotly debated question of whether evolution is driven by contingency or by determination. That is the granddaddy of all evolutionary arguments—was the evolution of Homo sapiens an inevitable outcome or a happy accident?

Thornton believes that the epistatic ratchet concept he observed in glucocorticoid receptor evolution supports the argument for contingency. “Our work suggests that the outcomes of evolution depend crucially on low-probability chance eventson where an evolutionary trajectory starts and where it happens to wander along the way,” Thornton says. “It implies that the biology we have today is just one of many possible rolls of the evolutionary dice.”