Multiple jury prizes were awarded in recognition of contributions advancing technology to automate an important but tedious component of neuroscience research. 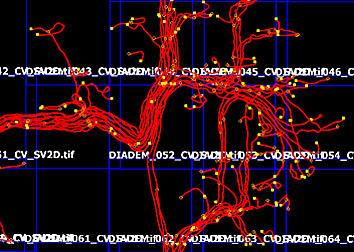 Computer scientists and experimental neuroscientists are celebrating a new generation of computational tools to trace the complex, branching shapes of neurons up to 10 times faster than the painstaking manual work the task has usually demanded. The new algorithms were designed by scientists competing in the DIADEM Challenge, a scientific competition that concluded yesterday at the Howard Hughes Medical Institute’s Janelia Farm Research Campus.

Five teams of algorithm developers vied against each other in the final, tournament-style conclusion to the competition. The judges commended each of the teams for developing original and creative ideas that would help in solving the difficult problem of automated image reconstruction, and $75,000 in prize money was distributed among four teams.

Although high-level, “zoomed out” maps of the brain have been around for quite some time, researchers have made very slow progress in mapping out the finest details of neural connectivity. That lack of momentum has created a critical bottleneck and stymied ambitious efforts to create a functional atlas of the brain.

We hope that we are seeing the light at the end of the tunnel in terms of the beginning of the end of manual reconstruction of neurons.

The DIADEM Challenge—short for Digital Reconstruction of Axonal and Dendritic Morphology—was the brainchild of scientists who had gathered at a 2007 scientific conference at Janelia Farm. As they compared notes at a brainstorming session after the meeting, it became clear that progress in understanding neural circuits was being slowed by the tedious task of tracing the structure of individual nerve cells by hand. Giorgio A. Ascoli, a neuroscientist at George Mason University, proposed holding a competition that would encourage innovative solutions to this frustrating problem.

The international scientific contest launched in April 2009 and was organized by the Allen Institute for Brain Science, the Howard Hughes Medical Institute (HHMI), and the Krasnow Institute for Advanced Study at George Mason University. From the outset, organizers set a high bar for algorithm performance: to merit a grand prize, a successful computational approach should accurately trace neuronal morphology at least 20 times faster than scientists could accomplish the same task by hand.

Ascoli acknowledged that this was a demanding challenge for developers. At the same time, he said, it is important to recognize that “this is only the first step towards the actual goal. If we’re serious about automation at the brain level, we need a 20,000-fold speed up.” Thus, he said, the DIADEM challenge was intended to set the necessary developmental efforts in motion. “Once the first brick comes down, the whole building might follow soon.”

The ambitious, “hard threshold” of speeding image reconstruction 20-fold was not met during the DIADEM Challenge, Ascoli said during the award presentation. Nonetheless, the international panel of judges expressed “shock and disbelief at the sheer advancements that the algorithms and their developers have achieved.”

Teams received the following commendations from the DIADEM jury, along with the indicated prizes:

Badrinath Roysam Team, $25,000
“for the better overall generality of their program in producing robust reconstructions by integration of human and machines interactions.”

Armen Stepanyants Team, $25,000
“for the better overall biological results in the spirit of pure automation.”

Eugene Myers Team, $15,000
“for the excellent quality and strength of their algorithm.”

Deniz Erdogmus Team
“for elevating themselves above the current state of automated reconstructions…with a deep understanding of the technical and scientific problems.”

More than 100 teams registered to participate in the DIADEM Challenge, which was open to individuals and teams from the private sector and academic laboratories. Competitors had one year to implement an algorithm for digital reconstruction of neuronal morphology and to test it against manual reconstruction, which is the current “gold standard.” The five finalists were selected based on the recommendations of an international panel of experts, who evaluated the submissions using a comprehensive battery of quantitative metrics and qualitative evaluations.

The tournament format of the competition’s final round brought competitors together with neuroscientists, whose real data was used to put the reconstruction algorithms to the test. In six editing sessions, each competitor worked with each team of data owners to achieve the most satisfactory solution to six different imaging problems. Teams were evaluated on the speed and accuracy of reconstruction, as well as how much time was required for hands-on editing of reconstructed images.

Even with the advent of computer technology that enables mapping in three dimensions, the full reconstruction of single neurons may still take months. The vast majority of axons (the long neuronal projections that transmit information to neighboring cells) and dendrites (the branches on nerve cells that receive information from neighboring cells) must be traced manually. Researchers trace axons and dendrites that have been labeled with markers, such as green fluorescent protein, and imaged using a variety of microscopy techniques. Many scientists who attended the DIADEM Challenge, either as participants or judges, openly commiserated about the inefficiency of manual reconstruction techniques.

The various computational strategies presented by each of the finalists will each help bring neuroscientists closer to eliminating this tedious task – allowing them to conduct larger studies and collect more data, or to focus on less technical aspects of their research. Challenge participants shared enthusiasm that the new slate of tools emerging from DIADEM would encourage further development and improvement in their own labs and others.

“We hope that we are seeing the light at the end of the tunnel in terms of the beginning of the end of manual reconstruction of neurons,” said Ascoli at the outset of the competition.

The National Institutes of Health provided partial support to a scientific conference that is independent of—but held in conjunction with—the final round of the DIADEM Challenge. The conference helped bring neuroscientists and computational scientists together to discuss potential solutions to the scientific challenges in the field of digital reconstruction and identify future research directions and opportunities. Yuan Liu, program director for Computational Neuroscience and Neuroinformatics at the National Institute of Neurological Disorders and Stroke, is co-organized the scientific conference with Ascoli and Karel Svoboda, a group leader at Janelia Farm.

Full details about the DIADEM Challenge can be found at www.diademchallenge.org.

The five teams of finalists that competed in the Diadem Tournament were:

Allen Institute for Brain Science
Launched in 2003, the Seattle-based Allen Institute for Brain Science is an independent, 501(c)(3) nonprofit medical research organization dedicated to advancing brain research. Started with $100 million in seed money from philanthropist Paul G. Allen, the Institute takes on projects at the leading edge of science—far-reaching projects at the intersection of biology and technology. The resulting data create publicly available resources that fuel discovery for countless other researchers worldwide. The Institute’s data, tools and resources are publicly available on the Web at www.alleninstitute.org.

Howard Hughes Medical Institute
The Howard Hughes Medical Institute, a nonprofit medical research organization that ranks as one of the nation's largest philanthropies, plays a powerful role in advancing biomedical research and science education in the United States. HHMI's principal mission is conducting basic biomedical research, which it carries out in collaboration with more than 60 universities, medical centers, and other research institutions throughout the United States. Approximately 350 HHMI investigators, along with a scientific staff of more than 2,000, work at these institutions in Hughes laboratories. In a complementary program at HHMI's Janelia Farm Research Campus in Loudoun County, Virginia, leading scientists are pursuing long-term, high-risk, high-reward research in a campus specially designed to bring together researchers from disparate disciplines. HHMI researchers are widely recognized for their creativity and productivity: 124 HHMI investigators are members of the National Academy of Sciences, and there are currently 13 Nobel laureates within the investigator community. The Institute also has a philanthropic grants program that emphasizes initiatives with the power to transform graduate and undergraduate education in the life sciences. To learn more about the Howard Hughes Medical Institute and the Janelia Farm Research Campus, visit www.hhmi.org.

Krasnow Institute for Advanced Study at George Mason University
The Krasnow Institute seeks to expand understanding of mind, brain, and intelligence by conducting research at the intersection of the separate fields of cognitive psychology, neurobiology, and the computer-driven study of artificial intelligence and complex adaptive systems. These separate disciplines increasingly overlap and promise progressively deeper insight into human thought processes. The Institute also examines how new insights from cognitive science research can be applied for human benefit in the areas of mental health, neurological disease, education, and computer design.

Named the number one national university to watch by U.S. News & World Report, George Mason University is an innovative, entrepreneurial institution with global distinction in a range of academic fields. Located in the heart of Northern Virginia’s technology corridor near Washington, D.C., Mason prepares its students to succeed in the work force and meet the needs of the region and the world. With strong undergraduate and graduate degree programs in engineering and information technology, dance, organization psychology and health care, Mason students are routinely recognized with national and international scholarships. Mason professors conduct ground-breaking research in such areas as climate change, information technology, and the biosciences, and Mason’s Center for the Arts brings world-renowned artists, musicians, and actors to its stage.

To learn more about the Krasnow Institute for Advanced Study and George Mason University, visit krasnow.gmu.edu and www.gmu.edu.

National Institutes of Health
The National Institutes of Health (NIH), a part of the U.S. Department of Health and Human Services, is the primary Federal agency for conducting and supporting medical research. Helping to lead the way toward important medical discoveries that improve people's health and save lives, NIH scientists investigate ways to prevent disease as well as the causes, treatments, and even cures for common and rare diseases. Composed of 27 Institutes and Centers, the NIH provides leadership and financial support to researchers in every state and throughout the world.

For over a century, the National Institutes of Health has played an important role in improving the health of the nation. The NIH traces its roots to 1887 with the creation of the Laboratory of Hygiene at the Marine Hospital in Staten Island, NY. The NIH is an agency of the U.S. Department of Health and Human Services. With the headquarters in Bethesda, Maryland, the NIH has more than 18,000 employees on the main campus and at satellite sites across the country. With the support of the American people, the NIH annually invests over $30.6 billion in medical research. More than 83 percent of the NIH's funding is awarded through almost 50,000 competitive grants to more than 325,000 researchers at over 3,000 universities, medical schools, and other research institutions in every state and around the world. About 10 percent of the NIH's budget supports projects conducted by nearly 6,000 scientists in its own laboratories, most of which are on the NIH campus in Bethesda, Maryland. To learn more about the NIH, visit www.nih.gov.