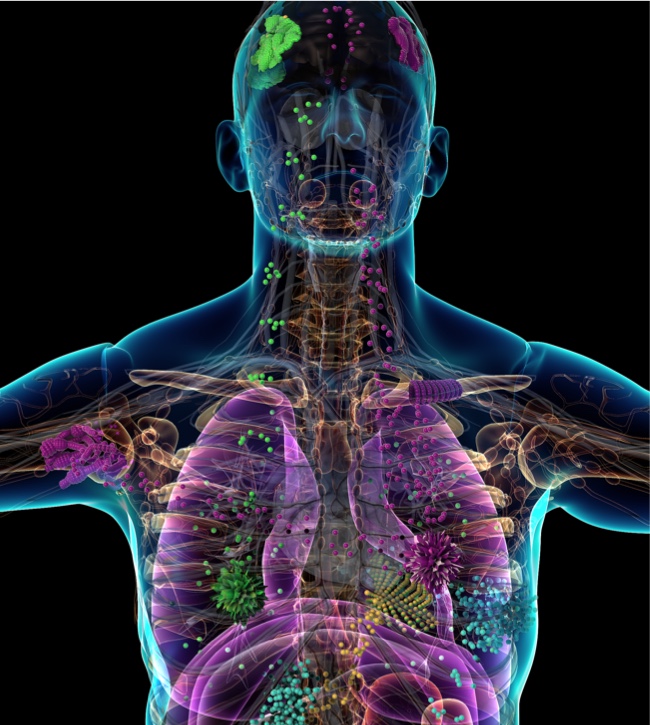 Five hundred cancer patients are getting an in-depth look at their genomes as part of a new clinical study that is revealing some of the key molecular drivers of metastatic cancers. Some of the patients, who were diagnosed with more than 20 different types of cancer among them, are now working with their physicians to use their genomic information to guide treatment options.

The data are helping physicians match patients to clinical trials that address the precise DNA mutations that enable their cancers’ growth, says study coauthor Arul Chinnaiyan, an HHMI investigator and cancer biologist at the University of Michigan. He is among the first researchers to take this kind of precision medicine approach to better understand and treat metastatic cancers – an aggressive form of the disease in which cells from the original tumor break away and invade other tissues.

Chinnaiyan’s findings, published August 2 in the journal Nature, contribute to a growing body of research that reveals the molecular underpinnings of patients’ tumors. Chinnaiyan’s team has also made their dataset available to other scientists investigating metastatic cancer.

“Ninety percent of the time, metastatic cancer is the form of cancer that patients die of,” Chinnaiyan says. “It’s very difficult to treat once you have it.”

The ongoing clinical study employs tumor sequencing, in which researchers extract tumor cells from patients and characterize the cells’ genetic makeup. Using this information, Chinnaiyan and his team can create molecular profiles of the tumor that reveal details of what went awry – such as mutations, gene fusions (when two separate genes erroneously combine) and other molecular abnormalities. The data pointed Chinnaiyan and his team to five genes, all of which were commonly altered in patients with metastatic cancer. Additionally, the researchers observed that 12 percent of patients carried potential cancer-causing errors in DNA carried by sperm and egg cells.

“This gave us a pretty comprehensive picture of the molecular landscape of cancer,” said Chinnaiyan.

The data are a result of two genomic sequencing techniques – DNA and RNA sequencing, or whole-exome and transcriptome sequencing, respectively. In DNA sequencing, researchers extract and analyze DNA from a patient’s tumor and healthy tissues to try and discern what went wrong in the tumor. By comparing the two sets of DNA sequences, scientists can pick out genomic differences between the normal and the tumor DNA. “That's key because it allows us to potentially know what's driving the cancer in that individual patient,” Chinnaiyan said.

"This gave us a pretty comprehensive picture of the molecular landscape of cancer."

RNA sequencing allows researchers to better identify deleterious alterations, such as gene fusions or changes in gene expression. Chinnaiyan and his team also used RNA sequencing to analyze the amount and type of immune cells that infiltrated the patients’ tumor-invaded tissues. RNA sequencing data, he says, allows a clearer glimpse into the “immune phenotypes” associated with individual cancers – in other words, the factors that suppress the immune system’s ability to fight tumor growth.

“Immunotherapy has been one of the major areas of progress in cancer therapeutics, thus emphasizing the need to understand the immune microenvironment of the tumor,” Chinnaiyan explains.

He says that it’s crucial to understand that cancer is never static and always evolving – and treatments should reflect that. As tumors cross into different tissues, new mutations may arise, changing their molecular composition, which could diminish the efficacy of cancer drugs. Likewise, tumors can adapt to therapeutic drugs and develop new ways to survive. To maintain the most effective, up-to-date, treatment, Chinnaiyan argues that more frequent biopsies (of both the tumor and its immune microenvironment) are critical.

“We should be doing contemporaneous sequencing of cancer patients’ genomes – real-time assessments of the patient rather than relying on recommendations based on archival samples of the primary tumor,” he says.

Now, Chinnaiyan and his team are continuing to gather sequence data from patients with metastatic cancer. The researchers want to build and contribute to a large database for scientists and doctors to use. Chinnaiyan hopes that a genome-first approach will help doctors and patients develop agile treatment strategies that remain effective despite the dynamism of metastatic cancer.