The roundworm C. elegans is sensitive to DEET’s insect-repellent effects. The discovery opens up a new genetic toolbox that scientists can use to figure out how DEET works.

The U.S. military developed the insect repellent DEET more than half a century ago, but no one knows how the chemical keeps mosquitoes from biting. Now, Howard Hughes Medical Institute (HHMI) Investigator Leslie Vosshall’s team is one step closer to figuring it out.

In small soil-dwelling roundworms, DEET stymies the sense of smell, Vosshall and colleagues report September 26, 2018, in the journal Nature. The worms, called Caenorhabditis elegans, have long been used in scientific research, and there is an arsenal of genetic tools that scientists can now use to probe exactly how DEET affects insects. Those extensive tools don’t currently exist in mosquitoes, Vosshall says.

The work could one day point researchers toward more effective DEET alternatives, she says. “You can’t improve on something if you don’t know how it works.”

DEET is the gold standard for insect repellents, but it is far from perfect. The compound is oily, can damage clothing, and has to be reapplied at least every eight hours. Slathering on DEET repeatedly is not always feasible for people in areas where mosquitoes spread life-threatening diseases, says Vosshall, a neurobiologist at The Rockefeller University.

“It’s always been a dream in our field to come up with something that’s not oily and doesn’t need to be reapplied,” she says.

Scientists have come up with three competing theories as to how DEET interferes with insects. The chemical may confuse them, mask tasty odors, or simply smell unappetizing. Vosshall’s earlier research suggested that DEET works more as a “confusant” than a repellent – the molecule somehow scrambles insects’ sense of smell so they can’t find their food. For mosquitoes looking for a blood meal, that means they can’t home in on human scents, such as body odor and breath.

DEET works well to deter mosquitoes – and it thwarts honeybees, ticks, and land leeches, too.

Vosshall’s graduate student Emily Dennis was fascinated by DEET’s effectiveness against animals separated by millions of years of evolution. A collaborator tipped her off that the chemical even seemed to affect the behavior of C. elegans. So Dennis decided to test it.

First, she placed a drop of DEET into a plastic dish with C. elegans. The worms crawled around as if the chemical wasn’t even there.

Next, Dennis added four worm-tempting odors to the dish. Three seemed to confuse the worms. Instead of heading toward the scents, the worms stopped or paused in place, unable to move. Strangely, DEET didn’t muddle the worms’ response to the fourth odor, a nutty-smelling chemical called pyrazine. They quickly crawled toward the smell.

“That told us that some odors are affected by DEET and some are not,” Dennis says. “DEET wasn’t just paralyzing the worms – something more interesting was going on.” 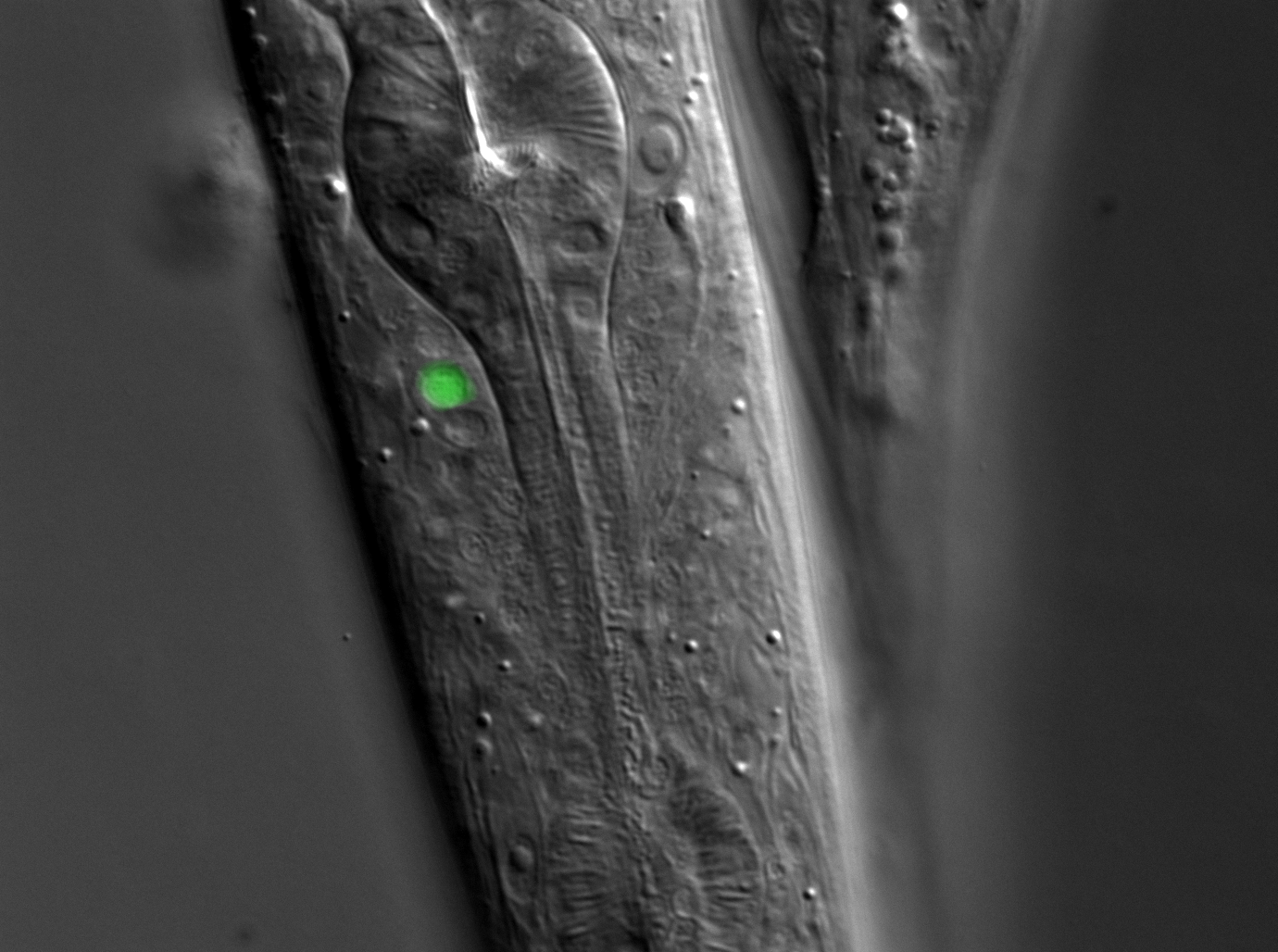 Vosshall’s team mutated different genes in hundreds of individual worms to figure out which genes were involved in the strange behavior. Then, the researchers ran the same odor experiments again, to see how specific genetic tweaks affected the worms’ response to different scents.

The researchers identified a gene and two neurons that seemed to be involved in the worms’ odd reaction to DEET. The gene str-217 encodes a protein in a pair of chemosensory neurons that helps the animal detect certain chemicals. Switching on these neurons made worms pause – just like they did in response to DEET. And disabling the gene made worms resistant to DEET’s effects. The results suggest that DEET interferes with neural circuitry underlying worms’ sense of smell, ultimately jumbling their response to certain odors.

“The animal no longer recognizes that the good stuff is good, and the bad stuff is bad,” Vosshall says.

The gene and neurons her team identified aren’t found in mosquitoes. But Vosshall is confident that other genes lurking in the worm genome could offer more clues to how DEET works in biting insects. “What we learn will help us understand how DEET can reach into a nervous system and confuse it,” she says. And that could help researchers develop a better repellent.