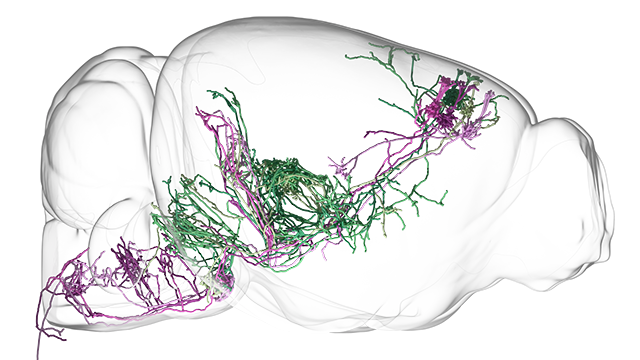 The mouse brain contains roughly 80 million neurons, all packed into a space about the size of a hazelnut. Those cells come in a vast assortment of shapes and sizes, and their connections with one another number in the billions – at least.

The brain depends on this circuitry to interpret information about the world, learn from experiences, and control movements. Nerve cells intermingled in this tight space form an intricate network – making it difficult for scientists to understand which cells are responsible for which tasks.

Now, in two papers published October 31, 2018, in the journal Nature, researchers at the Howard Hughes Medical Institute’s Janelia Research Campus and the Allen Institute for Brain Science have worked out how two types of intermingled nerve cells divide the labor to plan and initiate movements. By integrating cell-by-cell analyses of neurons’ shapes, gene activity, and function, the team has teased out which brain cells are responsible for these distinct but closely related jobs.

Combining such extensive analyses represents a major technical feat, says Janelia Group Leader Karel Svoboda. It’s a new approach to understanding brain function, he says. The work required multiple teams of scientists at multiple institutes teaming up to solve a single problem. Svoboda thinks that this kind of approach will be necessary to help researchers crack the most complex questions in neuroscience.

“Major progress in brain research will increasingly rely on these types of collaborations,” he says.

Around the world, researchers have embarked on efforts to build comprehensive neural maps to uncover truths about the brain. 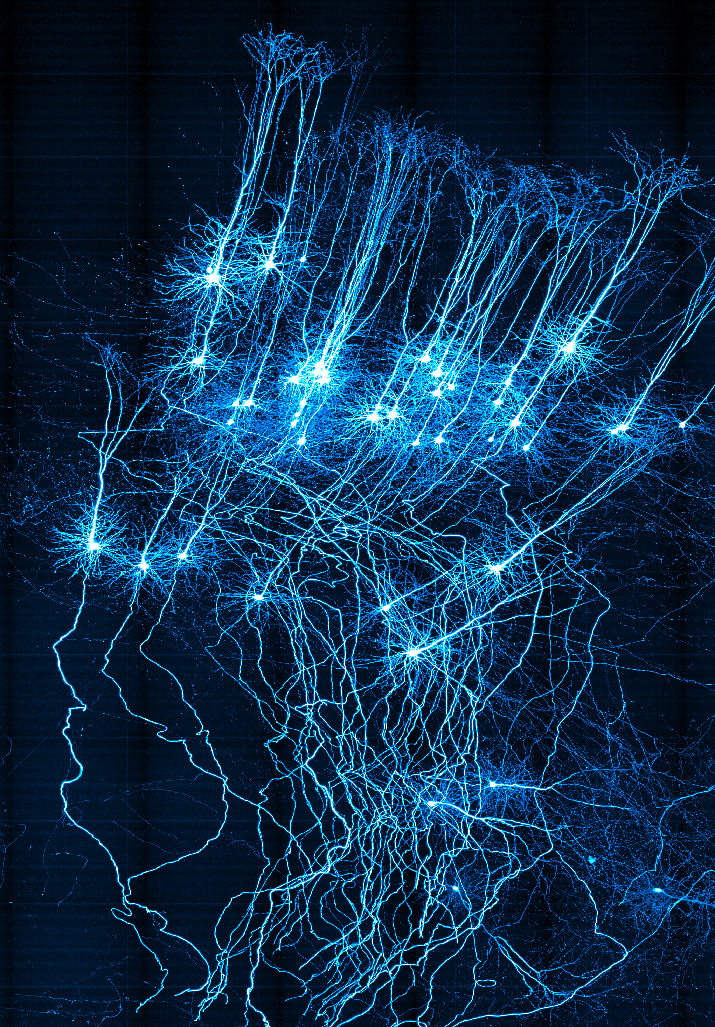 At Janelia, one long-term mapping effort involves neuronal anatomy. Scientists on the MouseLight project team have been determining the precise structure of neurons in the mouse brain – a massive undertaking that involves painstakingly tracing individual neurons’ wiry paths across thousands of images of the brain. Complementary efforts at the Allen Institute are charting cells’ gene expression, revealing key similarities and differences between cells and offering hints into cellular function.

In the new work, Janelia scientists Mike Economo, Sarada Viswanathan, Loren Looger, Svoboda, and colleagues joined forces with Allen Institute scientists to create complete gene expression profiles of cells within the mouse neocortex. The neocortex is the largest part of the mammalian brain responsible for higher cognitive functions. The team focused on the anterior lateral motor cortex (ALM), an area involved in planning and executing movements.

The Janelia and Allen Institute groups have been collaborating for years, Svoboda says. His lab has worked to describe how ALM neurons code information and control movements, and Allen Institute scientists used new single-cell RNA sequencing technology to analyze the molecular make-up of individual ALM neurons.

Bosiljka Tasic, Hongkui Zeng, and colleagues at the Allen Institute determined the full set of RNA molecules – the transcriptome – present in each of 23,822 neurons from the neocortex. This generated a complete picture of which genes were switched on in every cell – about 9,000 genes per cell, on average. Within the vast dataset, the researchers identified more than 130 groups of cells that shared transcriptomes.

Next, the team correlated their molecular findings with structural information obtained through Janelia’s MouseLight project. 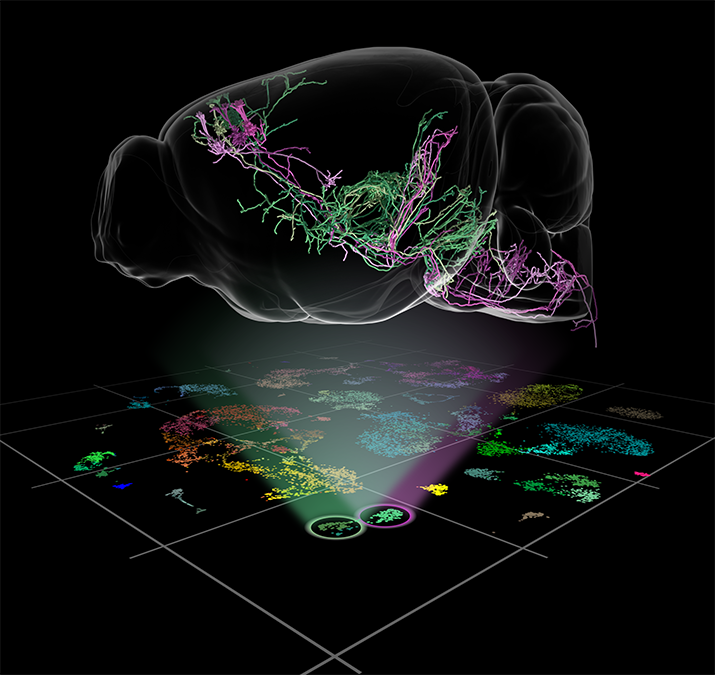 Janelia and Allen Institute scientists identified different cell types in the motor cortex based on gene expression patterns. These cell types are represented as colored “islands” below the brain. The two circled islands defined on the basis of molecular properties correspond to green and pink morphology types. Credit: Michael Economo, Janelia Research Campus

The scientists focused on large neurons in the ALM that carry information away from the cortex. Within this subset of neurons, two groups of cells defined by their transcriptomes also shared anatomic features. Their paths to other parts of the brain are distinct, the team discovered. One set connects to the brainstem, where motor neurons that direct the body to carry out actions reside. The second set connects with the thalamus, a sort of central switchboard in the brain.

Collectively, these cells have already received attention from neuroscientists because they are particularly vulnerable to neurodegenerative disease. “But it really hasn’t been appreciated that these neurons come in discrete flavors and might play different roles,” says Economo, a postdoctoral researcher in Svoboda’s lab.

By pulling together multiple data streams, he says, the team was able to bring clarity to a complex circuit question.

“Scientists can always find ways to divide cells into groups,” Tasic adds, but in this case, the groups offer a clear picture of each cell type’s role in shaping movement. It’s a key step in picking apart the complexity of the cortex.

With the functions of more than 100 molecularly defined cell types in the visual cortex and the ALM alone still to be explored, scientists have a lot of complexity left to unravel, Svoboda says. But, he adds, with new research tools in development and large-scale mapping efforts accelerating, this type of neural decoding could soon be ramping up.