CRISPR Enzyme Protects Bacteria by Turning Infected Cells on Themselves

Cas13 enzyme defends bacteria from DNA viruses by targeting the host cell’s RNA. Until now, the strategy has never been observed in bacteria. 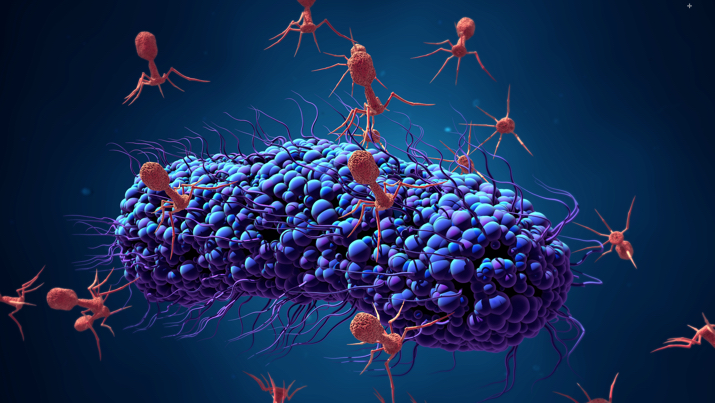 What doesn’t kill a bacterium makes it stronger.

An enzyme that bacteria use to fight off viruses works by targeting not just the virus, but also the bacterium itself. It sends the bacterium into a dormant state and makes it an inhospitable place for viruses to reproduce. That protects bacteria from mutated viruses that slip past other immune defenses, researchers report May 29, 2019, in the journal, Nature.

Disarming or killing host cells is a common immune system strategy, but the new work is the first to demonstrate it for bacterial CRISPR defense, says molecular biologist Luciano Marraffini, a Howard Hughes Medical Institute investigator at the Rockefeller University.

The enzyme, Cas13, was discovered in 2015 and is part of a family of proteins that includes Cas9, an enzyme best known for its role in gene editing. In the popular tool, CRISPR, for example, scientists have used Cas9 to insert or modify specific genes.  In nature, Cas proteins are a key part of bacterial immune systems. They disable viruses that infect bacteria by snipping the invaders’ DNA or RNA.

Scientists already knew Cas13 was a bit of an oddball in its family. If Cas9 is a scalpel, Cas13 is more like a machete. It cuts in specific, targeted locations, but also slashes off target. And unlike most Cas proteins, it cuts RNA, not DNA.

“Cas13 has already become a very powerful diagnostic tool,” says study coauthor Alexander Meeske, also at Rockefeller. Researchers can use it to quickly identify viruses in patients' blood, even those present at very low levels. “What we didn't know,” he says, “is how Cas13’s behavior affects bacterial immunity.”

Now, he and his colleagues have found that Cas13’s seemingly random snips are a valuable bacterial defense tool. While most Cas enzymes protect bacteria by stopping viruses from reproducing, Cas13 disables the bacterial host itself.

That’s important because viruses can easily evade CRISPR systems – just a single genetic mutation in the region that the Cas enzyme targets can make the virus invisible to the immune system. Cas13 can catch those would-be “escapee” viruses, the researchers showed.

First, Meeske and his colleagues analyzed how Cas13 affected RNA. The enzyme cut RNA extensively, they found, breaking down RNA produced by the virus and the host cell. Even when Cas13 snipped regions of RNA that were totally disposable for the virus, the viruses still couldn’t reproduce. That suggested that the host cell was somehow shutting down viral reproduction.

When Meeske then engineered mutated viruses that Cas13 couldn’t recognize, the viruses flourished inside Listeria bacteria. But adding normal, unmutated viruses along with mutated viruses actually protected the cells from infection – they made Cas13 switch on and chop up all the RNA in the cell, he says. “This was so counterintuitive and surprising!”

Without RNA, the bacterial cells couldn’t continue to grow and function. And in non-functioning cells, the mutant virus couldn’t multiply.

It’s unclear whether cells can bounce back from this dormancy or whether they ultimately die, Meeske says. But by stopping viruses from replicating, those cells are protecting the larger bacterial population from the threat.