Technology that’s been used to edit genomes can also spot snippets of DNA. Such detective work may enable rapid, reliable ways to identify infections and cancer. 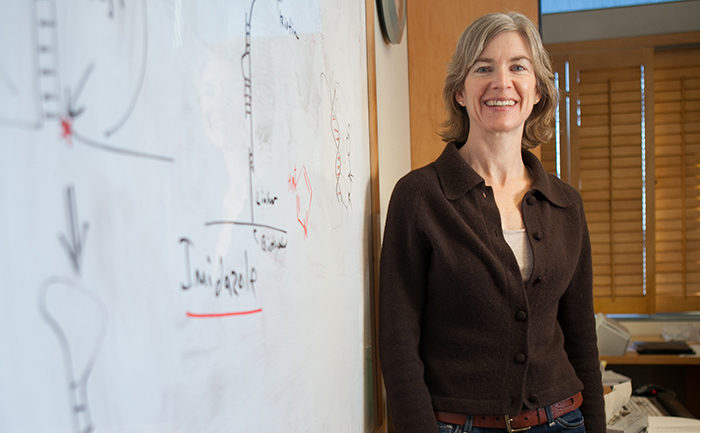 A powerful genome editing tool can be deployed as an ace DNA detective, able to sniff out DNA snippets that signal viral infections, cancer, or even defective genes.

This genetic detective, developed in the laboratory of Howard Hughes Medical Institute (HHMI) Investigator Jennifer Doudna at the University of California, Berkeley, uses the genome-slicing system known as CRISPR. By combining the capabilities of CRISPR with a molecular flare gun, Doudna and her colleagues have devised a simple method that may lead to fast, reliable medical tests.

The new method, called DETECTR, “enables sensitive and accurate DNA detection,” Doudna says, and was able to spot two types of cancer-causing human papillomavirus, or HPV, in human samples. She and colleagues first reported their results in a preprint posted on bioRxiv.org in November 2017; the peer-reviewed report appears February 15, 2018, in the journal Science.

DETECTR, or DNA Endonuclease Targeted CRISPR Trans Reporter, is based on CRISPR, a bacterial defense system that cuts and disables viruses and other threats. Since its discovery, CRISPR has been co-opted by scientists eager to selectively snip and repair genomes. In the new study, Doudna and her colleagues show that CRISPR biology can be used in another way, too ­– as a DNA homing beacon. 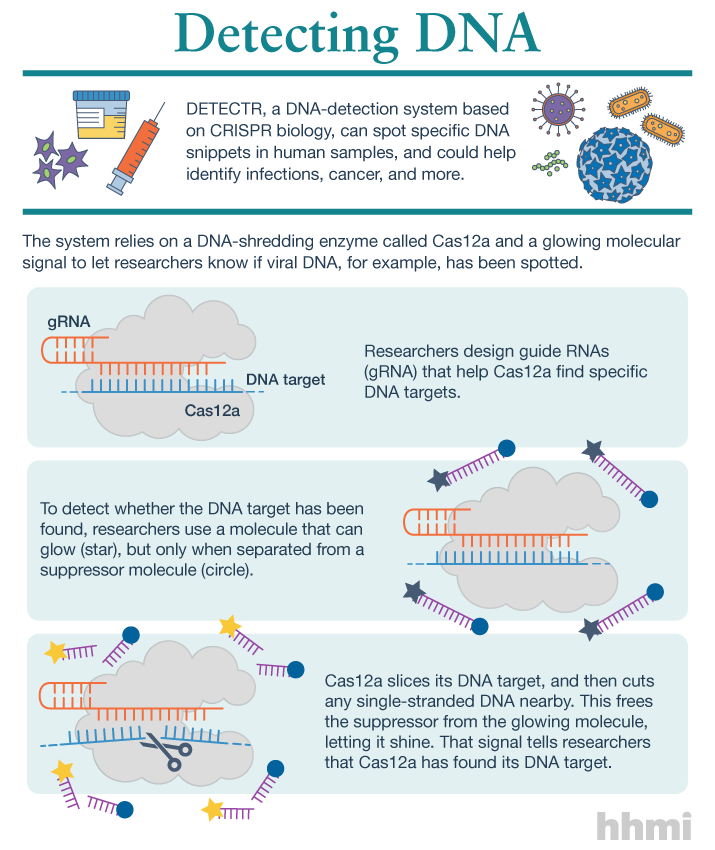 DETECTR relies on Cas12a, an enzyme described in 2015. Like its molecular cousin Cas9, which Doudna and colleague Emmanuelle Charpentier turned into a genome editing tool in 2012, Cas12a snips DNA. But instead of snipping only the DNA strand it binds, Cas12a chops other DNA, too. “We started to see this surprising activity where it would just start cutting random stuff,” says study coauthor Lucas Harrington, a graduate student in Doudna’s lab.

Under certain circumstances, the enzyme turns into a DNA shredding machine, slicing up any single-stranded DNA nearby, the researchers saw. But this wasn’t indiscriminate destruction. For the machete action to begin, Cas12a first has to find a precise DNA target. Researchers can program that target by adding a guide – an RNA molecule that tells Cas12a what to look for. “It’s so easy to reprogram this to find any piece of DNA that you want to detect,” Harrington says.

Once Cas12a locks onto and snips the target, it then begins shredding all of the single-stranded DNA it can find. But for the system to be useful, Doudna and colleagues needed a way to see when Cas12a starts this molecular mayhem, signaling that it has found its target. So the researchers used a glowing molecule – an easy-to-spot flare – linked by a single strand of DNA to a suppressor molecule that prevents the glow. When Cas12a turns into a machete, it slices the DNA strand that links these two molecules together. This removes the suppressor, letting the glowing molecule shine ­­– a signal researchers can detect.

The team then put their DNA detective to the test. Working with Dr. Joel Palefsky and his team at the University of California, San Francisco, they hunted for DNA signals from two types of cancer-causing HPV: type 16 and type 18. Researchers obtained 25 DNA samples taken from people who had no HPV infection, one type of virus, or both types. For HPV16, DETECTR made the right call for all 25 samples. For HPV18, DETECTR got it right for 23 of 25 samples. The ones it missed gave weak signals that can likely be improved with different guide RNA design, Doudna says.

Compared with current methods to detect HPV, DETECTR is “simpler, quicker, and does not require specialized equipment,” Harrington says. That could make the system useful in resource-limited health clinics and for point-of-care diagnostics.

About 79 million Americans carry HPV, the Centers for Disease Control and Prevention estimates, and more than 4,000 women die from cervical cancer each year. Together, HPV16 and HPV18 cause 70 percent of cervical cancers and precancerous lesions, according to the World Health Organization.

Doudna’s team’s method could easily be applied to other types of viral or bacterial infections, and even cancer markers, chromosomal abnormalities, or other genetic signals, Harrington says. More generally, the results highlight the promise of basic biology. Basic research on an ancient bacterial defense system keeps turning up new surprises, and new potential uses. CRISPR “is a treasure chest that we keep digging into and finding new things,” Harrington says.