Changing the Emotional Association of Memories

New research by HHMI scientists shows that the emotional memory of an experience is malleable. 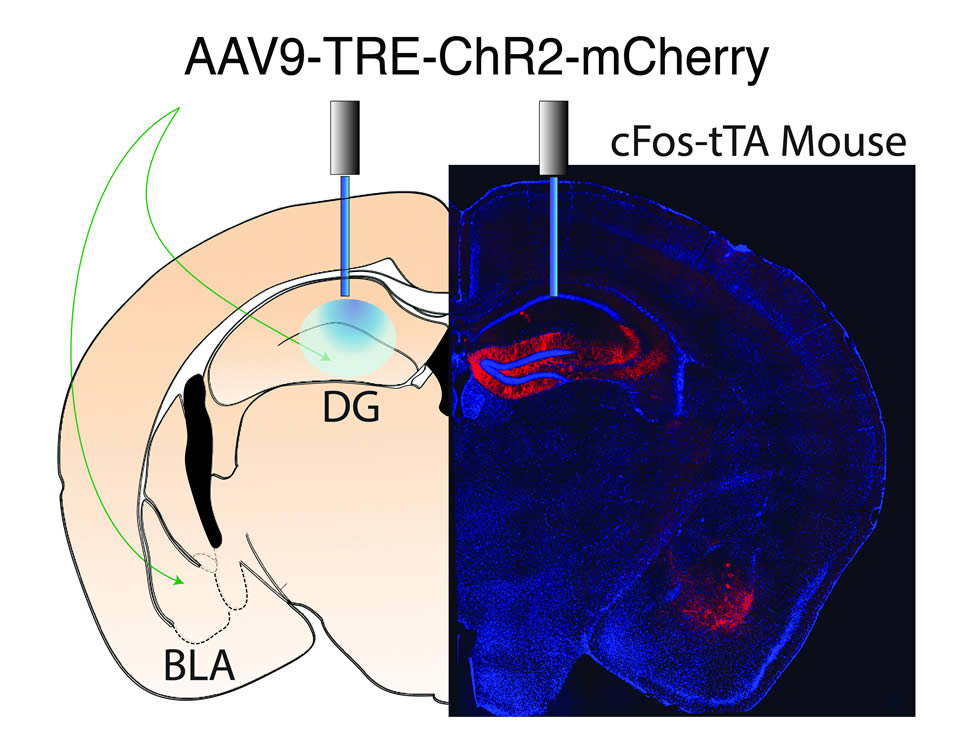 By manipulating neural circuits in the brain of mice, scientists have altered the emotional associations of specific memories. The research, led by Howard Hughes Medical Institute investigator Susumu Tonegawa at the Massachusetts Institute of Technology (MIT), reveals that the connections between the part of the brain that stores contextual information about an experience and the part of the brain that stores the emotional memory of that experience are malleable.

Altering those connections can transform a negative memory into a positive one, Tonegawa and his MIT colleagues report in the August 28, 2014, issue of the journal Nature.

“There is some evidence from pyschotherapy that positive memory can suppress memories of negative experience,” Tonegawa says, referring to treatments that reduce clinical depression by helping patients recall positive memories. “We have shown how the emotional valence of memories can be switched on the cellular level.”

The episodes and events that we experience become intimately associated with emotion as they are stored as memories in the brain. Recalling a favorite vacation may summon pleasure for years to come, whereas the fear that accompanies a memory of assault might cause a victim to never return to the scene of the crime. Tonegawa explains that the contextual information about these events – where and when they happened—is recorded in the brain's hippocampus, whereas the emotional component of the memory is stored separately, in a brain region called the amygdala. “The amygdala can store information with either a positive or negative valence, and associate it with a memory,” Tonegawa explains.

Last year, Tonegawa and his colleagues reported that by artificially activating the small set of cells that stored a specific memory in a mouse, they could create a new, false memory. In that study, the team made the cells that stored a memory of a safe environment sensitive to light, so that they could be manipulated by the researchers. Switching on those cells while subjecting the animal to a mild shock in a new environment caused the mouse to fear the original environment, even though it had had no unpleasant experiences there.

In those experiments, the scientists had caused the mice to associate a neutral setting with fear. Now Tonegawa and his colleagues wanted to see if he could alter a memory that was already associated with emotion. Once an animal had developed fear of a place, could the memory of that place be made pleasurable instead?

To find out, the scientists began by placing male mice in a chamber that delivered a mild shock. As the mouse formed of memory of this dangerous place, Tonegawa's team used a method it had previously developed to introduce a light-sensitive protein into the cells that stored the information. By linking the production of the light-sensitive protein to the activation of a gene that is switched on as memories are encoded, they targeted light-sensitivity to the cells that stored the newly formed memory.

The mice were removed from the chamber and a few days later, the scientists artificially reactivated the memory by shining a light into the cells holding the memory of the original place. The animals responded by stopping their explorations and freezing in place, indicating they were afraid.

Now the scientists wanted to see if they could overwrite the fear and give the mice positive associations to the chamber, despite their negative experience there. So they placed the mice in a new environment, where instead of a shock they had the opportunity to interact with female mice. As they did so, the researchers activated their fear memory-storing neurons with light. The scientists activated only one subset of memory-storing neurons at a time—either those in the context-storing hippocampus or those in the emotion-storing amygdala. They then tested the emotional association of the memory of the original chamber by giving mice the opportunity to move away from an environment in which the memory was artificially triggered.

Reactivating the amygdala component of the memory while the male mice had the pleasurable experience of interacting with females failed to change the fear response driven by those amygdala neurons. Consequently, mice retained their fear. When the researchers reactivated the memory-storing cells in the hippocampus while the mice interacted with females, however, the memory cells in the hippocampus acquired a new emotional association. Now the mice sought out environments that triggered the memory.

The researchers had similar results in experiments where they switched the emotion of a memory in the opposite direction—allowing mice to first develop a pleasurable memory of the chamber, then artificially activating the memory-storing cells in the hippocampus while the animals experienced a shock. In those mice, the pleasurable response linked to the hippocampal memory cells was replaced with a fear response.

The experiments indicate that the cells that store the contextual components of a memory form impermanent or malleable connections to the emotional components of that memory. Tonegawa explains that while a single set of neurons in the hippocampus stores the contextual information about a memory, there are two distinct sets of neurons in the amygdala to which they can connect: one set responsible for positive memory, the other responsible for negative memory. Circuits connect the hippocampal cells to each of the two populations of cells in the amygdala. “There is a competition between these circuits that dictates the overall emotional value and [positive or negative] direction of a memory,” Tonegawa says.

In an accompanying News & Views article in Nature, Tomonori Takeuchi and Richard G.M. Morris of the University of Edinburgh, state, “What is so intriguing about this study is that the memory representations associated with a place are dissected into their network components and, rather than re-exposing the animals to the training situation to achieve a change, light is used to selectively reactivate the representation of the ‘where’ component of a memory and then change its ‘what’ association.”

Tonegawa emphasizes that their success in switching the emotion of a memory in mice does not translate to an immediate therapy for patients. There is no existing technology to manipulate neurons in people as they did in their mouse experiments. However, he says, the findings suggest that neural circuits connecting the hippocampus and the amygdala might be targeted for the development of new drugs to treat mental illness.