HHMI researchers have identified 27 genes in brain stem cells that are prone to a type of DNA damage called double-strand breaks. 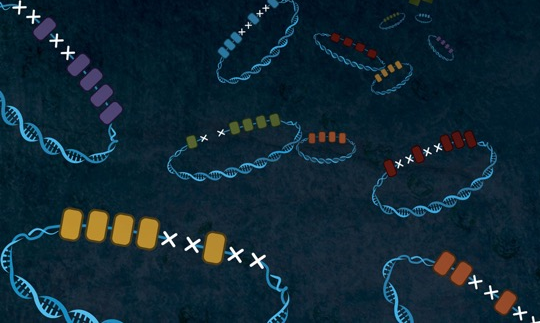 Howard Hughes Medical Institute (HHMI) researchers have identified 27 genes in brain stem cells that are prone to a type of DNA damage. The fragility of those genes could explain why they are often mutated or deleted in cancers and neuropsychiatric disorders such as schizophrenia. But their tendency to break could also benefit the brain by providing a way to produce a greater diversity of neurons.

“We found a class of DNA breaks that nobody expected,” says HHMI investigator Frederick Alt of Boston Children’s Hospital who performed the research along with a team that included his colleague Bjoern Schwer, postdoctoral researcher Pei-Chi Wei, and graduate student Amelia Chang. The scientists published their results on February 11, 2016 in the journal Cell.

Broken DNA sounds like a disaster for a cell--and it often is. Unrepaired DNA damage can kill the cell or cause it to become cancerous. But broken DNA isn’t all bad. As the B cells of the immune system prepare to manufacture antibodies to fight pathogens, they intentionally fracture and then rearrange their antibody genes.

DNA breaks could also be helpful in another way. Researchers have found that neurons have often lost, duplicated, or reshuffled chunks of their DNA. “The idea out there is that if you can rearrange DNA, it may increase the diversity of functions in neurons,” says Alt. Although the mechanism behind these genomic alterations remains unclear, some could result from DNA breaks in primary neural stem and progenitor cells. These cells would then pass the breaks on to their offspring -- the neurons in the brain. Pinpointing these breaks has been a challenge, Alt says. “There’s never been a way to ask whether there are breaks in specific regions in neural cells. That’s what led to our study.”

Alt and his colleagues have developed a technique that enables them to home in on one type of chromosome damage, double-strand breaks, in which the DNA double helix is severed. Cells typically mend these injuries by stitching the DNA ends back together. But cells sometimes attach the ends from one break to the ends from another break that is on the same chromosome or even on another chromosome that happens to be nearby. As a result, pieces of DNA can move within and sometimes between chromosomes.

The method Alt’s team devised takes advantage of the occasional liaisons between nearby breaks. The researchers trigger new double-strand breaks, which serve as “baits” that attract breaks that already existed in a particular cell. The technique allows the researchers to map the genomic locations of double-strand breaks down to the level of individual nucleotides, and in previous studies Alt and colleagues have used it to detect breaks in B cells.

In their new work, the scientists scanned for double-strand breaks in the genomes of primary neural stem and progenitor cells from the brains of young mice. “We did not look for any breaks in particular,” says Alt. Yet, they uncovered thousands of  breaks that fell near each other. “We found 27 clusters of breaks that very reproducibly occurred,” says Alt.

Although most of the human genome doesn’t consist of genes, all of the 27 clusters Alt’s team identified were located in genes. Almost all of these genes took part in two vital functions, the researchers determined. Fifteen of the genes code for proteins that enable neurons to adhere to their neighbors, an ability that helps organize the different parts of the brain. And 22 of the genes are involved in the formation or activity of synapses, the junctions between neurons across which brain impulses travel.

Why are the 27 genes the researchers identified so easily broken? They are all large, but the team determined that their size didn’t explain their fragility. Another similarity among the genes might offer an explanation, however. When a cell duplicates its DNA in preparation for division, these genes are among the last to be copied. Because of their tardiness, the molecular machinery that reads the genes to allow protein synthesis might collide with the molecular machinery that is copying the genes. These crashes could lead to double-strand breaks, the researchers suggest.

What is clear is that when these fragile genes do break, the consequences can be severe. Previous studies have linked mutations in the genes to a range of neurodevelopmental or neuropsychiatric disorders such as schizophrenia, autism spectrum disorder, and bipolar disorder. The genes are also frequently lost in some types of cancers, including the brain cancer glioblastoma and prostate cancer.

Alt and his colleagues want to take a closer look at the breaks and answer questions such as how they change the functions of neurons. He says that those results might provide clues to whether the breaks have an upside and serve as “a way to hardwire diversity” by creating different varieties of neurons that can take on different tasks.