Brain Compass Keeps Flies on Course, Even in the Dark

New research hints at strategies fruit flies use to keep track of where they are going, even when it's dark. 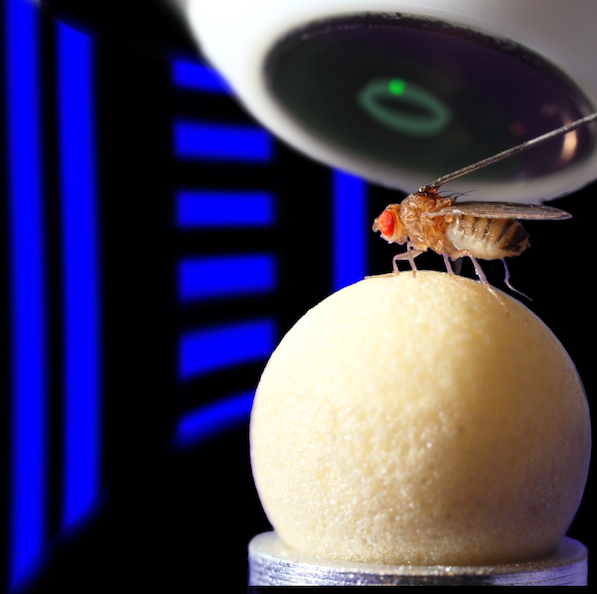 If you walk into a dark room, you can still find your way to the light switch. That’s because your brain keeps track of landmarks and the direction in which you are moving. Fruit flies also boast an internal compass that works when the lights go out, scientists at the Howard Hughes Medical Institute’s Janelia Research Campus have discovered. Their findings suggest that dissecting how fruit flies navigate through the world could help researchers understand how humans and other mammals perform similar tasks.

In our brains, several kinds of neurons help us get and keep our bearings. Head direction cells, for example, use landmarks to report our orientation in our surroundings. These cells also register how much we turn, allowing us to steer in the right direction – at least for a while – even if landmarks are unavailable.

Mammalian brains are complex, however, and researchers might be able to investigate important aspects of how such cells work by studying fruit flies, says Vivek Jayaraman, a group leader at the Janelia Research Campus. Fruit fly brains are smaller and contain fewer neurons, and researchers have powerful genetic tools for monitoring and perturbing specific neurons and neural circuits in these insects. But scientists weren’t sure if flies had neurons similar to head direction cells.

To find out, Vivek’s postdoctoral fellow Johannes Seelig put flies into a tiny virtual reality arena. Each fly, which is tethered to prevent it from taking off, “plays a role-playing game,” says Vivek. It walks on a small rotating ball while facing a curved LED screen that shows different visual patterns. A fly usually heads for vertical stripes, and the researchers synchronized the rotation of patterns on the screen to the rotation of the ball, creating the illusion that the background was moving as the fly turned.

Using a two-photon laser scanning microscope and Janelia-made genetic tools that cause neurons to glow brightly as calcium levels inside neurons increase, the researchers could monitor whether specific cells in the fly’s brain fired during the experiments. The scientists zoomed in on the ellipsoid body, a donut-shaped structure in the middle of the fly’s brain where they suspected the insect version of head direction cells might reside.

If cells in the ellipsoid body operate like head direction cells in mammals, they should stay on track even in the dark. That’s what Seelig and Vivek found when they shut out the lights in the arena and painted the fly’s eyes black. The same part of the ellipsoid body remained active as the flies trotted along. “The fly maintains a representation of where it is even when it’s not getting visual information,” says Vivek.

Like mammals, the insects appear to gauge how much they have turned, although, unlike mammals, they do not rely on a vestibular system to do this. But when the flies stopped turning on the ball, the researchers found that the cells could retain a memory of the insect’s orientation even without that information. The cells appeared to allow the fly to keep its bearings even when it had been standing in place in the dark for more than 30 seconds.

The fly’s ellipsoid body cells may share several similarities with the head direction cells of mammals, Seelig and Vivek suggest, even if they are not equivalent. Although researchers have long known that insects such as bees and ants can perform tremendous feats of navigation, now “we are seeing how a little insect’s brain can do things not very different from our own,” says Vivek. And that means the insects could be more useful than researchers imagined for answering questions about how the brain sets the right course. “The bottom line is that I think we’re starting to see increasing evidence that the fly may have a lot to tell us about how our own brains work, even when it comes to more complex aspects of cognition,” Vivek says.