A Blueprint for New Fertility Drugs

New images show how follicle-stimulating hormone interacts with its receptor. The information may speed up the design of oral medications to treat infertility.

Researchers now have a much better picture of how follicle-stimulating hormone (FSH), one of the most frequently used fertility drugs, works, and with it, ideas for creating a new generation of oral medications to treat infertility.

The exquisite detail of the images produced by Howard Hughes Medical Institute (HHMI) investigator Wayne A. Hendrickson and colleague Qing Fan begins to tell for the first time how the FSH hormone attaches to a key segment of its receptor on the cell surface. The binding of the hormone to its receptor then stimulates the maturation of ovarian follicles in women or sperm production in men.

This paper provides many quite specific hypotheses that we can now test as we work to understand the process of receptor activation.

Insights gleaned from this structure could aid in the development of improved fertility drugs or contraceptives for both men and women. Hendrickson and Fan, who are both at Columbia University, reported the details of the structure in an article published in the January 20, 2005, issue of the journal Nature .

“Although the nature of FSH and other glycoprotein hormones has been known for more than 30 years, there is still no orally active therapeutic drug,” wrote James A. Dias of the Wadsworth Center in Albany, NY in a commentary in the journal Nature . “But such a drug might one day be developed, thanks to the findings presented by Fan and Hendrickson.”

“The crystal structure of FSH in complex with the FSH receptor extracellular domain is a major achievement in the field of glycoprotein hormones and G-protein coupled receptors," said Dias in an interview. "For ten years we have had the 'key.' That is, the crystal structure of the hormone.... Now we not only have the lock, but the key in the lock," he said.

Researchers are equally excited by the architectural blueprint of FSH and its receptor because it may help unravel the structural framework of a trio of other hormones, notably, luteinizing hormone (LH), chorionic gonadotropin (CG), and thyroid-stimulating hormone (TSH).

Hendrickson acknowledges that many biochemical studies by other researchers contributed pieces to the puzzle of how FSH plugs into its receptor on the cell surface. Those studies indicated that FSH might function much like LH, CG and TSH. Of special note, according to Hendrickson, was the structure of FSH, which had been solved by Dias and colleagues at the Wadsworth Center of the New York State Department of Health.

Receptors such as FSH are switches that are situated in the cell membrane. When triggered by a molecular signal, such as a hormone, the switches activate specific cellular processes. In the case of FSH, activation stimulates egg and sperm production in reproductive cells.

Until now, researchers did not understand key details about how FSH interacts with its receptor, largely because the complex had never been crystallized and examined at the molecular level. Thus, Qing Fan set out to produce crystals of the complex to use in determining its structure using x-ray crystallography. In this widely used analytical technique, x-rays are directed through crystals of a protein to be analyzed. The diffraction patterns that result are then analyzed using computers to deduce the structure of the molecule under study.

Producing the crystals was a considerable challenge, said Hendrickson, in part because FSH and its receptor are glycoproteins with numerous sugar molecules attached to the protein backbone. The presence of sugar molecules complicates both the crystallization of the protein and its production in microorganisms normally used as “factories” for such molecules. Fan concentrated on crystallizing the FSH molecule while it was attached to a truncated binding portion of its receptor. She also removed some of the sugars on the complexed molecules to aid crystallization. The researchers had used insect cells as factories for the FSH-receptor complex protein, rather than bacterial cells, which do not manufacture proteins that are decorated with sugars.

Fan engineered the cells to produce the FSH-receptor complex together, rather than trying to make the two molecules separately and combine them, said Hendrickson. “We reasoned that we might have a better shot at obtaining the complex if we co-produced them and tried to form the complex directly,” said Hendrickson. “We knew from the evidence of other researchers that the association between these two components was very tight. So, we expected that if we made them together, they would stay together,” he said. 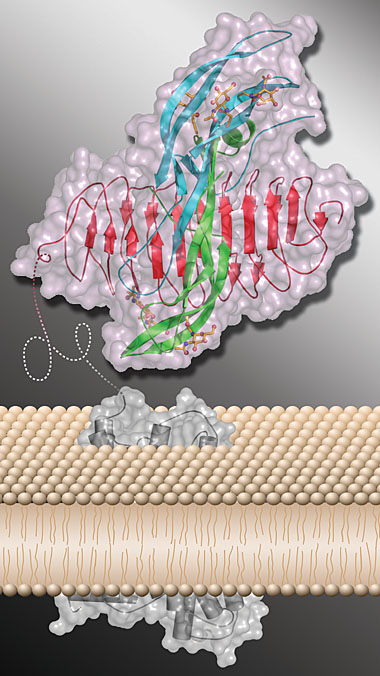 The resulting x-ray crystallographic structure yielded important insights into the FSH-receptor complex, said Hendrickson. “We found that the binding segment of the FSH receptor takes the shape of a slightly curved tube, and it binds FSH in what we describe as a `handclasp,'” he said. “It's an extensive interaction, as if you take one hand and clasp the other.” A peculiarity of the interface between FSH and the receptor, said Hendrickson, is that the handclasp covers a broad area, with each protein having large charged surfaces that interacts with the other.

The structure offers new information about how FSH is able to interact with its receptor so specifically and not with other highly similar receptors. It was known that the “alpha” subunit of such glycoprotein hormones—FSH, LH, CG and TSH—is common among the hormones, and that only the “beta” subunit is specific to a hormone. However, Hendrickson and Fan found that both the alpha and beta subunits work in concert to create specificity of interaction.

“If you take at face value the idea that the specificity of interaction is caused only by the beta subunit, it's hard to understand how they both contribute,” he said. “But the value of our three-dimensional structures is that they show that specificity is conferred by a strip of the hormone's beta subunit sandwiched between pieces of alpha, all of which are in contact with the receptor molecule.”

Fan and Hendrickson also found that the hormone undergoes a conformational change by its interaction with its receptor—an insight that could provide a valuable clue to how FSH and other related hormones switch on signaling activity in the target cell.

“This paper provides many quite specific hypotheses that we can now test as we work to understand the process of receptor activation,” said Hendrickson. Thus, he said, further efforts in his laboratory will include producing the entire receptors for such glycoprotein hormones, to explore their signaling mechanisms when triggered by the hormones.

Although not a clinician by training, Hendrickson is keenly aware that his group's studies could have important clinical implications. “FSH is already being used to stimulate ovulation in women who are infertile and to enhance spermatogenesis in men,” he said. “Knowing the details of the hormone-receptor structure could enable modifications to FSH used in treatment to make it more potent and longer-lived in the bloodstream. One could also imagine the possibility of designing small-molecule contraceptive compounds that would bind to the receptor and prevent hormone binding.”

Hendrickson said that the latest work on FSH is one component of a broad effort in his laboratory to understand how receptors work. “We have had a long-standing interest in the general problem of how signals are transmitted across the cell membrane to mediate changes within the cell,” he said. “We would like to understand the biophysical principles that underlie the transmission mechanisms by which signals from outside of cells propagate to the inside.”

Hendrickson's lab has studied the structure of chorionic gonadotropin, the insulin receptor and the fibroblast growth factor receptor. He said his group is now concentrating on the action of the large family of G-protein-coupled-receptors—including those for the glycoprotein hormones—that regulate a vast range of cellular processes.