Bad to the Bone: Some Breast Cancer Cells Are Primed to Thrive

Some breast cancer cells have a leg up on survival—the genes they express make them more likely to spread and prosper in bone tissue. 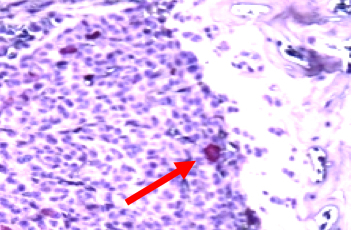 When a cancer cell sloughs off the edge of a tumor in the breast, it faces a tough road to survive. The cell must not only remain physically intact as it rushes through blood vessels, but it also must find a new organ to lodge itself in, take in enough nutrients and oxygen to stay alive, and begin dividing, all while escaping notice by the body’s immune system.

A team of Howard Hughes Medical Institute (HHMI) scientists has discovered that some loose breast cancer cells, have a leg up on survival—the genes they express make them more likely to prosper in bone tissue. The team also found that whether or not cancer cells turn on those genes depends on what their surroundings were like in the primary breast tumor. If the breast tumor had molecular patterns similar to those found in bone, the tumor is more likely to spread to bone later.

“It’s like in society—who you hang out with shapes who you are,” says HHMI investigator Joan Massagué of Memorial Sloan Kettering Cancer Center. “And that might make you better or worse equipped to handle situations you’ll encounter.”

The new findings, published August 29, 2013 in the journal Cell, could eventually lead to new drugs that block cancers from spreading to bone or other organs, he says.

Massagué’s lab group discovered in 2009 that by looking at the genetics of breast cancer cells, they could predict which were most likely to spread to bone. A set of genes dubbed the Src response signature (SRS) was more often turned on in the cells that metastasized to the bone. But the researchers didn’t know why.

“What was really a conundrum was how this pathway got turned on in the first place,” says Massagué. “Because SRS didn’t confer any survival benefit to cells in the primary tumor. We were really at a loss for clues.”

So he and his colleagues took another look at breast tumors that had SRS turned on. They tested whether there were any other genes, outside the known SRS pathway, that were always turned up or down in the same cells. They homed in on two—CXCL12 and IGF1—that were not only found to be more highly expressed in tumors with SRS, but were also independently predictive of which tumors would migrate to the bone. Tumors with both genes turned up were more likely to lead to bone metastases.

But in the breast tumors with high levels of CXCL12 and IGF1, the researchers found, the genes weren’t originating from cancer cells. Tumors consist of not only cancerous cells, but also other supporting cells that are integrated into the tumors’ structure.  The gene signature, it turned out, was coming from noncancerous mesenchymal cells integrating into the breast tumor. And not only that, but CXCL12 and IGF1 were also known to be expressed by bone cells. The genes, in both cases, encoded signaling molecules called cytokines.

Biochemical experiments revealed that when the mesenchymal cells supporting a tumor have CXCL12 and IGF1 turned on, and produce lots of cytokines, nearby cancer cells are selected for SRS activation. The SRS gene signature, while it doesn’t significantly change primary breast tumor growth, makes cancerous cells slightly more sensitive to the cytokines produced by the mesenchymal cells. Then, because they are more sensitive to these cytokines, if the cells end up in bone tissue that expresses higher levels of the same cytokines, they will grow more aggressively.

“For any cancer cell, it’s dreadfully rough to survive in the body after leaving a tumor,” says Massagué. “These cells selected for being more responsive to cytokines might just have this tiny extra chance of surviving in bone, but when you’re talking about tens of thousands of cancer cells circulating in the body per day, that tiny extra chance is enough to change the odds of a metastatic tumor forming.”

Although the study was designed to look specifically at how breast cancer cells gain the ability to better survive in bone, Massagué thinks the overall conclusion—that the environment of a primary tumor can give cancer cells varied abilities to lodge in other organs—likely applies to other cancer types and metastasis sites as well.

Now, Massagué and his colleagues are following up on how the phenomenon might play out in other organs. They are also testing whether drugs affecting the SRS pathway—and how cells respond to cytokines—could make cancers less likely to spread to the bone. In mice, they’ve found that such drugs are effective at preventing metastasis, even though these drugs had previously failed at treating metastatic tumors that have already developed. Preventing metastasis therefore is the goal.