Scientists at HHMI’s Janelia Research Campus created comprehensive brain maps linking different groups of neurons to specific behaviors, using a machine-learning program that annotated more than 225 days of videos of flies – a feat that would have taken humans some 3,800 years. 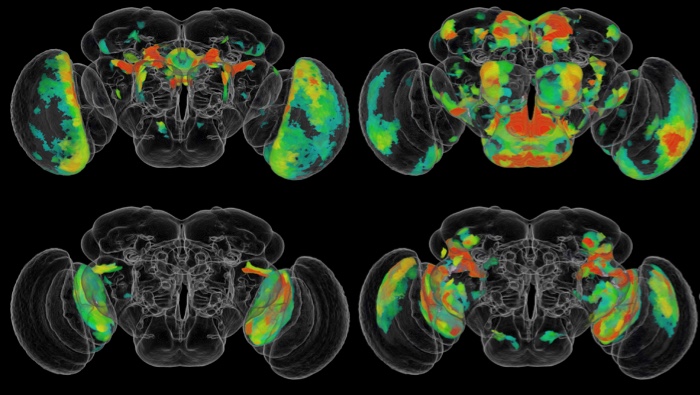 The machine-learning program tracked the position and cataloged the behaviors of 400,000 fruit flies, in more than 225 days of video footage, helping researchers match specific behaviors to different groups of neurons.

“We wanted to understand what neurons are doing at the cellular level,” says Janelia Group Leader Kristin Branson. She and colleagues reported the work July 13 in the journal Cell.

Their results are the most comprehensive neural maps of behavior yet created. Such detailed maps could give researchers a starting point for tracing the neural circuitry flies use to produce specific behaviors, such as jumping or wing grooming, Branson says. Understanding the inner workings of the fly brain could even offer insight into the neural basis of human behavior, she says.

Though the brain of the fruit fly, Drosophila melanogaster, is only about the size of a poppy seed, it comprises roughly 100,000 neurons which interact in complex circuits to control an extensive array of behaviors.

“Flies do all the things that an organism needs to do in the world,” says study coauthor Alice Robie, a research scientist at Janelia. “They have to find food, they have to escape from predators, they have to find a mate, they have to reproduce.” All those actions, she says, involve different behaviors for interacting with the environment.

Scientists have identified some of the neurons at work in courtship, say, or chasing, but no one has tackled the entire brain all at once. Branson’s team took a brain-wide approach for finding neurons involved in a suite of 14 behaviors, including wing flicking, crab walking, and attempted copulation.

The team studied 2,204 populations of flies, part of a collection developed at Janelia called the GAL4 Fly Lines. The flies are genetically engineered to crank up the activity of certain neurons. Previous imaging work, Janelia’s FlyLight Project, identified where in the brain these neurons resided – so researchers already had an anatomical map of the neurons targeted in each group of flies. But researchers didn’t know what role these neurons played in behavior.

Dialing up the neurons’ activity in one type of flies, for example, made them huddle together when placed in a shallow dish, says lab technician Jonathan Hirokawa, now a mechatronics engineer at Rockefeller University in New York City. Other types of flies acted even more bizarrely, he recalls. “Sometimes you’d get flies that would all turn in circles, or all follow one another like they were in a conga line.”

These fruit flies have been genetically engineered to crank up the activity of certain neurons, which alters their behavior: They’re more likely to touch one another than normal. A machine-learning program tracks the flies’ movement and behavior. Black lines indicate the flies’ paths and red indicates that flies are touching. Credit: Kristin Branson

From these behavioral quirks, researchers could piece together the cell types involved in walking or backing up, for example. The researchers tackled the problem in an automated fashion, Robie says. Using videos of flies, Robie taught the machine-vision and learning program JAABA, Janelia Automatic Animal Behavior Annotator, how to recognize specific behaviors. Then Branson’s team put JAABA to work watching and labeling behaviors in videos of the 2,204 different fly groups – a feat that would have taken humans some 3,800 years.

In addition to matching cell types to behaviors, the researchers identified something entirely new: the nerve cells linked to female chase behavior. “There have been some reports of female aggression, but not females chasing other flies,” Robie says. 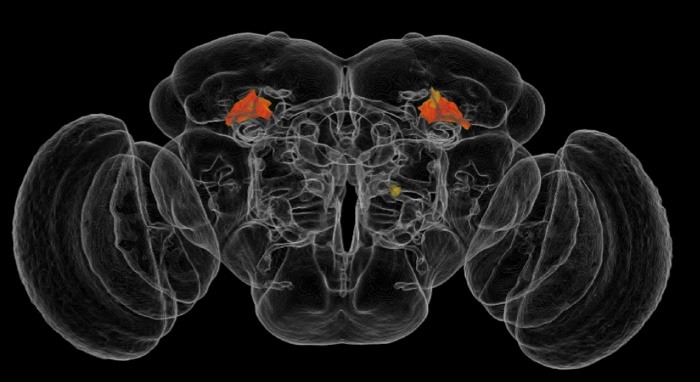 That finding stands out, Branson says, but it’s just one of thousands of results yielded by their study. “With these big datasets, we’ve been trying to figure out how you actually share the information,” she says. Their solution is a program called BABAM, or the Browsable Atlas of Behavior Anatomy Maps. With BABAM, scientists can explore the new data, create maps that link behavior to fly brain anatomy, and search for fly groups associated with certain behaviors.

Branson and Robie say the new results highlight the advantages of blending different scientific disciplines at Janelia. “This is what happens when you put biologists and computer scientists together,” Robie says.