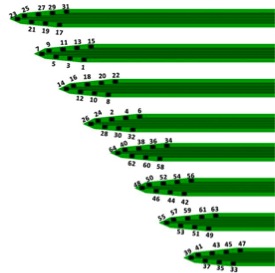 The Howard Hughes Medical Institute (HHMI), the Allen Institute for Brain Science, the Gatsby Charitable Foundation, the Wellcome Trust, and UCL (University College London) are announcing a $5.5 million (4.2 million Euro) collaboration to develop and manufacture a state-of-the-art device for detecting neural activity in animal brains. The research will be conducted in conjunction with imec, a world-leading nanoelectronics research center in Leuven, Belgium.

The proposed device builds on technology currently used to detect extracellular electrical activity in the brains of living animals, but incorporates recording electrodes at a much higher density. This allows researchers to collect more data and better interpret their results. Over the 38-month project, the group will develop and test the technology, then identify a version that can be manufactured and made available for purchase by the research community. The devices are expected to become widely available in late 2016.

“We’re launching this project because current methods for studying brain activity are inadequate,” said Tim Harris, director of the Applied Physics and Instrumentation Group at HHMI’s Janelia Farm Research Campus in Ashburn, Virginia. “Better tools will enable us to collect better quality data, and reduce the numbers of animals that are needed for this essential research. We’ve made a decision not to be incremental in improving this technology. Our goal is to advance the probe technology as far as current microelectronics fabrication capability allows.”

The world knows how to make fancy electronics now. We’ve been living in the Dark Ages.

To understand how neurons in the brain work together to process information and control behavior, researchers need better tools to monitor nerve cell activity in living animals. Neuroscientists typically rely on two methods for this: fluorescent imaging and electrophysiology. For fluorescent imaging, researchers use labeling molecules that light up in the presence of calcium, which surges when a neuron sends a signal. The approach is relatively non-invasive and provides a visual readout of neural activity, but relies on calcium as a surrogate, rather than measuring cells’ voltage changes directly. In contrast, data collected by inserting electrodes into the brain can be difficult to interpret, particularly if electrical activity is recorded at only the few sites possible with existing tools.

Animal research remains vital for furthering our understanding of the brain and provides an essential foundation for improvements in medical and veterinary knowledge. Discoveries in fundamental brain biology would not have been possible without studies in animals, which have provided insights into brain function in health and disease.

To explain the challenges of monitoring neural activity in a living animal, Harris likens the electrical activity that flickers throughout the brain to rumbles of thunder—imprecise indicators of a nearby lightning strike that, by themselves, do not provide enough information to pin down the location of the lightning. “Just because you hear thunder, you don’t know distance to the source, or if you’re hearing the result of one lightning strike or two,” he says. “The same is true when we pick up electrical signals with an electrode that’s been inserted into the brain.”

Electrical signals in the brain don’t travel far, Harris says, but in regions where neurons are densely packed, a single electrode is likely to be within “hearing distance” of more than one cell. Further, an individual neuron fires when inputs from neighboring cells push its membrane potential — the difference in voltage between the interior and exterior of the cell—above a certain threshold. So while membrane potentials continually rise and fall, not every change correlates to an actual nerve impulse.

To help resolve the origin of a nerve signal, researchers collect electrophysiology data from several nearby sites in the brain. Multiple electrodes are typically incorporated onto a single probe, and comparing the signals collected at each of these sites helps researchers interpret their data, ideally localizing the activity to a single cell. The more electrodes on the probe, the more meaningful the data, Harris says.  However, because the probe is inserted into the brain of a living animal, it must be kept small—typically less than 50 microns wide and as thin as 15 microns, much smaller than a human hair. This limits the number of electrodes that can be physically placed on the probe using the microelectronics fabrication technology available to most academic research centers and the companies that supply them. Most commercially available probes have no more than 16 recording sites, and must be connected by a long wire to external electronic receivers. A typical recording system costs about $125,000.

“The academic community has been using 30-year-old electronics fabrication techniques to produce probes for research,” Harris says. “But the world knows how to make fancy electronics now. We’ve been living in the Dark Ages.”

Janelia and the other project partners are committed to creating new tools for scientific research. Harris saw an opportunity working with imec to leverage its state-of-the-art silicon design and processing capabilities to create an innovative instrument that will provide an order of magnitude better performance than today's technology at 1/100 of the cost.  Engineers at imec will work closely with colleagues at HHMI, the Allen Institute, and UCL to design, develop, and test the new probes. The team expects to complete the project and transition to the production of probes by imec for sale to the research community within four years.

The Howard Hughes Medical Institute is a science philanthropy whose mission is to advance biomedical research and science education for the benefit of humanity. We empower exceptional scientists and students to pursue fundamental questions about living systems. Headquartered in Chevy Chase, MD, HHMI employs more than 3,000 individuals across the United States. In fiscal year 2012, HHMI invested $695 million in U.S. research and provided $78 million in grant and other support for science education.

The Gatsby Charitable Foundation was set up by David Sainsbury to realise his charitable objectives. We focus our support on a limited number of areas:

We are proactive in devising projects to achieve our aims. We are enthusiastic about supporting innovation. We are analytical as we believe it is important to understand the opportunities and problems we tackle. We take a long-term view as we do not think much can be achieved by short, one-off projects. We are always eager to form partnerships with organisations who share our goals.

The Wellcome Trust is a global charitable foundation dedicated to achieving extraordinary improvements in human and animal health. It supports the brightest minds in biomedical research and the medical humanities. The Trust’s breadth of support includes public engagement, education and the application of research to improve health. It is independent of both political and commercial interests.

University College London was established in 1826 and has a reputation for academic excellence in both teaching and research. It has major strengths in Biomedical research including the largest grouping of neuroscience laboratories in the UK.

Imec performs world-leading research in nanoelectronics. Imec leverages its scientific knowledge with the innovative power of its global partnerships in ICT, healthcare and energy. Imec delivers industry-relevant technology solutions. In a unique high-tech environment, its international top talent is committed to providing the building blocks for a better life in a sustainable society. Imec is headquartered in Leuven, Belgium, and has offices in Belgium, the Netherlands, Taiwan, US, China, India and Japan. Its staff of more than 2,000 people includes more than 650 industrial residents and guest researchers. In 2012, imec's revenue (P&L) totaled 320 million euro. Further information on imec can be found at www.imec.be.