44 Gilliam Fellowships Awarded to Support Diversity and Inclusion in Science

A good scientific mentor can help students navigate different career paths and plug them into new networks. A mentor can be a sounding board and an advocate – and they can also make the experience of being a scientist more fun.

That’s a goal of biologist Samara Reck-Peterson, one of 44 advisers the Howard Hughes Medical Institute (HHMI) has selected for the 2019 Gilliam Fellowships for Advanced Study. Each adviser was chosen as part of an adviser-student pair and is committed to building inclusive lab environments and helping increase diversity among the next generation of scientists. 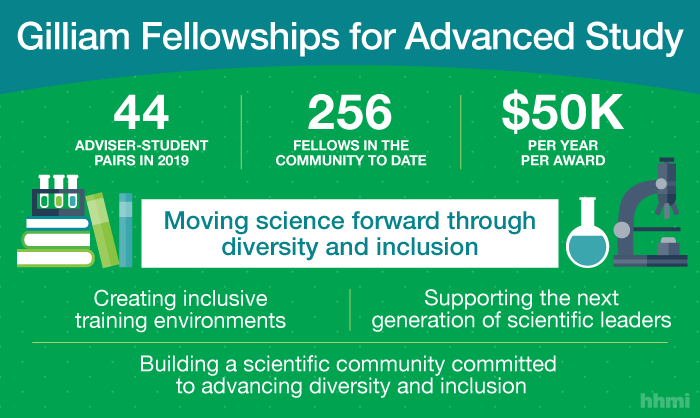 “I want to help my team enjoy scientific discovery and make it a fun process for everyone I work with,” says Reck-Peterson, an HHMI investigator at the University of California, San Diego (UCSD). She thinks the Gilliam program’s emphasis on mentoring will help. Her fellow, Donte “Alex” Stevens, is studying the molecular machines that drive transport within cells and how these machines interact with pathogens.

Stevens and the other new Gilliam Fellows join a community that now totals 256 outstanding young scientists, says David Asai, HHMI’s senior director for science education. This year’s fellows represent dozens of schools across the country, from the University of Arizona to Vanderbilt University in Tennessee. The fellows also come from racial, ethnic, or other groups underrepresented in the sciences.

Each fellow submitted a career statement describing how their personal experiences and training inform their science, and how they plan to make scientific culture more inclusive. Asai says the fellows all show promise as scientists. “The Gilliam program is aimed at people who will become leaders in science,” he says. “We’re trying to change the face of university faculty, so students see leaders of all different backgrounds.”

“We’re trying to change the face of university faculty, so students see leaders of all different backgrounds.”

But for students to thrive, a good training environment is crucial, he says. That’s where the program’s mentoring component comes in. Along with a $50,000 annual award for up to three years for each adviser-student pair, advisers will participate in a year of mentor training focused on cultural awareness. Over the past four years, more than 130 advisers have taken part; activities include online training and two in-person workshops at HHMI headquarters in Chevy Chase, Maryland.

It’s an intensive experience, says HHMI Investigator Erich Jarvis, who was selected along with his student, Cesar Vargas, for a Gilliam Fellowship in 2018. “This is not your usual fellowship,” he says. “You put in a good amount of effort not only mentoring your student, but also learning how to be a mentor.”

At one of the 2018 Gilliam workshops, the idea of recognizing different people’s cultural backgrounds and experiences stuck with Jarvis, a neurobiologist at The Rockefeller University. His advice for other mentors: “Don’t assume your students know how to navigate the scientific community. You have to train them how to do that.” 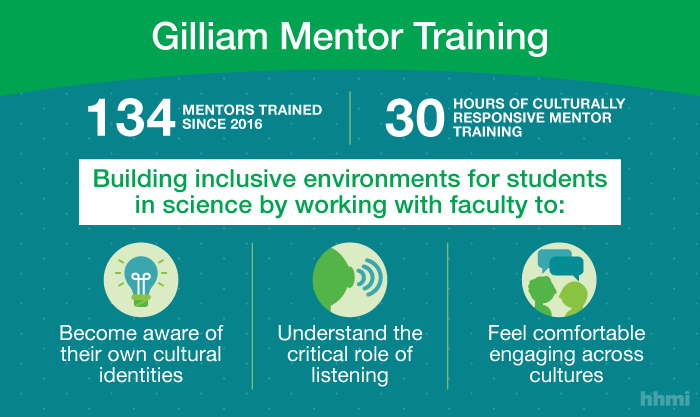 Last year, mentors spent $4,000 of their awards to address challenges to diversity and inclusion at the graduate level. Jarvis used half the money to support an undergraduate who comes from a group underrepresented in science to learn how to do experiments with the Gilliam student as their mentor. He put the other half toward a student-run diversity committee at Rockefeller that invites speakers to talk about the science of diversity.

At the University of North Carolina at Chapel Hill, cell biologist Ben Major, mentor to a 2016 and a 2018 Gilliam Fellow, is using the money to recruit faculty candidates who are from underrepresented groups. “I saw an opportunity to target the crazy disparity that most universities have at the faculty level,” says Major, now at Washington University in St. Louis. “That’s a problem that I think we should pay more attention to.”

Asai hopes that these activities and the Gilliam program’s emphasis on mentoring will have a ripple effect throughout academia – and change faculty behavior. Improving listening skills, understanding cultural identities, and learning to talk about differences can make scientists better mentors, he says. And that can help keep students in science.

UCSD’s Reck-Peterson is looking forward to her upcoming training. She’s thought a lot about mentoring during her career and has taken courses, led workshops, and even contributed to a book for postdocs and faculty. But, she says, “One of the most important things I’ve learned is that you’re never done learning how to become a good mentor.”

HHMI created the Gilliam Fellowships for Advanced Study in honor of the late James H. Gilliam, Jr. A charter trustee of HHMI, Gilliam was a respected business and civic leader who spent his life nurturing excellence and diversity in science and education.