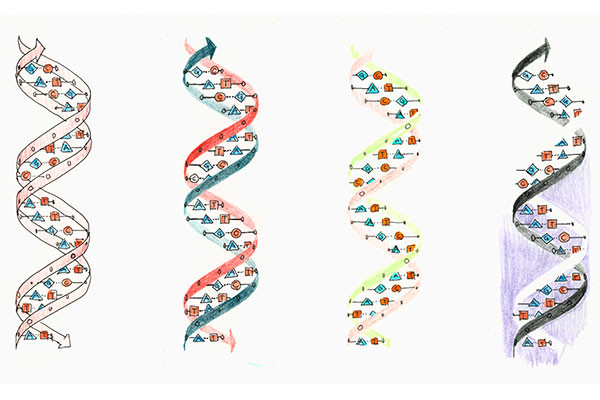 Techniques known as Sanger sequencing and whole exome sequencing are great tools for identifying defective genes that are present in all of an individual’s cells. But they aren’t as reliable when mutations occur in just a few cells. Although not as common, these “mosaic” mutations are increasingly recognized as a cause of disease, especially in the brain. “If a mutation is in only 5 or 10 percent of the cells, then that’s going to be in a very small fraction of the data, which will be hard to separate from the noise,” explains HHMI Investigator Christopher Walsh of Boston Children’s Hospital.

To overcome that challenge, Walsh and his colleagues developed a new strategy that flushes out these hard-to-find mutations. The team focused on a set of genes associated with brain malformations. They isolated DNA from patients with unexplained brain malformations and then sequenced each of these genes hundreds to thousands of times.

“We said we’d shoot to sequence them a thousand times over,” Walsh says, “thinking that if a mutation is only present in 5 percent of the cells, it will be obvious that it’s a mutation, because we’ll see that mutation 50 times.” The team reported August 21, 2014, in the New England Journal of Medicine that they had found disease-causing mutations in more than a quarter of the patients in their study, demonstrating the effectiveness of their method and further supporting the idea that mosaic mutations are an important cause of diseases that affect just a part of the body.