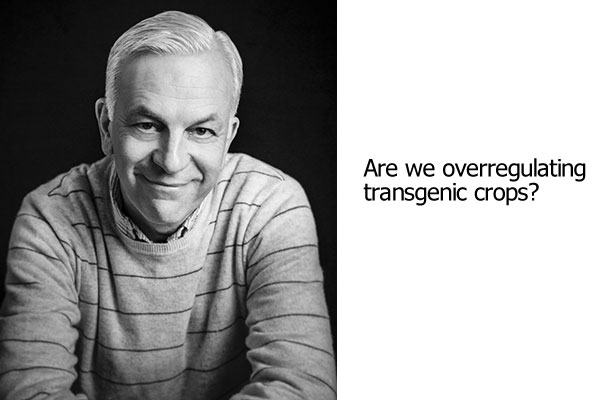 In the United States, as in most countries, genetically modified crops are heavily regulated at every stage of their development—from research through marketing. While oversight is valuable, too much can be detrimental, believes HHMI-GBMF Investigator Jorge Dubcovsky. He explains why our current approach to transgenic regulation may not be in society’s best interest.

Why are people afraid of GMOs?

People don’t know what GMOs, genetically modified organisms, are. They just know somebody is messing with their food and worry whether that person has good or bad intentions. Though fear is sometimes irrational, it’s valid to fear what you don’t know—we need to respect that feeling.

Unfortunately, governments often respond to such fear by increasing regulation. In the case of wheat, for example, the testing and regulatory process is so burdensome it’s almost impossible for public breeding programs—at land-grant universities or the Department of Agriculture—to release transgenics. It’s okay to regulate GMOs, but currently we regulate the technology, not the products. We should look at what we’re putting in the plant, not how it’s made.

What’s wrong with regulating the technology?

It’s irrational. If I add a new wheat gene to a wheat seed to increase its resistance to disease or its nutritional value, the resulting plant is considered transgenic. Even if it has no foreign DNA, the new variety can be released only after lengthy and expensive tests. But if I achieve the same result by random mutagenesis or by recombination of a wheat chromosome with a related wild species, it’s not considered a GMO, and I don’t pay a cent.

Using the same process, you can make harmless products, like more nutritious varieties of wheat, or products with higher risk, like plants that express part of a virus to confer resistance against pathogens. I don’t see the logic, scientifically speaking, of regulating the process rather than the product.

What are the consequences of regulating the process?

It’s now so difficult to develop transgenic crops and so expensive to release them that public breeding programs can’t afford to do so. This poses a risk that large corporations could control the seed market—and they may make decisions based on the bottom line rather than public benefit.

Fortunately, we’re not in that situation yet, at least for wheat. In 2012, roughly 68 percent of the wheat planted in the U.S. represented varieties produced by the public sector. But in the future, if current regulations remain in place, the public wheat-breeding sector won’t be able to compete. Overregulation could lead to big companies controlling the seed supply. Keeping public-sector involvement offers several advantages. Public breeding programs help train new plant breeders; they serve as a backup for industry efforts; and they can focus on longer-term goals, like increasing crop diversity, and on traits not economically attractive to corporations.

How can we improve things?

I believe a hybrid model, with both public- and private-sector breeding programs, offers the right balance. The public sector has freedom to explore traits beneficial to consumers, while companies are generally better at distributing and selling seeds and can bring additional resources to breeding efforts. We have a system like that in California, and it works well. Companies get new technology and germplasm from public breeding programs, growers get the best seeds, and society gets improved products and reduced use of fungicides and pesticides.

I also believe public breeders can help ease fear of transgenic crops. For example, we can create transgenics by introducing DNA only from the same or related species (processes known as “cisgenics” and “intragenics”). Or we can use approaches known as RNA interference and CRISPR, which just knock out certain genes. Such applications eliminate introduction of foreign DNA, so may reduce the fear, but they’re still very powerful. For example, RNA interference can be used to reduce gluten intolerance and increase the fiber in a grain. If regulations are reduced for these less controversial technologies, public researchers can use them to generate useful products.

Are things likely to change?

Yes, people’s fear will likely diminish. There were similar concerns many years ago when growers introduced hybrid crops. Today, nobody cares about hybrids. Genetic engineering is a powerful technology. It lets us do lots of positive things in a faster, more efficient, very controlled way. And it’s happening. If you look at maize and soybeans, most acreage in the U.S. and elsewhere is now planted with transgenic varieties—but no big cataclysm has occurred, reducing the traction of the “we haven’t proved it’s safe” argument. We can’t prove planes are safe, either, yet we still fly.

Everything has risk. What we need to do is evaluate the balance between risk and benefit. Seven billion people need to eat every day.