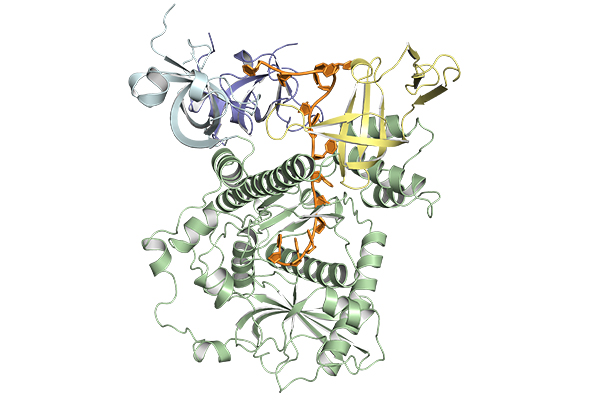 The Protein at the End of the Tunnel
by Ashley P. Taylor

Scientists reveal the structure of a protein that performs the final step in an iconic and long-studied signaling pathway in cells.

Embryonic development and cancer may seem wildly different, but it turns out they have a lot in common. A Rube Goldberg-like cell signaling pathway that scientists have been studying for 30 years holds the key to the unlikely connection. New research from HHMI Investigator Leemor Joshua-Tor at Cold Spring Harbor Laboratory has characterized the end point in that pathway.

One similarity between cancer cells and the undifferentiated stem cells of an embryo is a microRNA molecule called let-7, which is destroyed in both cases. MicroRNAs prevent certain genes from being expressed and translated into proteins; the let-7 microRNA turns off genes that promote cell division. Without let-7, cells keep dividing—allowing the expansion of embryonic cells or, later in life, of cancers.

A microRNA begins as a stretch of self-complementary RNA that folds up on itself like Velcro, forming a double-stranded molecule with a loop at the end called a microRNA precursor. This precursor is then processed to form a 22-nucleotide microRNA that targets protein-coding messenger RNAs, either preventing their translation into proteins or leading to their degradation. In cancers and in stem cells, let-7 doesn’t make it to maturity because its precursor is marked for destruction by a “tail” of uridine bases—the U’s in the genetic alphabet. Another protein, Dis3l2, recognizes this polyU tail and degrades it, along with the let-7 RNA precursor.

Joshua-Tor’s lab group used x-ray crystallography to identify the structure of Dis3l2 bound to a string of U’s, like those that tag let-7 for degradation. As they reported in Nature on October 9, 2014, her team found that the RNA fits into a funnel-shaped cavity in Dis3l2. Within the mouth of the funnel and along its narrow end, Dis3l2 makes uridine-specific contacts with let-7’s tail—not just recognizing the tail as RNA but “reading” its individual letters.

“Seeing how many bases are read in a row is quite unusual,” says Joshua-Tor. Once Dis3l2 makes its contacts along the string of U’s, it begins to break down the RNA, letter by letter, until the entire let-7 precursor is destroyed. “Once it gets going, it just chews it all up,” she says.

A Path of Twists and Turns

The demise of let-7 is the end point of a complex signaling pathway set in motion by a protein called Lin28.

The story of that pathway begins in the mid-1980s, in the Massachusetts Institute of Technology lab of H. Robert Horvitz, now an HHMI investigator. Horvitz’s postdoc Victor Ambros was looking for genes that alter development in the roundworm Caenorhabditis elegans. In the mutants that Ambros (now at the University of Massachusetts Medical School) and Horvitz were studying, worms either fell behind or jumped ahead developmentally. One of the genes they identified was lin-28; worms in which the gene was defective jumped ahead in development.

Similarly, in both mice and humans, the Lin28 protein is abundant in embryonic cells but lessens throughout development, becoming undetectable in fully differentiated cells.

In 2000, let-7 came onto the scene when Gary Ruvkun, at Harvard Medical School, reported that in worms, a loss of let-7 had an effect opposite to a loss of lin-28: it caused differentiated cells to revert to earlier developmental stages. Ruvkun also identified let-7 as a microRNA—the second ever discovered (after C. elegans’ lin-4, which Ambros discovered). Let-7 targets lin-28 messenger RNA, repressing its gene activity. Ruvkun published a second paper in 2000 showing that the let-7 microRNA is conserved across most organisms, including humans.

A Rube Goldberg-like cell signaling pathway that scientists have been studying for 30 years holds the key to an unlikely connection between development and cancer.

Lin28 soon found a practical application. In 2007, scientists reported that turning on four genes, including lin-28, in human fibroblast cells returned the cells to an embryonic state—essentially, into stem cells.

But though Lin28 and let-7 were known to have opposite effects on differentiation, their relationship was unclear. It was in 2008 that Richard Gregory and HHMI Investigator George Daley, at Boston Children’s Hospital, collaborated to show at the molecular level that Lin28 represses let-7 maturation.

“To preserve the stemness, or pluripotency, of the cell,” explains Joshua-Tor, referring to stem cells’ ability to differentiate into many cell types, “you have to downregulate let-7, and the way the cell does that is by making Lin28.”

Soon afterward, Narry Kim at Seoul National University reported exactly how Lin28 turns off let-7: by promoting the addition of the polyU tail. And by 2009, the Kim and Gregory labs had found the enzyme, called a TUTase, responsible for adding the tail.

As the Lin28/let-7 pathway was being elucidated, evidence was also mounting for a link between that pathway and cancer. In 2009, Daley’s lab team found Lin28’s two human homologs in 15 percent of human cancers. In addition, overexpression of Lin28 led to the repression of let-7 and, consequently, the upregulation of the growth-promoting genes that let-7 normally keeps in check.

The findings help to explain the connection between cancer and embryonic development, says Daley. “There’s a yin and yang between the Lin28 RNA binding protein and its main target, the let-7 microRNA,” he explains. “This yin-yang is carefully orchestrated during organismal and tissue development and [is] dysregulated in cancer formation.”

The stem cell-cancer link was strengthened further when, in 2013, Gregory identified Dis3l2 as the protein that degrades uridine-tagged let-7 in mouse stem cells. It turns out that Dis3l2’s human counterpart is mutated in Perlman syndrome, a genetic disease that leads to fetal overgrowth and a predisposition to a certain kidney tumor. It is also the protein whose crystal structure Joshua-Tor determined.

Researchers may now want to see if Dis3l2 degrades uridine-tagged RNA molecules other than let-7. “It’s unlikely that this enzyme exists solely to degrade the precursor to let-7,” Gregory says. “There must be some other relevant RNA substrates.” As Daley notes, many messenger RNA molecules have polyU tails. Could Dis3l2 act on them, too? “There’s at least the provocative possibility,” he says.