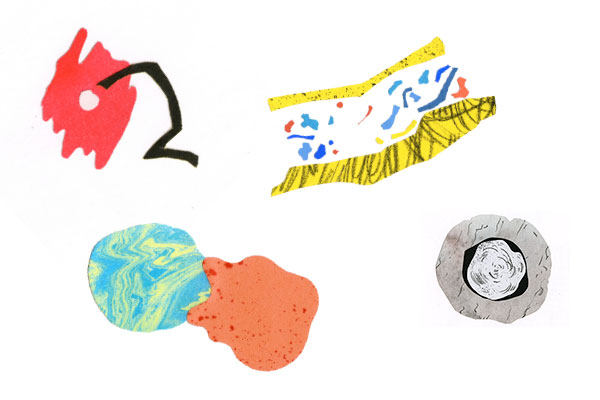 Microscopes for the Masses
by Nicole Kresge

At Janelia, scientists build tools. Some are small and easy to share: sensors that can be purchased, software that can be downloaded, websites that can be visited. Others, like innovative microscopes, are not. These hulking collections of lenses, mirrors, lasers, and electronics need to be precisely aligned and bolted to 800-pound optical tables. Furthermore, many are prototypes, meaning that outside scientists like Hernán López-Schier of Helmholtz Zentrum München in Munich, Germany, have little access to them.

López-Schier uses zebrafish to study nerve cells that transmit sensory information to the organism’s brain. By cutting an axon—a threadlike extension of a nerve cell—with a laser and watching its recovery under a microscope, López-Schier learns how Schwann cells—which insulate and maintain axons—respond to the damage. With commercially available microscopes, he can get a general idea of the process. But to see it in detail, he needs a machine that can capture the action at high speed, in a live fish, without damaging its tissue.

Fortunately for López-Schier, the Janelia Advanced Imaging Center (AIC) recently opened its doors, offering access to the microscopes built at the Ashburn, Virginia, research campus. “Janelia is a tool-building place, and we want our tools to be used,” explains Janelia Executive Director Gerry Rubin. “Our goal is to enable cutting-edge work by providing people with instruments that just didn’t exist before.” 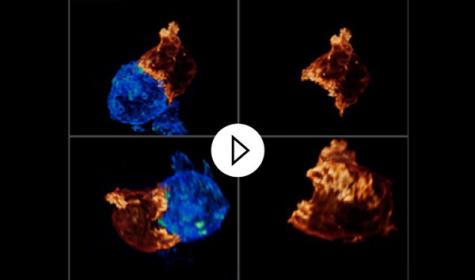 Lattice light sheet microscope Invented by Janelia Group Leader Eric Betzig, this microscope allows users to peer inside living cells, giving them the ability to create detailed, three-dimensional movies of biological processes like this one showing a T cell (orange) approaching an antigen presenting cell (blue). The images were acquired every 1.3 sec over 430 time points. Play the video. 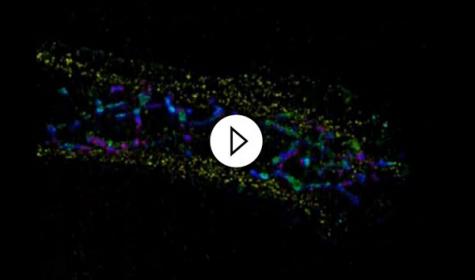 Interferometric photoactivated localization microscope (iPALM) Developed by Janelia Group Leader Harald Hess, the iPALM is especially suited for high-resolution studies of how molecules interact with each other, such as in a signaling complex. This video shows a three-dimensional rendering of a human bone osteosarcoma cell. Taken from C. Henry Arnaud, Chem. Eng. News, 87 (36), pp 69–71 (2009). Play the video. 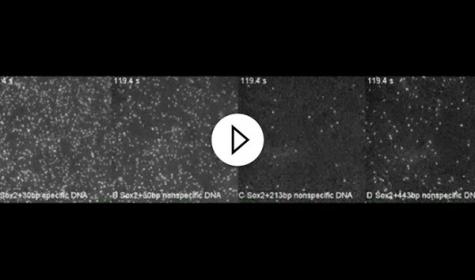 Single molecule total internal reflection fluorescence microscope (smTIRF) Used for in vitro imaging of complex biochemical reactions like DNA transcription, the smTIRF was designed and constructed by the research teams led by HHMI President Robert Tjian and physicist Steven Chu of Stanford University. This video shows the smTIRF being used to view how the Sox2 transcription factor binds to DNA targets with varying affinity. From Chen, et al., Cell 156(6), 1274–1285 (2014). Play the video. 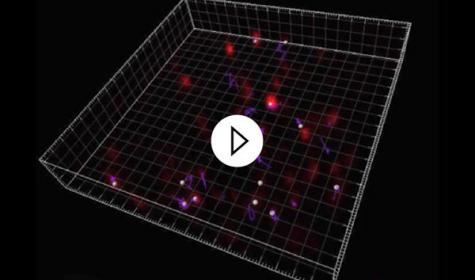 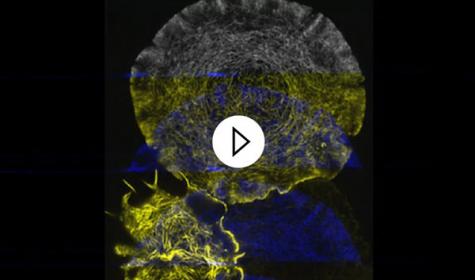 Live cell multicolor structured illumination microscope (SIM) Also developed by Mats Gustafsson, the AIC’s SIM is one of the fastest instruments of its kind and is capable of doing three-dimensional, multicolor, high-resolution imaging, making it ideal for observing macromolecular interactions and subcellular structures in a live cell, like the α-actinin seen in these mouse embryonic fibroblasts. Play the video.

The AIC is a joint venture between HHMI and the Gordon and Betty Moore Foundation (GBMF). It houses five microscopes (see sidebar, “A Spectrum of Tools”) and has a support staff of four scientists to help carry out experiments. “GBMF was already interested in imaging and is funding several groups developing new microscopes. Together, we concluded that providing widespread access to prototypes of new instruments would be very complementary to our ongoing activities,” says Rubin.

Whenever a call for proposals goes out from the AIC, experimental biologists anywhere in the world can submit an application to use its microscopes. Successful applicants are given free lodging at Janelia and access to all the scientific facilities on campus. The first round of proposals included studying microfluidic devices, squid hatchlings, transgenic moss, and bacterial membranes.

“We want to encourage scientists from fields that historically don’t leverage advanced microscopy in their work,” explains the center’s director, Teng-Leong Chew. The AIC is targeting users who lack access either to cutting-edge imaging instruments or to a support team versed in the latest microscopy techniques.

And by pushing the microscopes’ experimental limits, users can also provide valuable feedback to the builders. “In a way, AIC becomes the convergent point where biology meets engineering,” explains Chew. “It’s not just that Janelia puts forward this really wonderful equipment for science to use; it’s also that the visitors will inform the continued development of the instruments.” Their feedback will help further refine the microscopes and enable the instruments to be used in a variety of ways in the life sciences. The hope is that, eventually, some AIC prototypes will be fine-tuned to a point where they might be commercialized for broader distribution.

López-Schier was one of the first scientists to use the AIC’s lattice light sheet microscope to look at a fish. But adapting his relatively large sample to the microscope proved a challenge. “Initially, we couldn’t image anything because we couldn’t make the fish fit within the holder that would place it under the objective lenses of the microscope,” recalls López-Schier. But he and the AIC support team spent a couple of days modifying the mounting procedure and were able to make it work. 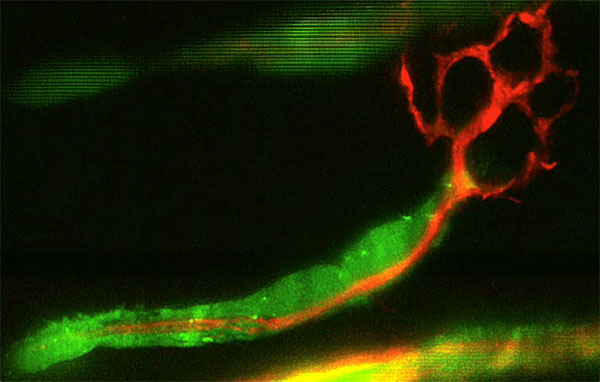 He was rewarded with live video of Schwann cells repairing damaged axons. The footage revealed that the cells eat up dead axons, a process known as phagocytosis. “With the lattice light sheet microscope, we could actually see these intracellular vacuoles forming from the phagocytic activity of the Schwann cells as they consumed the dead axons,” he explains.

Back in Germany, López-Schier has submitted a paper with his results. He also has his sights set on building a similar microscope in Munich.